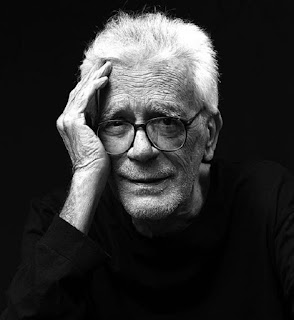 I arrived in San Francisco just in time to catch the tail end of the Pacific Film Archive's retrospective "Eduardo Coutinho: A Cinema of Listening", highlighting the documentary artistry of Brazilian filmmaker Eduardo Coutinho. This tribute to Eduardo Coutinho was curated by Natalia Brizuela, associate professor in the Department of Spanish and Portuguese at UC Berkeley, in conjunction with the publication of a special issue of Film Quarterly dedicated to Coutinho. Both the series and the magazine seek to redress the unfamiliarity North American audiences have with Coutinho's body of work.

Although I missed most of the retrospective, I was able to participate in the two final films of the series—The End and the Beginning (O fim e o princípio, 2006) and Last Conversations (Últimas conversas, 2015)—introduced and moderated by João Moreira Salles, one of the most important Brazilian documentary filmmakers of his generation, who was the executive producer for seven of Coutinho's most recent films through his VideoFilmes production company. Salles completed Coutinho's final, unfinished work, Last Conversations. 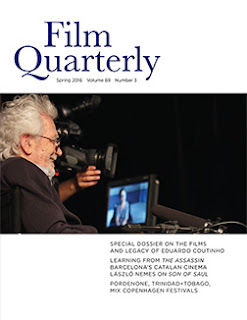 The Film Quarterly dossier on Coutinho is a masterful contribution to any deep understanding of Coutinho's work and was generously provided to participants of the series. Otherwise it is only available through subscription. Fortunately, Editor B. Ruby Rich's introduction and Guest Curator Brizuela's essay "Conversation and Duration in Eduardo Coutinho's Films" are available at the magazine's website.

Michael Guillén: What strikes me about the beauty Coutinho has captured in The End and the Beginning is his desire to know these people. His desire is like an arrow of intention aimed at the soul of these people. He truly is someone who learns about people from the inside out, which distinguishes him from most journalists or documentarians who approach people at their surface and then try to get to their depth. Coutinho aims for their depth and achieves it immediately, which I noticed especially when he first approached the atheist. We can see that initially the atheist is going to rebuff him, but he then relaxes in Coutinho's presence and becomes engaged in conversation, realizing he has been recognized. One of the elderly subjects in The End and the Beginning, the woman with whom Coutinho establishes an erotic friendship, makes a point of referencing his kindness. Since you know him personally, can you describe Coutinho's particular kindness?

Coutinho was ill-suited for life. He was very bad at life. He was. He couldn't function in life how he could function doing film. Making film was the only moment when he was in control and a happy person. Outside of filming, he was a deeply unhappy person with huge problems in his own house, in his own relationships, and so in a very concrete way, without being heroic, films saved him because filmmaking is what kept him alive.

The people who were talking to him could sense that each conversation was extremely important. This may be the highest form of kindness because it is as if he were saying, "Your story interests me." Coutinho was not interested at all in what he called "Os grandes homens e mulheres da história [the great men and women of history]." He didn't want to film "important" people. He never did that. He never filmed politicians, musicians, never, because he thought these people would not connect with him because the world already recognized them. What really interested him were people who were not extraordinary but had extraordinary ways of telling their own banal lives. When that happens to someone who has never been seen as extraordinary, who suddenly tells a story that is received with such—not excitement, because Coutinho was not excited—but with such deep curiousity, they felt loved in a way.

So his kindness was not the cuddly kind. He would not touch. But he would be there as an equal. Look at the camera work and you will see that all of his characters don't look at the camera; they look at him. The connection is between two people. It is a human connection. It's not a connection through a camera. He's close to his subjects. He's never far away. The camera is there, but he's talking to them—as he says in this documentary—"at a just distance", which is a distance within which human interaction occurs. He says, "This is the distance, two meters, three meters, in which life occurs, in which people love each other and kill each other." It is truly a human experience of interest, curiosity and love and that's what I think was his kindness.

Guillén: The closing image of The End and The Beginning is the empty table and the closing image of Last Conversations is the empty chairs. Can you speak to what Coutinho intended in framing emptiness? Also, I'd like to have you unpack his statement—when he was feeling the disconnect with the students—that all he had to give them was his eyes and his body, which gave me a shiver when he said that.

Salles: Starting with your last question, at some point I would urge you—I mean, those who are interested in Coutinho—to watch the documentary about him, which is just a conversation with him. But he is so alive, so beautiful, speaking. His ideas about film are so strikingly original that everyone who likes Coutinho and non-fiction film would benefit from watching it. In it, he says that stories don't happen only through words and sound; they happen also through the body in the way bodies speak to each other. A relationship exists when a story is told because you have proximity. You have someone, a human being, with his or her body, with its eyes, its smells, next to another body with its smells, its shape, its movements, and with its eyes.

Therefore, when he is saying, "I can only give my eyes and my body", that's what he's saying: "I'm there. And yet this time it doesn't seem to be enough because—although I'm there and although I'm repeating all the rituals of my filmmaking, which is proximity, an eye that looks into another eye—there's something hollow inside." He was saying, "Something is lacking here." But I think he was wrong. As you watch the film, you see the connection occurring. He is giving his eye and it is being received by another eye. That's what I believe he meant by that statement.

As for your first question about the emptiness, Coutinho loved empty spaces. In his first films Cabra Marcado Para Morrer (Man Marked For Death Twenty Years Later, 1984) and The Mighty Spirit (Santo Forte, 1999), there are a lot of images of empty rooms. The idea is that in this empty room or in this empty chair imagination flows and you can imagine what is happening there without him having to show it. Here in Last Conversations, as in his last films, the idea is that life goes on outside of the frame. I'm just speculating here, right?

Natalia Brizuela: But also there's his idea that silence is when you think. Silence has the lack of that other thing that is important, which is words.

Salles: I think you're right about that; but, one important thing about Coutinho is his idea that you can never finish a story. He loved everything that was unfinished. He hated perfection. One of the things that he says in the documentary about him is: "I hate perfection and I hate purity. I like everything that is not pure and that is not perfect." The idea is that you can never have the colonial idea of occupying a whole story and telling the whole thing; there's always something that's missing. Playing (Jogo de cena, 2007) also ends with an empty chair and the idea is: "I have told you part of the story and this empty chair, if I keep on filming somebody else that you don't know will sit here and will tell another story that you haven't heard. There are millions and millions of experiences that I will not be able to tell you." That's the idea behind the empty images: they leave space for something lacking.
Posted by Michael Guillen at 5/05/2016 12:05:00 PM