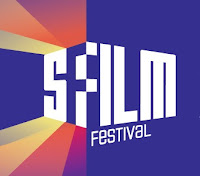 The San Francisco International Film Festival (SFIFF), heralded as the oldest annual film festival in North America, shifts into its 59th edition (April 21-May 5, 2016) steeped in history but with its sights aimed on the future. Relocating its hub away from the Japantown venues it has used for the past 20 years to San Francisco's Mission District, SFIFF seeks to triangulate its venues between the Alamo Drafthouse New Mission (where a $10,000,000 retrofit reveals itself in every detail), the Victoria Theatre (where SFIFF has likewise invested in major improvements to the theater's sound and projection systems), and longstanding favorite the Roxie Theatre, all the while remaining allegiant to San Francisco's historic movie palace the Castro Theatre, which hosts the festival's "big nights". Between these four venues, festival-goers have the opportunity to catch 175 films from 46 countries, sample the Alamo Drafthouse's full service bar and kitchen, and/or explore the multiple eateries available on both Mission Street and the Valencia Corridor. 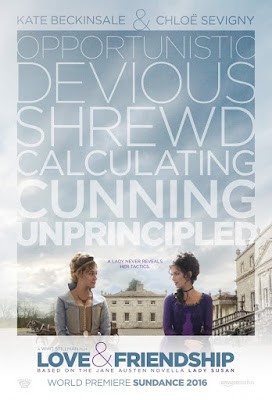 Week one of SFIFF launched at the Castro Theatre with the opening selection of Whit Stillman's Love & Friendship (2016) wherein actresses Kate Beckinsale and Chloë Sevigny reunite 18 years after co-starring in Stillman's The Last Days of Disco (1998). Based on Jane Austen's novella Lady Susan, Love & Friendship is a frothy, clever wink "at contemporary pretensions through the lens of the past." Of particular note is the supporting turn of Tom Bennett as Sir James Martin, a bungling, clueless suitor of Lady Susan's daughter, who Stillman recognized early in production as one of the film's winning attributes, resulting in additional lines and scenes for the character. Stillman and Beckinsale were on hand to add a spectacular dimension to SFIFF's opening night festivities, which were already buzzing with anticipation. Picked up by Amazon and Roadside Attractions, Love & Friendship opens theatrically mid-May. 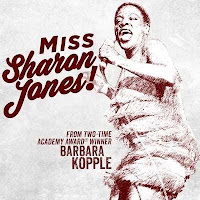 Screening the following night at the Castro was Barbara Kopple's documentary portrait of dynamic soul vocalist Miss Sharon Jones! (2015), lead singer for Sharon Jones & The Dap Kings. Kopple's documentary exceeded expectations, richly layered with concert footage, combined with an emotional rollercoaster narrative of a remarkable woman's will to recover from pancreatic cancer and her determined struggle to return and enjoy a successful concert career she worked years to achieve. The film likewise delivers a poignant exploration of the tentative security of professional musicians, namely the Dap Kings, whose own careers are held in abeyance as they await the results of Jones's chemotherapy, though determined to support her at every stage of her recovery. On a restricted diet for many months until her health improved, one of the film's most hilarious scenes is watching Jones devour a pulled pork sandwich, refusing to speak to anyone until she is done. Her return to the stage is triumphant. 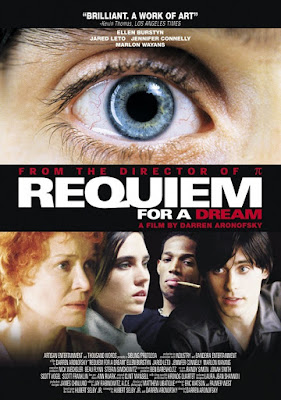 Each year SFIFF endows the Peter J. Owens Award to an actor or actress whose work exemplifies brilliance, independence and integrity. Peter J. Owens (1936-1991) was an actor, a film producer, a philanthropist and an important supporter of the San Francisco Film Society. This year's recipient was Ellen Burstyn who was fêted with a clip reel of career highlights, an onstage conversation with Noah Cowan, Executive Director of the San Francisco Film Society, and a revival screening of Darren Aronofsky's Requiem For A Dream (2000), which earned Burstyn multiple awards, and an Oscar® nomination for Best Actress, for her harrowing performance as meth-addled Sara Goldfarb. This intimate event revealed a forceful personality who at 83 years of age exemplifies the best of her craft. In his introduction to their onstage conversation, Cowan noted that when it came to Ellen Burstyn, it was difficult to avoid her "triple crown". She's one of the few performers who has won an Emmy®, an Oscar®, and a Tony®. In reviewing her work, he found her performances "daring, gutsy, and impressively diverse." Asked to speak about her characterization of Sara Goldfarb in Requiem, Burstyn responded: "Basically, Sara Goldfarb is like all of us. She had desire to be more, experience more, be loved, be looked at and seen. Those are rich things to play with and to work on."

Traditionally, each edition of SFIFF spotlights welcome restorations and, for their 59th, SFIFF programmed Lewis Gilbert's Cast A Dark Shadow (1955). Gilbert, better known for securing star status for Michael Caine in Alfie (1966), likewise directed three James Bond films, as well as arthouse favorites Educating Rita (1983) and Shirley Valentine (1989). Cast A Dark Shadow features a youthful Dirk Bogarde as an unhinged homme fatale marrying (and murdering) elderly women for their money. He meets his match, however, in the equally calculating Margaret Lockwood, whose performance—considered at the time "over the hill" by no less than Gilbert himself—can now be seen for its remarkable acuity in this immaculate black-and-white restoration. 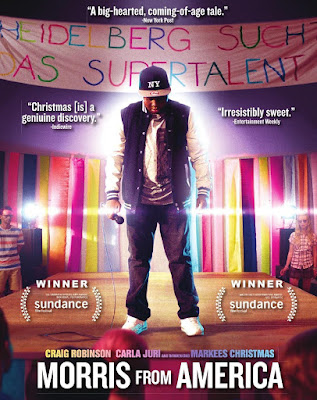 Chad Hartigan's Sundance winner Morris from America (2016) charmed and titillated its audience with a fish-out-of-water tale of 13-year-old Morris (in an engaging breakout performance by Markees Christmas) coming of age in Heidelberg, Germany. I wasn't completely sold by Hartigan's narrative, though sufficiently so to appreciate its moments of sweet-and-sour teenage revelation and, particularly, the admirable sense of comic timing built into Anne Fabini's editing. Director Hartigan and his young discovery attended the festival to interact with their audience.

Also representing a coming-of-age, is Michel Gondry's fanciful, engaging and above all tender film Microbe & Gasoline (2015), wherein newcomers Ange Dargent and Theophile Baquet confirm their misfit bond as they seek love and adventure in their makeshift house on wheels (with potted geraniums no less!). Microbe's haircut in a Korean whorehouse is not to be missed! Soon to be parking at a theater near you. 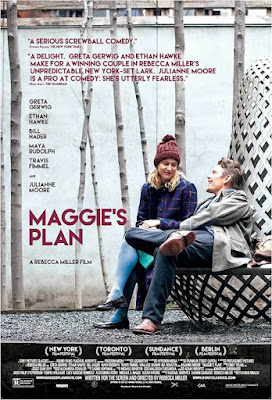 Contrary to the surface plot of Federico Vieroj's wry The Apostate (2015), it's not really a religious movie, or merely a critique of the Catholic Church. As Vieroj stated to me in an interview conducted earlier: "To apostatize is not something that you do just with religion. You can do it with your life. It's about embarking on life's journey on your own terms." In Vieroj's epistolary fable, his protagonist Gonzalo (played by first-time actor and co-scenarist Álvaro Ogalla, who accompanied the film to SFIFF) reveals through his defiant gesture that we are all fighting, as José Teodoro has written, "with forces that have for some people replaced religion: the monitoring of everything, the erosion of privacy, and so forth." Indeed, the Catholic Church stands in for Big Data in The Apostate, which inspires richly-layered interpretations.

Georgian cinema has been well-represented in the San Francisco Bay Area. Recently, Pacific Film Archive curator Susan Oxtoby organized a year-long retrospective that is now touring the country. SFIFF59 has followed her lead by featuring Vano Burduli's The Summer of Frozen Fountains (2015) in its Global Visions sidebar. Tbilisi has, perhaps, never looked as beautiful as filmed here by cinematographer Goga Devdariani, who evokes a romantic aura from balcony views of the city's intimate neighborhoods and their cobbled streets. Something of an ethnographic imaginary is constructed, where the multiple perspectives of a large ensemble of characters crisscross the narratives of their lives in such a way that the viewer gets a spatial feel for the city and its inhabitants. Burduli's desultory narrative is interlaced, delicately braiding such timeless subjects as longing, love, and a flawed yet tender humanity. 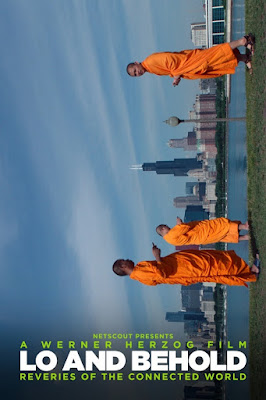 Documentaries have always been strong in SFIFF's line-up each year and particularly this year as eleven contestants compete for the juried Golden Gate Documentary Feature Award. Though not contestants in that group, two documentaries caught my interest. First, Werner Herzog's latest Lo and Behold: Reveries of the Connected World (2015) is a worthwhile condensed feature version of a broader television series exploring the role of the internet and technology in shaping our past, our current moment, and our compromised future. From the first electronic message sent from UCLA to the Stanford Research Institute in October 1969, to ripped-from-the-headlines concerns over cyber-terrorism, Herzog weighs the pros and cons of the addictive practices inspired by technology's allure. The gadgets in our hands are one step away from robots with artificial intelligence that will end up learning faster and being smarter than humans can ever hope. Most amusing is his editorial choice to linger a few beats past each talking head's participation, revealing awkward countenances and moments of insecure reflection. 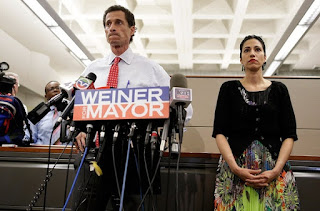 Secondly, the unbridled prurience of the American public with the sex lives of politicians rather than with their record of service bubbles up and boils over in the highly-publicized rise and fall of firebrand Anthony Weiner whose congressional career earlier capsized under the weight of a "sexting" scandal. Fortunate enough to receive his constituency's forgiveness for that indiscretion, Weiner confidently stages a comeback in a bid for mayor. Winner of the U.S. documentary Grand Jury Prize at Sundance, Josh Kriegman and Elyse Steinberg's Weiner (2016) adopts fly-on-the-wall coverage of Weiner's campaign trail, which kicks off promisingly and then begins to crash and burn as more sexting is revealed. You almost feel sorry for the guy, gauging the bad behavior of his past indiscretions against the ruthless hunger of the press for scandal, the late night talk shows' opportunities for ridicule, and the disgrace of being stalked by his online conquests seeking public confrontation! Remind me never to run for public office.
Posted by Michael Guillen at 5/06/2016 11:54:00 PM