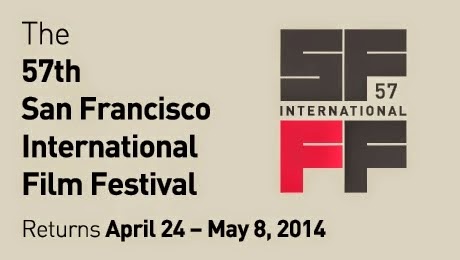 The 57th edition of the San Francisco International Film Festival (SFIFF) kicked into its second week with "An Evening With Richard Linklater." Head programmer Rachel Rosen awarded Linklater the San Francisco Film Society's Founder's Directing Award, followed by a sweet, if somewhat rambling, conversation between Linklater and Parker Posey (that felt in itself like I was watching a Robert Altman film), then a celebratory screening of Boyhood (2014), finished off by a Q&A with Linklater, his actress / daughter Lorelei (who nicknamed the film Twelve Years A Slave), and producer Cathleen Sutherland. 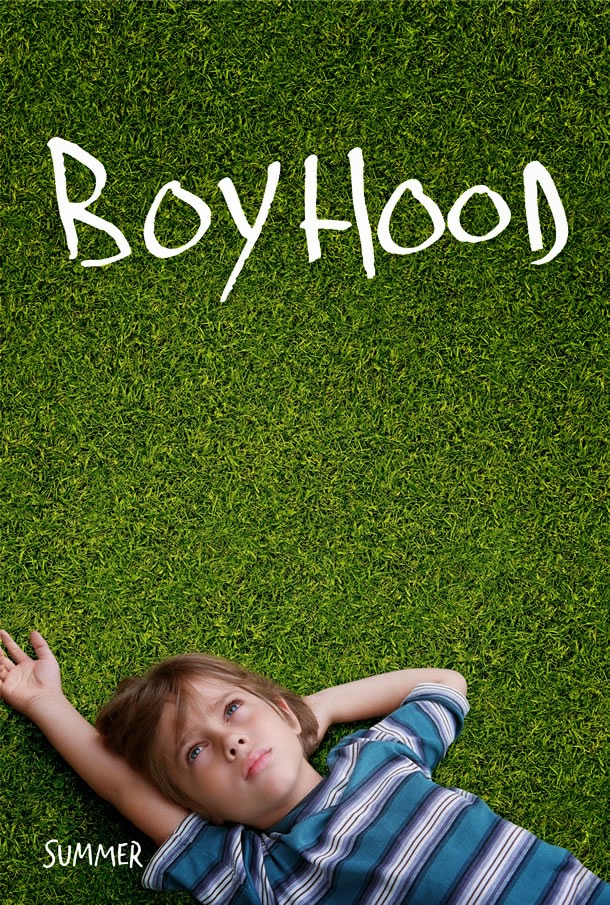 Richard Linklater has long exhibited an incredible grasp of the elasticity of time through his narrative trilogy and character study Before Sunrise (1995), Before Sunset (2004), and Before Midnight (2013), let alone his rotoscoped ruminations on same in Waking Life (2001) and A Scanner Darkly (2006), but his grasp of the theme of how lives are shaped by the passage of time—his sheer genius, I have to say—has reached a pitch of brilliance in his latest film Boyhood, which screened at the Castro Theatre to a capacity crowd that offered an effusive standing ovation begging for more (even after the film's life-spanning 162 minutes). This has been my favorite movie experience in recent memory and I can't wait to watch the film again as soon as possible.

I am outright stunned that Linklater had the creative foresight to imagine a film that would take 12 years to make (with all its attendant creative problems and solutions), chronicling the titular boyhood of Mason (in a career-defining performance by Ellar Coltrane), ranging from Mason's childhood inquiries into the existence of elves to a lovely mind-altered dalliance on his first day of college. Boyhood exudes the majesty of becoming oneself. 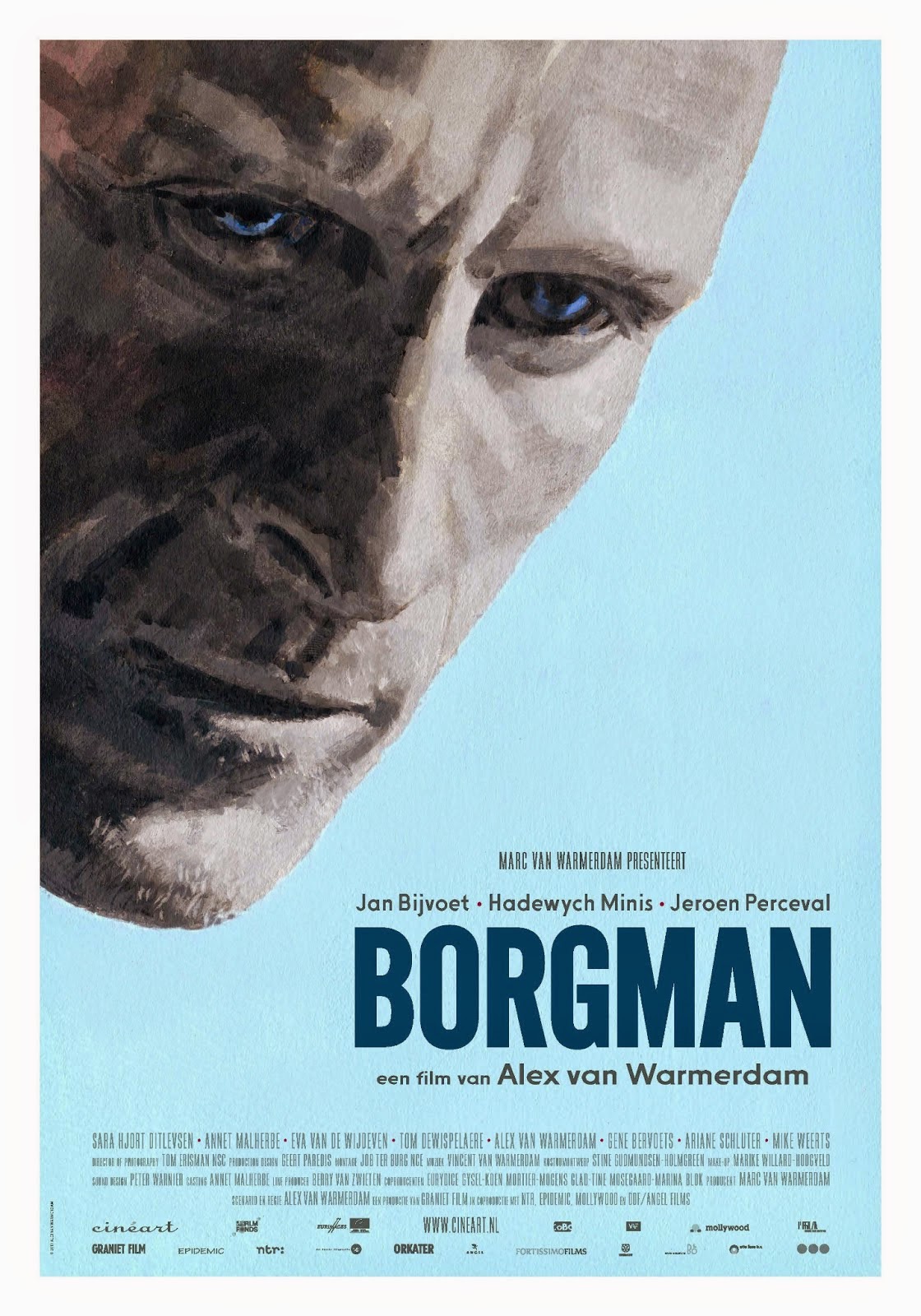 It's all questions and no answers in Alex van Warmerdam's befuddling yet enthralling Borgman (2013), representing the Netherlands at SFIFF. An adult fairy tale of sorts true to the dark underpinnings of pre-Disney fairy tales, Borgman entertains the most ancient of conceits: that of evil having to be invited over the threshhold. Once it's invited into the home of a well-heeled couple, preying upon their Christian charity, darkness unfolds in a series of chaotic master strokes involving lawn destruction, scalpels, and nightmares of spousal abuse. A headscratcher that festers in the mind.

Three years later, Steve Coogan and Rob Brydon continue the culinary adventure of The Trip with The Trip to Italy (2014), Michael Winterbottom's toast to fine wine, regional cuisine, stunning landscape and overbaked impersonations. At turns hilarious (particularly in the Pompeii sequence where Brydon is downright brilliant) and repetitive (how many DeNiro, Pacino and Brando impersonations can one stomach at one sitting?), A Trip to Italy achieves its goal: you'll want to rush out and enjoy a fine meal with a funny friend over a glass of wine. 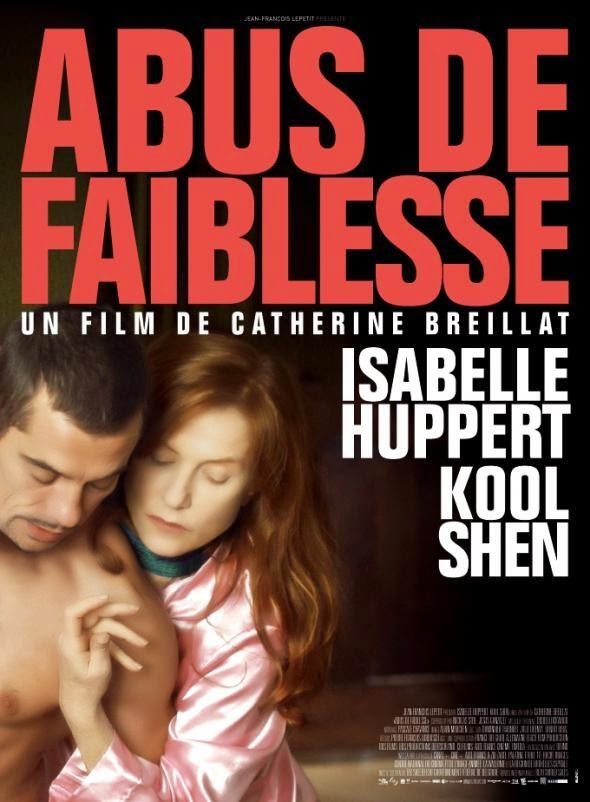 Earlier at SFIFF, I suffered through the S&M posturings of the near-intolerable Tip Top where one of my favorite actresses—the incandescent Isabelle Huppert—threw away her talent to humiliate herself on camera to meager ends. Under the guidance of Catherine Breillat, however, the power dynamics of a sadomasochistic relationship is explored in its full, fascinating, and much more credible complexity in Breillat's Abuse of Weakness (2013). With autobiographical flourish, Huppert stands in for Breillat who was stricken by a stroke and fleeced by a virile con-man while at her weakest. I was reminded of a passage in the diaries of Anaïs Nin where she observed a thuggish, near animalistic man, with unbridled desire. Questioning herself, Nin realized that what attracted her was the man's natural savagery in contrast to her own mannered civility. Extortion is rarely so erotic. 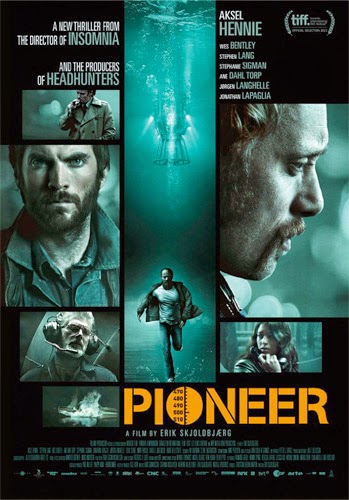 I'm a great fan of Scandinavian thrillers so there was no way I was going to miss Erik Skjoldbjaerg's Pioneer (2013). I was not disappointed. In Pioneer, Norway stands to benefit from building the first oil pipeline into the Black Sea. They join forces with the United States to do a feasibility study on men laying the pipe at such depths. During preliminary tests, tragedy strikes and a shady and violent cover-up begins. Genre at its best: concise, tense, and suspenseful.

I had read a lot about Lois Patiño's Coast of Death before walking in to see it so I felt ready to appreciate its form and style, but I didn't realize I was going to enjoy it so much. As spectator, I became the village eavesdropper, listening in on the lilting conversations of my neighbors, wandering the Galician coastside, remembering, gossiping. Only very old men can be concerned about the line between legend and history and only very young ones can crouch under pounding waves. A beautiful film, both near and far, distant and close. 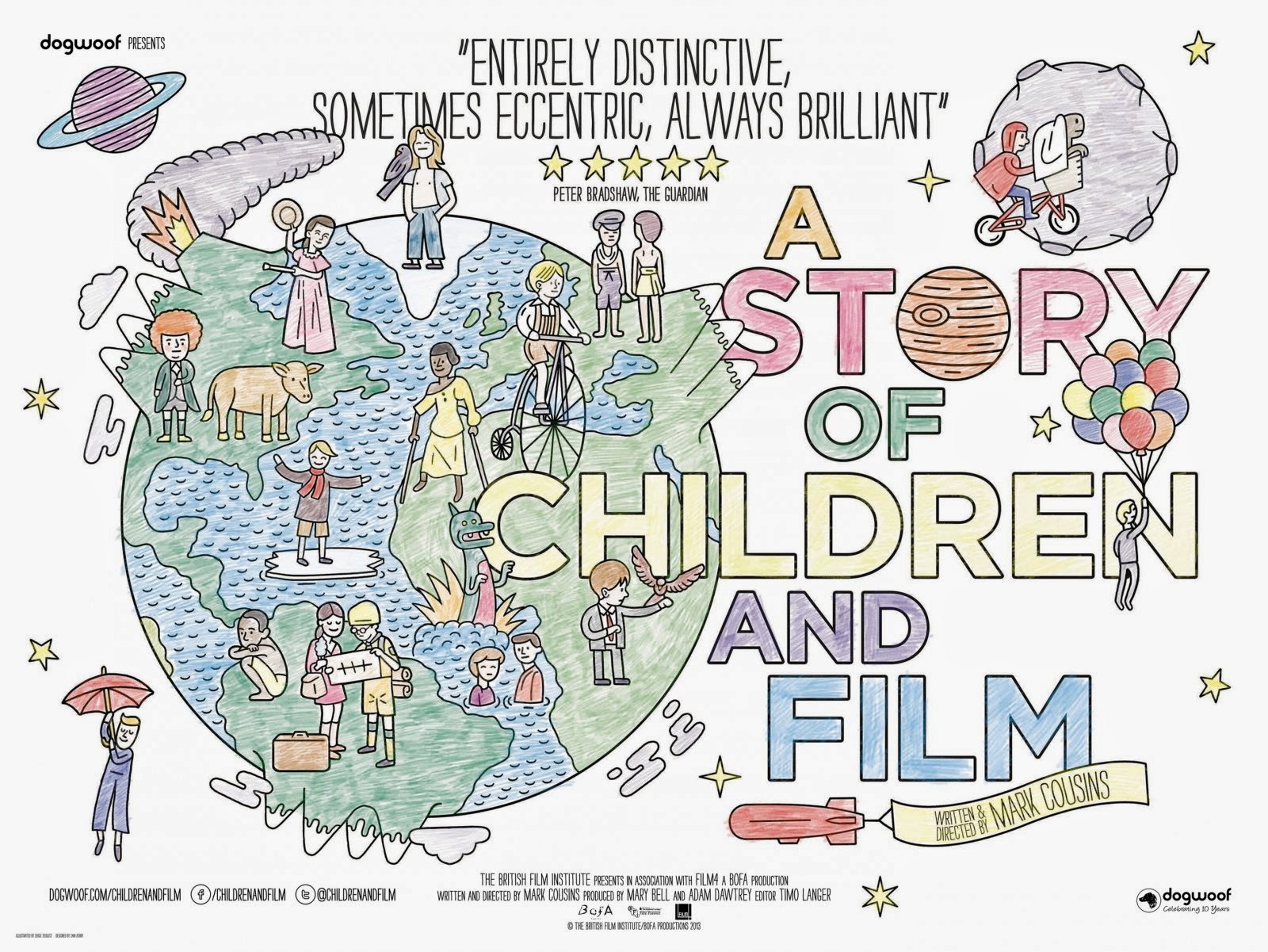 Having just lost my sister Barbara, watching Mark Cousins' A Story of Children & Film was difficult but offered the carthartic insight that sometimes a child is not really a child, but a child-parent, either watching after a younger sibling, or parenting their own mother or father. That was a soothing insight to take away from this film, along with Mark's unerring eye for cinematic themes and throughlines presented in rarely-seen clips from global filmmakers, making me hungry all over again (as after A Story of Film) to hunt out and pursue his recommendations. 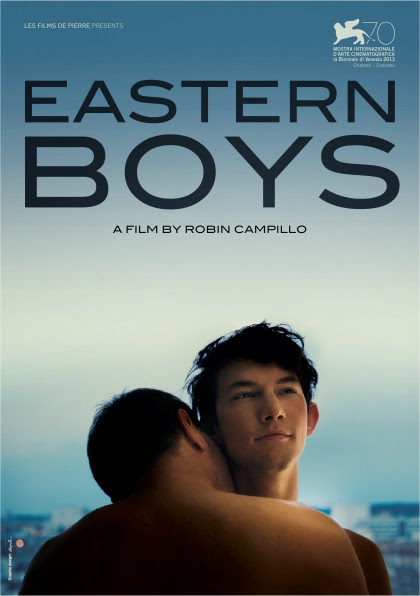 Programmer Sean Uyehara quipped that homoerotic thrillers are everyone's favorite genre right now, and Robin Campillo's Eastern Boys (2013) tracks right in. At first you think it's going to be just about the danger of compulsive desire, as in Alain Guiraudie's Stranger By the Lake, but then it opens out into a much more intriguing narrative about immigration and assimilation, provocatively suggesting that having a Daddy sometimes awards certain rights of citizenry, at least in this French erotic fantasy of sorts that hits all its intense marks and fully entertains. One of my festival favorites, with its not-to-be-missed homo home invasion scene. 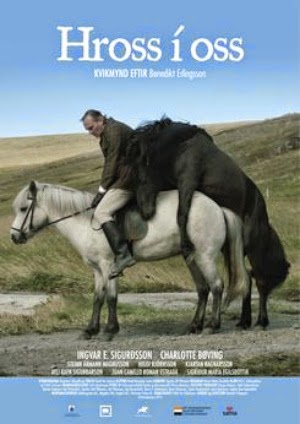 The true translation of Benedikt Erlingsson's Hross í oss would be Horse In Us rather than the circulating title Of Horses and Men (2013), which interests primarily for distinguishing the film's focus on the equine nature within human nature, specifically mating habits, inferring how complicated civility and protocol are when set against the far simpler honesty of stud mounting mare. Icelandic humor is peculiar to its culture and landscape, but reads amusingly well in this ensemble of beautifully-shot vignettes sourced if not seen from the eyes of horses. I was reminded of the patient and compassionate witness of Balthazar in Bresson's film and of the ancient concept that a subject, as reflected in the eye of the pupil—whether horse or man or binocular lens—is always "the other."

It's a pleasure to be the first audience to see a world premiere. It's usually an audience composed of friends, family, crew and diehard fans, and so the enthusiasm is unique and heartfelt. Such was certainly the case with the SFIFF world premiere of Heaven Adores You (2014), Nickolas Rossi's documentary portrait of beloved Oregon singer / songwriter Elliott Smith. Admittedly unfamiliar with the work of Smith, I came to the film by way of association with two of the film's producers: Haroula Rose (who I had met at the Sun Valley Film Festival, two years running), and Marc Smolowitz (who I met back during IFCON days, via Wendy Braitman, and with whom I became reacquainted during the filming of A Day In San Francisco, with footage repurposed for a public service announcement to raise awareness about AIDS Survivors Syndrome). I was glad to support both of them and to learn more about this eloquent melancholic undone by fame. Intermingling archival footage and photographs with filmed interviews and never-released Smith material, the film gains particular traction alongside its straightforward biography by creating an evocative trilogy of city symphonies. Very much a valentine to Portland, Kevin Moyer's guidance is especially keen here, not only in his B-reel footage, but in his moody score for the film, resonant with the feel of Oregon's grey rain. New York and Los Angeles are likewise made palpable through abstracted compositions of city life, providing great connective tissue. 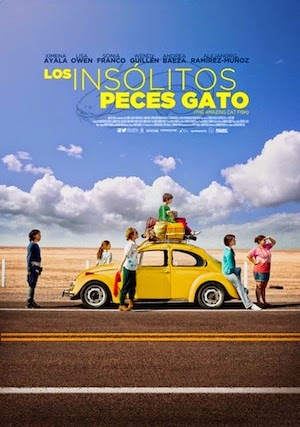 What defines the family is deftly expressed in Claudia Sainte-Luce's debut feature The Amazing Catfish (2013) where emotionally-bereft Claudia (Ximena Ayala) meets cute with a charmingly dysfunctional Mexican family who adopt her by necessity since the mother is dying of AIDS and all her children are acting out eccentric denials. The movie suggests that sometimes our truest families are not of blood but those of chosen companionship. This is not a new insight, but tenderly treated by Sainte-Luce, earning her an honorary mention from SFIFF's New Directors jury who described The Amazing Catfish as "a warm and exhilaratingly unpredictable dramedy from Mexican filmmaker Claudia Sainte-Luce about the impact of a mysterious stranger on a family struggling with imminent tragedy."

As Executive Producer, Spike Lee has clearly mentored Josef Wladyka's debut feature Manos Sucias (2014). It's raw, realistic, action-packed—especially in the railcar chase—and all around immersive, allowing the viewer into a criminal world to witness human faces; in this case, two brothers who have no choice but to get their hands dirty. 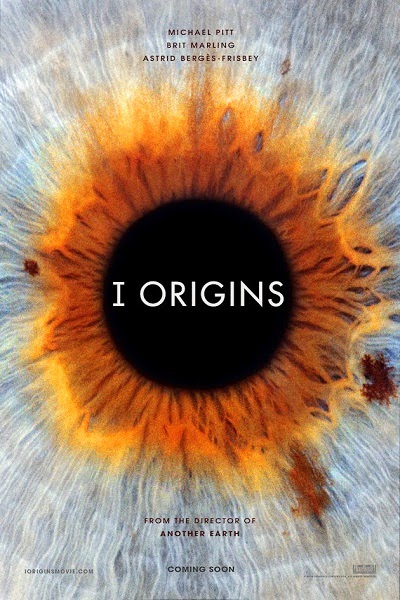 After a good dose of docs, foreign entries, and indie arthouse darlings, there comes a point in any film festival where I will easily give it up for fantasy genre. Rather fond of Mike Cahill's Another Earth (2011), I was pleased when SFIFF announced a last minute addition of Cahill's latest I Origins (2014) to the line-up. Amused by its offhand references to Boise, Idaho (Dan's Diner is going to get so many hits in coming months), I recognized the airport but little else of everyone's favorite City of Trees. I Origins uses iris identification (no two are alike, right?) to initiate a globetrotting quest. Well, I say "globetrotting" but it's really only between Boise, Idaho and India, since the two are clearly meant to be antipodes of reincarnation. Michael Pitt dukes it out for science all the way until the loosey goosies get him.
Posted by Michael Guillen at 5/14/2014 05:57:00 PM