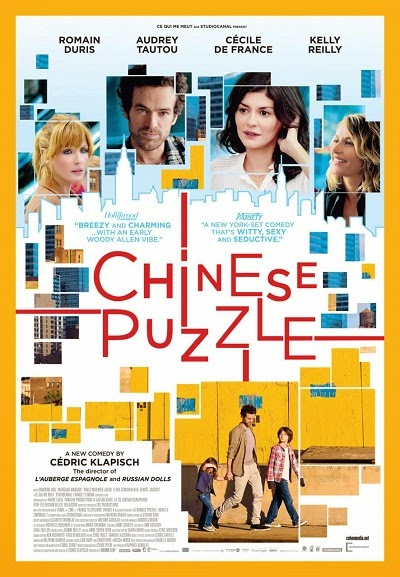 The 57th edition of the San Francisco International Film Festival provided a refreshing touch of international glamour with the on-stage appearance of beloved French actor Romain Duris, accompanied by director Cédric Klapisch, for the one-off screening of Chinese Puzzle (2013), the third installment in a trilogy that rivals Richard Linklater's "Before" Trilogy in its sophisticated purview of the maturation of cinematic characters over time. Ten years past, Klapisch delighted audiences with L'Auberge Espagnole (2002), introducing the charismatically frenetic Xavier (Duris) whose expectations of life are endlessly complicated by unfolding circumstance. Complication, however, veers into a kind of beauty, as Klapisch shifts his characters to New York City and sets their changing lives against a constantly shifting backdrop of urban pandemonium. As someone deeply enamored with street art, I admired Klapisch's eschewal of ready architectural branding to explore the pedestrian and oft-overlooked street-level beauty of modern Manhattan. My question was about such.

Michael Guillén: I have to compliment you on the kinetic beauty of this film, the way you've captured the city, and the way you've captured your characters moving throughout the city. In all three films—L'Auberge Espagnole, Russian Dolls, and now Chinese Puzzle—you've exhibited a texture that's partly the inherent mobility of a location combined with the narrative mobility of your characters. Can you speak to how you chose your locations in New York to create the look you wanted for the city? I love how the city looks in this film!

Cédric Klapisch: The thing is, I went to film school when I was 23 years old and during those two years I learned how to make movies in New York. That taught me a lot about how to shoot in the city today. I stayed about seven months in New York before I started shooting Chinese Puzzle, to write the script, and to take a lot of pictures so that I could look at the new New York, which is very different from the New York I knew in the '80s. I felt a need to capture what was different and new.

I was living near Chinatown so I figured it was more important to shoot in that neighborhood because nobody really shoots there. I wanted to shoot real street life, and not something from a postcard. Also, because I'm French, I wanted to make sure my film didn't look "touristy." I wanted to see things from the inside; but, I kept in mind that I have a different eye than most people in America, probably because I'm French, I'm European, I see things differently. The thing I say about the ground of New York meaning more when you ride a bike? If you ride a bike in Paris and then ride a bike in New York, it's completely different.

During those seven months that I stayed in New York working on the story, I learned to trust my powers of observation. I realized that Xavier had to be like Manhattan and Manhattan had to look like Xavier, so—where he wants to have a life that's organized—New York wants to look organized but it's really a crazy city; it's not organized at all. Once I wrote the script and decided how I wanted to shoot it, it was things I observed during those seven months in New York that influenced what you saw. Another thing is that—since I shot in Paris and New York—when I did my photography in Paris, everything was grey, beige and white. In New York everything was colorful. You can see a red building, or a blue building, which is impossible in Paris. I conceived the look of the film on that. The first part in Paris was kind of depressing for the character and so I used the grey aspect of Paris in that way. Then when he moves to New York, something enthusiastic and colorful happens.

Chinese Puzzle opens Friday, May 23, 2014 at Landmark's Embarcadero Center Cinema in San Francisco, and Landmark's Shattuck Cinemas in Berkeley. The film's running time is 117 minutes and is rated R. In French and English; non-English portions are subtitled in English.
Posted by Michael Guillen at 5/17/2014 07:19:00 PM