We're mid-month into the centennial celebration of Burt Lancaster's birthday. At Turner Classic Movies (TCM), Wednesday nights have been devoted to Lancaster, inarguably one of Hollywood's most popular leading men. Robert Osborne has written a profile for TCM, as has Roger Fristoe. At Fandor's Keyframe Daily, David Hudson has detailed various retrospectives of Lancaster's films, which have—in effect—been celebrated all year long. The Film Society at Lincoln Center mounted their "Man of Steel" retrospective in May, the Harvard Film Archive showcased Lancaster's films from July through September, Eastman House continued the celebration into October, Cornell offered a tryptich in early November, and the Morelia International Film Festival (FICM) dedicated their "Imaginary Mexico" sidebar to Lancaster with 35mm screenings of Veracruz (1954), The Unforgiven (1960), and The Professionals (1966).

Steve Seid of Berkeley's Pacific Film Archive contributed an essay to FICM's catalog to accompany the "Imaginary Mexico" retrospective, and The Evening Class is grateful to Seid and FICM for granting permission to republish same for a North American audience.

Burt Lancaster can be a tough hombre, a tough hombre with a grin the size of Texas. And it's not just one grin, but multitudes, called into action to be wry, or welcoming, or devilishly threatening. Put that smirky smile on an actor trained as an acrobat and you have a pliable mug perched atop some great athleticism.

When first pinched for the pictures, Lancaster didn't have that signature smile. His mid-1940s debut roles in The Killers (1946) and Brute Force (1947) were too hang-tough even for a sneer, but in time his bravado emerged. By the early 1950s, that grin came flooding forth in the swashbuckler send-up, The Crimson Pirate (1952), showing off his physical daring, a characteristic he would trump in Trapeze (1956), that soaring tribute to the Big Top. Lancaster could be the unctuous dreamer of The Rainmaker (1956), his deluded smile more an ooze, or he could raze careers with a few caustic curls of the lip as J.J. Hunsecker, the newspaper columnist of Sweet Smell of Success (1957). Lancaster could be barely contained, reveling in roles like the handsome huckster of Elmer Gantry (1960), or a model of restraint, resigned to the reserve of that famed Birdman of Alcatraz (1962).

By the time his youthful acrobatics had waned, Lancaster had stretched his more mature manners as an actor, limber now in gesture not gymnastics. Who can forget the vertiginous emotions of Ned Merrill, the long-drowning suburbanite in The Swimmer (1968), the world-weary wisdom of McIntosh, the reluctant Indian scout of Ulzana's Raid (1972), or Lou, the aging mobster, hit by antique desires in Atlantic City (1980)?

With over seventy lead roles, Burt Lancaster nimbly inhabited just about every conceivable film genre, receiving recognition in the form of an Oscar® and three additional nominations, as well as a Lifetime Achievement Award from the Screen Actors Guild. Of his multitude of films, a half-dozen might constitute his Mexican sojourn, beginning with Vera Cruz in 1954 and ending with Valdez Is Coming (1971), where the-then 58 year–old actor plays a worn-out Mexican-American constable determined to exact justice for an innocent man's death. A pair of westerns, The Scalphunters (1968) and Lawman (1971), both produced in Durango, share the same stretch of broken earth, but only the former film conjures Mexico as an elusive safe haven for the fleeing bounty hunters. 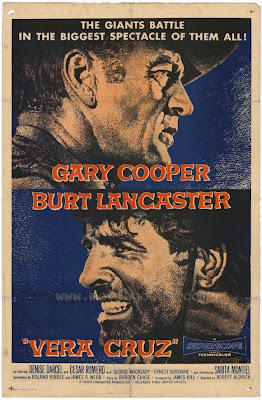 But the sojourn, indeed, begins with Robert Aldrich's energetic Vera Cruz, a hybrid western with dashes of ever-twisting intrigue. When Ben Trane (a stiff but stately Gary Cooper) moseys into town, a dusty way station in 1860s Mexico, his horse is lame from the hard track. We know at once times are tough for this former Confederate officer, now a mercenary looking for a cause with a credit line. He teams up with Joe Erin (Lancaster), a mayhem-mongering gunslinger with a chilling smile. Dragging along a gang of greasy desperadoes (Ernest Borgnine, Jack Elam, and Charles Bronson), they head for the Gulf Coast as the guardians of Emperor Maximillian's gold. Or so they think. Played for high mischief, Lancaster's amoral merc squeals with delight at the prospect of double-dealing and derring-do, a feral force amongst the tumbleweed.

Aldrich's second western, Vera Cruz was shot throughout the Valley of Mexico. One grand scene, an opulent gathering with the soon-to-be deposed Emperor, is staged at Max's Castle high atop the Chapultepec promontory. In another, the caravan carrying the Emperor's treasure passes close by Teotihuacan, suggesting in its stony grandeur that Mexico's true soul shall remain while the dalliances of the invaders shall pass. 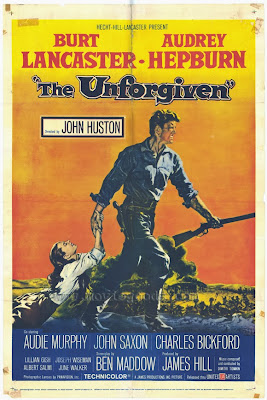 Director John Huston also knew the landscape of Mexico. His great The Treasure of the Sierra Madre (1948) was produced here—a decade later he returned to Durango to make The Unforgiven (1960), an eccentric tale about racial intolerance in the Texas panhandle. Written by Alan Le May whose earlier novel was the basis for The Searchers, this curiosity stars Burt Lancaster as Ben Zachary, the eldest son of a frontier family whose only daughter is an adopted Kiowa child played by Audrey Hepburn. When a stranger arrives declaring that she is "no Zachary," the community turns against this "red-skinned" foundling. An unusually restrained Lancaster plays the defender of his family's honor which riles even those within his own circle, especially his rancidly racist brother Cash, played by Audie Murphy. Eventually, the local Kiowa tribe try to buy pert Hepburn back, the denial of which escalates into an armed skirmish. If you look closely at the warring braves you might espy Emilio Fernández. Huston had hired Fernandez to supervise some of the action sequences, but it was rumored that "El Indio" would also play the part of a "bloodthirsty Kiowa." 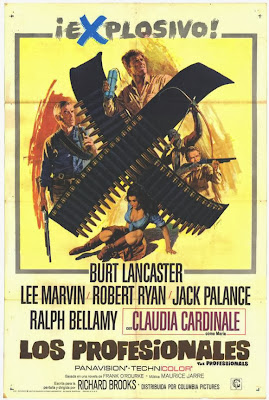 Across the border and into a heartless terrain of desert scrub and treacherous ravines ride the "professionals" as they close in on Raza's encampment. Raza, who notably speaks Spanish for half of his screen time, is the disillusioned revolutionary, now turning the chaos of war toward his own ends. "The Revolución is like a great love affair. In the beginning she is a goddess…. In time, we see her as she is," he says to Lancaster during a lethal stand-off.

And Lancaster's Bill, the demolition man? A short-fused adventurer, he turned an adolescent urge for artful creation into its explosive opposite. This was the perfect role for Burt Lancaster who himself possessed a barely containable inner energy that threatened detonation at any moment. His great actor's art was keeping that energy enclosed within the nuanced bounds of his body. Expect ignition.
Posted by Michael Guillen at 11/17/2013 06:59:00 AM