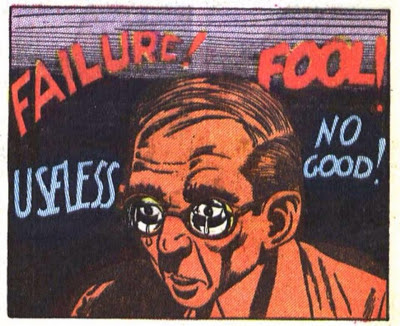 Elliot Lavine [interviews one and two] continues to entertain his San Franciscan audiences with noir oddities culled from studio vaults, private collections and Blu-rays, curatorially assembled into his 2013 edition of "I Wake Up Dreaming: 99 44/100% Noir", which continues its run through Thursday, May 23, 2013 at the Roxie. Dennis Harvey wrote up the series for The San Francisco Bay Guardian, as did Erin Blackwell for The Bay Area Reporter, Pam Grady for Cinezine Kane, Casey Burchby for The SF Weekly, and G. Allen Johnson for the San Francisco Chronicle.

Ever ahead of the curve when it comes to value added to the theatrical experience, Elliot invited Wayne Shellabarger to contribute a slide show of comic book panels to complement the series inbetween screenings and the effect has been stunning. I cornered Shellabarger in a dark alley near the Roxie where, unfortunately, the trash cans were only grey. 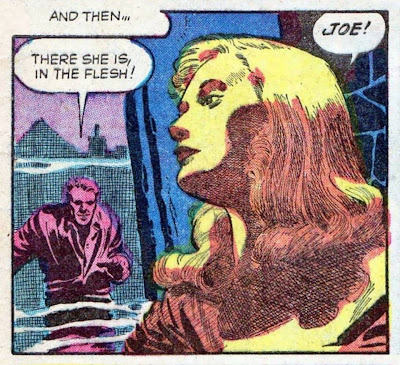 Michael Guillén: Wayne, how did you become interested in comic book panels as a slide show project to accompany Elliot Lavine's "I Wake Up Dreaming: 99 44/100% Noir" series for the Roxie Theater?

Wayne Shellabarger: I had access to a large digital archive of comics and—as I started reading through them—I discovered artists and stories that I had never heard of or read about or seen; most importantly seen reprinted or anthologized. The vibrancy, urgency and energy of certain panels gave me a buzz—whatever you want to call it—and struck me for some reason. I felt the visceral energy of these panels. They hit me. So I began to collect them through screencaps for my personal enjoyment and to look at again for later reference.

I built up quite a library of these and decided to review what I had captured by setting up a slide show to sit back and watch them. What I discovered was that—rather than looking at a series of panels—the slide show created a third form. It wasn't cinema, it wasn't comics, and it wasn't just a slide show. The way that the panels related to each other and were juxtaposed against each other in non-predictable ways created an interesting effect. Watching this slide show for the first time, I felt something new since seeing the panels as I had collected them. I thought, "This would be a really great thing to show before a movie." Especially before a film noir, because what I was collecting was mainly crime comics.

Guillén: In some respects, I consider your slide show project an installation piece.

Shellabarger: Whatever form this slide show has ended up taking at this festival is something I never intended. It unfolded organically and kind of happened as I kept working at it, looking at the panels more, adding to the slide show.

Guillén: Elliot Lavine is a comic book fan? He's been posting several comic book panels on his Facebook timeline. Is that your influence?

Shellabarger: Probably, yeah, though he posted a lot of cool comic book stuff before I started doing this.

Guillén: What caught my eye with your slide show project is that—although the appropriation and recontextualization of comic book panels is readily apparent in American culture through the paintings of Roy Lichtenstein—his project remains essentially a parody. What you're doing is more complementary or supplementary, especially with regard to partnering it with noir films, because you have culled out a collection of panels that are genre-specific. 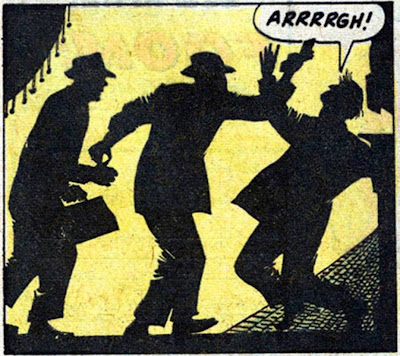 Shellabarger: I would like to avoid using words like "re-appropriate" or "recontextualize" because there was no brain work that went into this, no intellectual effort at all, the panels just hit me at a gut level.

Guillén: Well, I'd argue that gut reactions fall within the domain of emotional intelligence, which doesn't necessarily have anything to do with intellectuality, and is no less smart for it. As I watched your slide show at the festival, and monitored how well-received it was by your audience, it made me aware of the project's visceral aesthetics: the colors are primary; the frames are succinct, self-explanatory and complete in themselves. Your skill as the compiler of these frames is to single out, for wont of a better term, the focus through light (and darkness)—and, in your case, color—on the essential dramatic moment.

Shellabarger: Yeah! For every one I picked, I saw hundreds that didn't do it for me. It was not like there were gems lying everywhere, for me personally at least, and what I respond to might be different for someone else, but it seems like a lot of people are responding to the selfsame elements that I'm responding to.

Guillén: Do you come from an art history background? 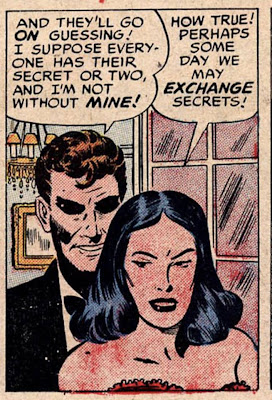 Shellabarger: Well, I've collected comics since I was a kid and then I did art history in college and I draw and illustrate and things like that. Once this slide show started to take shape, then it began to speak to me and dictated what it needed to build itself. Once I had in mind that it might be shown in this form, then it was easier to find a path—"This will work. This goes with this theme or that motif."—which I discovered as I was reviewing my collection. It's not that I'm imposing these themes or motifs. I'm receptive to what's already there.

Guillén: Which is where I would agree with you that this is not recontextualized art. If anything, it's punctuating or emphasizing what's intrinsic to the images.

Shellabarger: Or celebrating them. I'm not trying to make something different out of them.

Guillén: The simple genius of this project is the converging of two popular forms that focus on generic elements.

Shellabarger: One really nice surprise that I noticed was that—if these are noir panels (and I do think there's a hardcore noir sensibility to every single one of them)—they're at the same time the most garish, brightly-hued, and colorful comics, much more so than the comics I grew up reading in the '70s and '80s. For example, there will be a guy walking down a deserted alley and the trash cans will be a bright blue, bright green and bright red. The coloring works perfectly and doesn't take away from the dark attitude of the panel. It's very strange that it works.

Guillén: Even as a child reading comics, I became aware early on of the importance of inking and the individuals responsible for adding color to the stories. I noticed how sometimes the bleeding of color added to the effect, whether intended or not, and that quality especially stood out watching your panels projected onto a large screen.

You mentioned earlier that you were taken by panels unfamiliar to you. I was sitting in the theater with a fellow comics enthusiast and both of us couldn't recognize or source a single frame.

Shellabarger: Yeah, I thought that was another really attractive trait. What attracted me was that I was unfamiliar with a lot of these artists, probably because most of them are anonymous to this day in a lot of cases, except for people like Craig Yoe [official website].

Guillén: So these comics are from the '50s?

Shellabarger: Yeah, they're late '40s and then early '50s before the Comics Code. It seemed like it took the noir sensibility a little longer to inject itself in comics than in film. I noticed that it's in 1948 that it starts in comics more.

Guillén: So did the Comics Code prohibit these kinds of images? 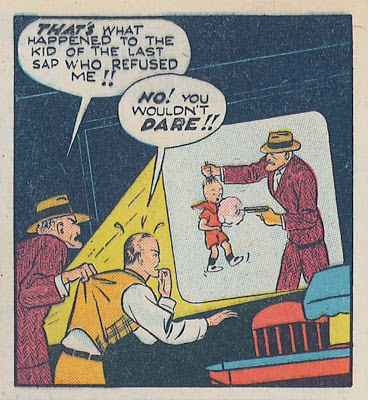 Shellabarger: Exactly. That's what it was designed to do. I mean, look at them! They're terribly harmful. [Laughs.]

Guillén: But then if you look at contemporary comics they're filled with violence.

Shellabarger: Yeah, but it's senseless, not beautiful.

Guillén: So what you're offering in your slide show are significant pre-Code panels that mirror but don't actually time with pre-Code film?

Shellabarger: Right. The same phenomenon happened in comics as happened in film but some 20+ years later.

Guillén: Other than by way of this slide show at the festival, do you intend to further this project in any way?

Shellabarger: A friend of mine compelled me to gather some of the panels together that he'd seen me post to accompany a musical performance that he was doing and that's when I started to gather them with the idea in mind of presenting them publically, rather than just for my personal use. So that's made me aware that I can build different programs to accompany different events, be they music or film. So there might be more slide shows coming. I've also collected a lot of romance panels, and monster panels, and surrealistic panels. 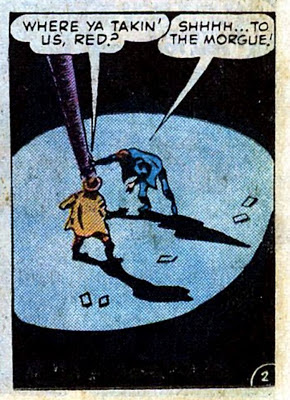 Guillén: About how many images did you use for this slide show?

Shellabarger: Just under 500, about 450, in constant rotation. The randomness of it helps underscore its effect.

Guillén: We're saying "slide show", but are these actually slides?

Shellabarger: No, they're jpegs and they're intended to run in a completely random order. Whatever juxtapositions and connections people make between the panels is what's most interesting about the project. The randomness allows new juxtapositions and connections to be constantly made and I find that stimulating, and—combined with the soundtrack underneath them to glue the images together—I'm surprised how well it works.

Guillén: Did you compile the soundtrack as well?

Shellabarger: I actually got a couple of my buddies—Tom Lynch and Jeremy Wheat, who are as much into music as I am into comics and who share my sensibility on a lot of things—to create the soundtrack. They hooked in to what I was wanting to do and they came up with these great mixes of '40s-'50s jazz and TV crime soundtracks.

Guillén: Thanks, Wayne, for taking the time to talk with me.

Shellabarger: Thanks to Elliot Lavine for creating a forum for this project!
Posted by Michael Guillen at 5/20/2013 01:13:00 PM