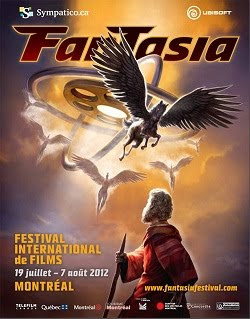 In catch-up mode, I revisit my experience of this summer's Fantasia International Film Festival. Unfortunately belated, I'm trusting that these comments will nonetheless encourage the trajectory of several Fantasia premieres as they negotiate the festival circuit in the coming year. Fantasia first; next stop: the world!

Fantasia has 16 candles on its birthday cake; but, rather than being blown out, the candles have caught the cake on fire and everyone gets a blazing slice. Say what you will about these mewing hordes, but Montreal might possibly boast the most appreciative audiences in the world, perhaps because—as was suggested to me—the city's so uptight and Fantasia is everyone's chance to let off steam? Such a pleasure to be seated in the Théâtre Hall Concordia watching packs of buffed up fan boys, girls wearing hardly anything but hectic ink, clowns and glee maidens, nerdy geeks and hornrimmed girls who prefer their boys genre-obsessed. It's a birthday party that has seized the university district, made all the more enjoyable into the wee hours of the night and the weary hours of the morning by luxurious spring-like weather! 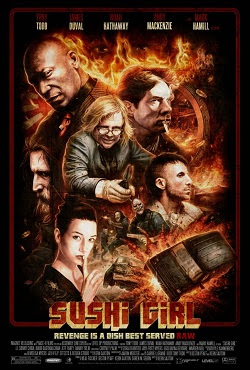 The ensemble cast assembled on-stage for the international premiere of Kern Saxton's Sushi Girl [official site] was a fan boy's wet dream: Tony Todd, Michael Biehn, Mark Hamill, Noah Hathaway, James Duval, Andy Mackenzie and—within the film—Sonny Chiba, Jeff Fahey and Danny Trejo. So with so much testosterone at hand, why did the film come off so flaccid? I can't fault the performances, especially Mark Hamill's fascinatingly obsequious characterization as Crow; truly a remarkable comeback for Hamill and the main reason to watch this film. In the key jewel heist scene where Fahey, Biehn and Trejo make brief appearances, their combined cult status made for a note of brilliance that should have been the tenor of this entire production throughout, particularly with a cast this strong. I'm going to have to point a blaming finger at Saxton's derivative script. At Variety, Maggie Lee explains: "Writer-helmer Kern Saxton's genre ambitions are as naked as the titular Sushi Girl, as he rolls together heist thriller, torture porn and orientalist eroticism, but the pic's resemblance to Reservoir Dogs feels more like a ripoff than canny references." Further, she adds, Sushi Girl's "predictable ending and the characters' hazy backstories aren't powerful or original enough to support such stylish treatment."

At Entertainment Maven, Matt Hodgson likewise faults the script, considering it nearly parasitic that Saxton relies on "a sure-fire way to make an uninspired movie by having one of their central characters tied to [a] chair and tortured for about 30 minutes. Maybe it worked for some earlier filmmakers, but this has to be one of the most annoying clichés to permeate horror and crime films." Hodgson reduces Sushi Girl to "not much more than a wasted opportunity, an opportunity that most filmmakers won't get in their entire careers." At Horror 101 With Dr. AC, Aaron Christensen agrees that "the ultimate equation is less than the sum of its parts" whose subsequent result "is a well-produced film with lofty ambitions, full of sound and fury ... that ultimately feels like much ado about nothing." 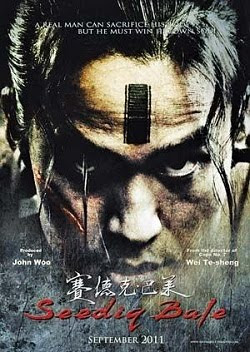 For its its Quebec premiere, Fantasia opted for the 4.5-hour version of Wei Te-Sheng's Taiwanese epic Warriors of the Rainbow: Seediq Bale [official site], rather than the abbreviated 2.5-hour theatrical version. I can't imagine this elegant narrative being trimmed down to half its size without losing coherence and—precisely because its full-length screening is such a rare event—I decided to catch it at Fantasia, who once again proves they know how to do everything right.

A magisterial and truly magnificent history lesson on the indigenous resistance of the Seediq people to Japanese occupation after the 1895 Treaty of Shimonoseki ceded Taiwan to the imperial Japanese, Warriors proved to be anthropologically thrilling for clearly discerning the shamanic substratum informing all pan-Pacific indigenous people, let alone the Seediq. The film could have as easily been redressing the plight of North American Amerindians, and quite specifically reminded me again and again of the Maya people during their own protracted Spanish occupation. The Seediq love and defense of the forest, their ancestral hunting grounds, and their ingenious use of familiar territory to pursue guerilla-type tactics (down to disturbing hornet nests to vex their Japanese opponents) reveals their brilliance as military strategists. How else could 300 tribesmen endure and ward off thousands of Japanese invaders over decades of occupation?

The film's intermission arrived on the heels of the infamous Wushe incident of 1930 when the Seediq—conceding that they have lost their hunting grounds—opt to defend the ancestral hunting grounds of their own souls through blood sacrifice in battle in hopes of achieving passage on the rainbow bridge of victorious manhood. Perhaps nothing new by way of an occupation and resistance narrative, Warriors nonetheless succeeds in surpassing audience expectation with lavish vistas, elegantly choreographed battle sequences that convert brutality into breathless beauty, and solid performances by an ensemble of Taiwan's best actors guided by Wei Te-Sheng, achieving one of the most cinematic events this reviewer has seen all year.

A perfect mix of high production values and heartfelt narrative, Warriors is a must for any moviegoer and is—trust me—amazingly effortless. Five hours sped by in spectatorial rapture. I'm so glad to have watched this one with colleague Kurt Halfyard, who shared my sentiments wholly. Warriors does have its faults, namely the heavy-handed use of rainbows as metaphors throughout the film; but, this is a minor complaint by contrast to the film's epic pleasures. 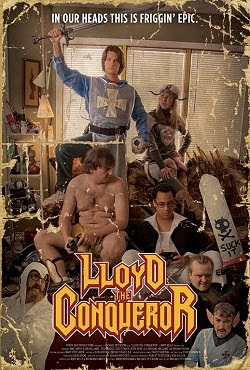 One of my favorite aspects of attending a festival like Fantasia—made conducive by the close proximity of its venues—is the chance choice triggered by a conversational recommendation. My thanks to Adam Lopez for introducing me to producer Brendan Hunter who charmed me with his synopsis of Lloyd the Conqueror [official site], thereby convincing me to turn right around from exiting Warriors of the Rainbow to enter the mythic and quite fun realm of the LARPer—the live action role player. Lloyd would not normally be my type of movie but—in talking with Brendan—I truly respected his insistence on making a film that was fun and audience-oriented rather than another narcissistic navel-gazer, which he complained dominates Canadian filmmaking.

I'm so glad I was part of the film's enthused audience who appreciated its sweet geeky ensemble: Evan Williams, as the conquering Lloyd, is a doll; Teagan Moss's Cassandra kicks ass; Mike Smith is the dastardly villain; and a hoary host of supporting turns makes Lloyd the Conqueror ridiculously entertaining. Rendered visually beautiful with its golden autumnal setting, Lloyd allowed a glimpse into a playfully competitive world I never knew existed. The battle between the forces of light and darkness has rarely been so enjoyable. Attended by a few LARPers in full regalia, I was advised that more had not attended because a weekend battle was raging in the hills outside Montreal! 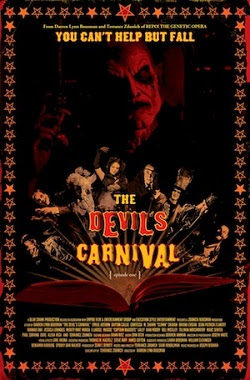 I attended the midnight event The Devil's Carnival [official site], which started out with carny acts: Satanic invocations, clown juggling, and snake wrangling by a voluptuous nearly-nude woman. These were followed by an advance peek at the first chapter of the film: a colorful, grand guignol dance of darkness, both discordant and beautiful. Particularly enjoyed the story of the scorpion and the frog.

Against a backdrop of grieving mourners, the McManus Brothers (Kevin and Matthew) launch their randy irreverent humor in Funeral Kings [official site], which saw its International Premiere at Fantasia. These foul-mouthed teens, thinly guised as altar boys, pilfer the communion wine, smoke cigarettes, and hunger to get to first base with girls way more mature than themselves. Funeral Kings' "wonderful vulgarity" (Scott Weinberg) shifts into poignance when the boys experience the grief of becoming young men sooner than they intend. Funeral Kings is a top-notch coming-of-age film with recognizable scenes of initiation for young men, reminiscent of Stand By Me. At Twitch, Kurt Halfyard posts both a review and his interview with the McManus Brothers. 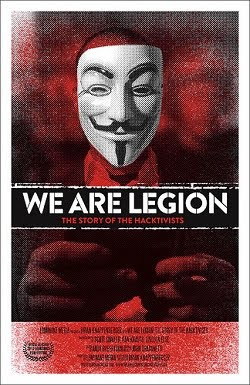 I've come to expect all sorts of genres at Fantasia—scifi, horror, thrillers, westerns, police procedurals, comedies of all stripes—but, really must praise the Fantasia programming team for including one of the most socially conscious and politically cogent documentaries I've seen in some time: the Quebec premiere of Brian Knappenberger's exemplary We Are Legion: The Story of the Hacktivists [official site]. I want this on Blu-Ray to watch again and again to remind myself of the Anonymous Movement and its impact on global philosophy and ethics, as well as to remind myself that our opinions as internet denizens and everyday citizens truly matter. At turns hilarious and inspiring, Knappenberger lays out the evolution of these now-legendary "hacktivists".

I was an easy convert to Pen-Ek Ratanaruang after 6ixtynin9 and Last Life in the Universe splashed on American shores as part of the new wave of Thai cinema; but, after Invisible Waves and Ploy, I decided soporific wasn't so terrific and gave up on the Thai auteur. Advance praise for Headshot, however, warmed me up to take one more look and I'm glad I did. An instant case of elevated genre if ever I've seen one, Ratanaruang retains his glacial rhythms and visually striking compositions but melds them with generic gangster tropes to create—not so much an action thriller, no, not at all—but, instead, an atmospheric nod to Thai neo-noir with a Buddhist riff about reincarnated identities within one lifetime. His audience is still arthouse but the touch of genre is refreshing and is keeping his fans awake. 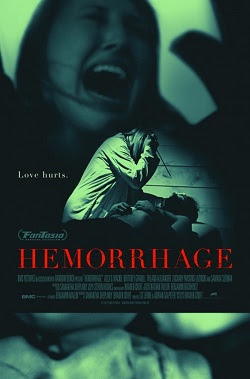 I thoroughly enjoy when colleagues collectively recommend a film, I follow their lead, watch the film, and like it. Case in point would be Fantasia's one-off Quebec premiere of Braden Croft's Hemorrhage, described in the Fantasia notes as "a serial killer thriller fusing a twisty road movie structure to an unsettling descent—or rather freefall—into the troubled mind of a murderer." Alex D. Mackie's lead turn is sympathetic and disturbing, sure, but the real star in this indie film is the original music by Steve Hughes combined with the sound work of Graham Smith and Jay Wiltzen. Suspenseful, tense, and alluring, it's been a while since I've heard a score be such an important presence—almost a character—in a film.

On the hunt for monsters among the fare offered at Fantasia, I treated myself to my first horror cocktail—a ghost with a twist—in Nicholas McCarthy's The Pact. I jumped once or twice during this more-than-adequate thriller that features Casper Van Dien in one of two appearances at the festival (the other in his capacity as producer for Starship Troopers: Invasion). 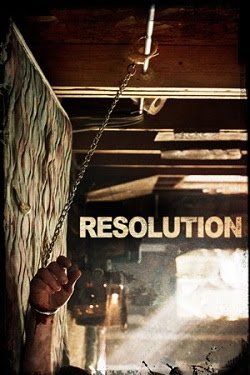 I didn't find Resolution nearly as horrifying as Mitch Davis promised it would be; but, I certainly found it entertaining for its natural dialogue and irreal alterities. Directors Justin Benson and Aaron Scott Moorhead are clearly having fun making up their careers (and movies) as they go along, which affords for some intriguing experimentation and a no-need-to-explain sensibility that's admittedly refreshing. I laughed more than I screamed; but, for all concerned, that was probably for the best. The "monster" is, perhaps, the context of the film itself, accounting for the directors admitting in their Q&A that part of the intended horror was for the audience to become aware by film's end that they have been sitting in the lap of the monster the entire film.
Posted by Michael Guillen at 9/25/2012 07:51:00 AM