My festival coverage has been necessarily hobbled this summer due to family medical emergencies, and unfortunately has resulted in my not being able to write up the sweet 16th edition of the Fantasia International Film Festival in as thorough and timely a manner as I had originally intended; but—in tribute to the crossover spirit of the festival circuit—what follows are responses to films I caught at Fantasia, which are now screening at the 2012 edition of Austin's Fantastic Fest, currently in progress. 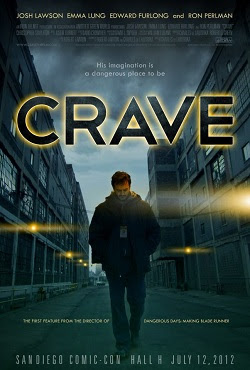 Charles de Lauzirika's Crave [Fantasia / Fantastic Fest] was, hands-down, my favorite film at Fantasia, as noted in my earlier Q&A transcript and interview with associate producer and digital effects supervisor Raleigh Stewart. My enthusiasm was confirmed by Crave winning Fantasia's New Flesh Award for Best First Feature Film. Crave's final Fantastic Fest screening on Wednesday, September 26, 2:15PM, is already sold-out, further underscoring my prediction that Crave is destined to be one of this year's most popular genre fantasies.

I will state the obvious (soon to become cliché, if not already so): Quentin Dupieux's Wrong [Fantasia / Fantastic Fest] does everything right and, thereby, elevates this absurdist narrative to the heights of a comic masterpiece. From the moment Dolph (Jack Plotnick) wakes up to an alarm clock that clicks from 7:59 to 7:60, you know you are in a universe where everything's off and ... well ... wrong. That his dog Paul is missing sets events further askew. Add quirky supporting turns from Alexis Dziena as Emma, the libidinous pizza delivery dispatcher, gardener Victor (Éric Judor) who ends up being planted in the earth himself, Master Chang (William Fichtner) who's an unnerving blend of Asian wisdom and Scandanavian weirdness, and Detective Ronnie (Steve Little) hired to find Paul but more the agent that propels Wrong's denouement into effect, Wrong provides so many unexpected laughs that its Canadian premiere surfaced as one of Fantasia's most delightful films, if not one of the year's best and certainly one to draw crowds at Fantastic Fest. Wrong has one more Fantastic Fest screening on Thursday, September 27, 2:30PM. 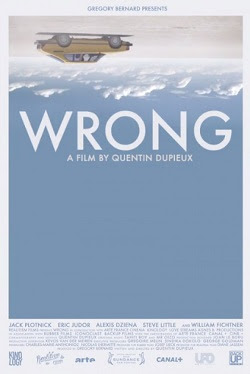 Wrong had its world premiere at Sundance 2012 where Director of Programming Trevor Groth noted: "Quentin Dupieux created a stir at the 2010 Cannes International Film Festival with Rubber, a film about a killer tire. He has crafted a follow-up that is equally bizarre, yet entrancing. Wrong overturns cinematic conventions and the universe within the film. Preconceived notions about life and storytelling are altered to a humorous, disorienting, yet ultimately illuminating effect. In doing so, Wrong makes us question those we blindly trust. With a hand in nearly every facet of filmmaking, Dupieux proves himself a mad, colossally talented visionary who delightfully refuses to play by the rules."

Anticipating Wrong at Sundance (where the film was nominated for the Grand Jury Prize), Eric Kohn noted at indieWire: "French director Quentin Dupieux—also known as the DJ artist Mr. Oizo—last caught the attention of the film world with the highest high concept to hit theaters last year with the outrageously meta 'killer tire movie' known as Rubber. Love it or hate it, Rubber was an utterly unique exploration of cinematic narrative, a riotous takedown of Hollywood formula and unapologetically amused with itself from start to finish. Now Dupieux has made a movie seemingly eager to state its edginess in title alone: Wrong ... apparently involves one man's quixotic journey to find his missing dog. Early buzz suggests that Dupieux really brought the crazy this time out, and the official synopsis makes it sound that the story really tracks the dissolution of its protagonist's sanity." Kohn then followed suit with his review. indieWire coverage. 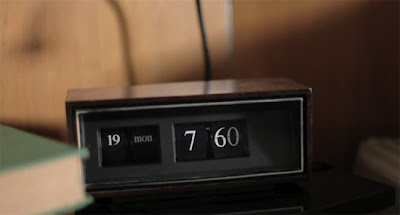 "From the start," Dennis Harvey writes at Variety, "Dupieux seems more delighted with the pic's forced quirkiness than most audiences will be." At The Hollywood Reporter, John Defore notes that lead actor Jack Plotnick's "unkempt persistence" and "a wry score by Tahiti Boy and Mr. Oizo (Oizo being the nom de musique of Dupieux himself) give the film just enough narrative momentum to carry it through short stretches in which cryptic plotlessness threatens to sink it."

Wrong's press kit (PDF) offers insightful interviews with both Director Quentin Dupieux and Producer Gregory Bernard. Further interviews with Dupieux are available at The Hollywood Reporter (which also offers a sneak peek of the film), Anthem, and The Film Stage. An alternate interview with Bernard is available at Screen International. Notable reviews from Fantasia include Jay Seaver at eFilmCritic who pegs Wrong as a "pure joyous oddity" and Kurt Halfyard at Twitch who claims Wrong "is likely as close as we will ever get to stand-up comedy in cinematic language." 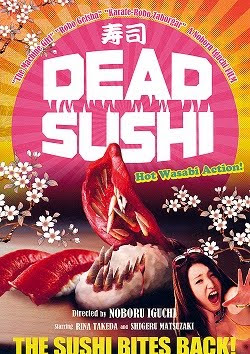 It seems appropriate that Kurt Halfyard and his wife LJ introduced me to a sushi bar caddy corner across the street from Montreal's Théâtre Hall Concordia before I submitted myself to the insane yet infectious vision of Noboru Iguchi. I might not have wanted same afterwards. The world premiere of Dead Sushi [Fantasia / Fantastic Fest] had its audiences shouting out "Danger!" each time a piece of sashimi shivered on the plate. Over-the-top isn't sufficient to describe this wacked-out feast of sight gags and absurd (and intentionally unbelievable) situations. Iguchi, introducing the film, was worth the price of admission. He seemed like an anime figure invited on-stage, waving like a schoolchild headed to camp. His lead actress Rina Tikeda got the Fantasia audience in the mood by high-kicking plastic bottles out of the hands of volunteers. Dead Sushi is a silly, silly film beloved by Iguchi's fanbase and—as noted by Jay Seaver at eFilmCritic—"caters to j-pop enthusiasts by delivering them exactly the sort of Japan they fetishize, only amplified. As Dead Sushi demonstrates, it doesn't always make for great movies, but it seldom results in boring ones." Dead Sushi has one more Fantastic Fest screening on Tuesday, September 25, 11:30PM. 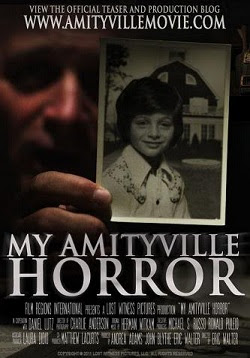 Eric Walter's documentary My Amityville Horror [Fantasia / Fantastic Fest] is thoroughly arresting and thought-provoking. As a craftsman, Walter's editorial wizardry is evident in how he has braided a handful of interviews with subject Daniel Lutz and his "agnostic" approach to events at the Amityville Horror House—rendered infamous by Jay Anson's book and its filmic adaptations—manages to shed light on the mystique of the Lutz family's experience of the house as well as creating new doubts to be debated throughout the next decade. That's investigative documentary filmmaking, folks! The Fantasia Q&A moderated by Tony Timpone was particularly rich and well-handled, enough to motivate me to introduce myself to Fangoria's former editor.

I set out to forget Valentín Javier Diment's La Memoria del Muerto [Fantasia / Fantastic Fest] as soon as possible, which wasn't too hard. By his own admission, Diment stole from Dario Argento's giallo excesses, but without the operatic coherence of Argento's work. With considerable more pretension, he claims to have stolen from Luis Buñuel's Exterminating Angel and Viridiana; but, all I witnessed was much shrieking and shouting. The kills were lurid, yes, but the blood unconvincing. In other words: being overwrought does not a good stylist make. I have to admit I did kind of like the menacing maniacal medicine cabinet.
Posted by Michael Guillen at 9/24/2012 11:43:00 AM