To paraphrase the Borg, resisting lists is futile. My resistance has whittled down to a rhythm. As the year draws to a close, first—to fulfill my commitment to the San Francisco Film Critics Circle (SFFCC)—I review all the films that achieved theatrical distribution during the course of the calendar year (since those are the only films the Circle is allowed to consider). This remains a frustrating enterprise because most of the films on that list are studio properties and are rarely the festival fare I tend to prefer. It's akin to "liking" political officials elected through corporate campaign funds. It's a very narrow choice and, perhaps, that's why it feels misleadingly passionate. As is well known, many fine foreign films never achieve U.S. distribution, though this year I'd have to say there were more accomplished documentaries than in years past. For those of you interested in what films achieved U.S. distribution, I refer you to Mike D'Angelo's ongoing tally.

Next, from that list of U.S.-distributed films, I nominate five films in ranked order in 12 basic categtories. This year that broke down as follows:

1. Jeong Hie-Yung (Poetry)
2. Tilda Swinton (We Need To Talk About Kevin)
3. Berenice Bejo (The Artist)
4. Sibell Kekilli (When We Leave)
5. Michelle Williams (My Week With Marilyn)

Needless to say, none of my first choices were granted honors at the Circle's final vote in early December. Ah well. Subjectivity can be a bitch. That final tally can be found at the SFFCC website.

As for my personal top 10, the list is not so divergent as in years past. Perhaps that reflects a tighter window between festival presence and theatrical distribution? Perhaps my tastes are becoming more homogenized? I can't really say; but, here are my top 10, in alphabetical order. 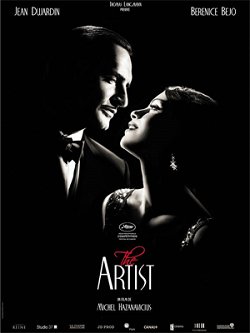 The Artist (Michel Hazavanicius). I first caught this film at its Special Presentation at the Toronto International Film Festival, fresh from Jean Dujardin's Best Actor win at Cannes. It was the only film I heard applauded by the international press during its festival P&I screening, which speaks to the film's undeniable appeal as entertainment. Within what parameters entertainment can be gauged as artistic achievement seems to have become the critical concern of late, however, as The Artist tussles with Terrence Malick's The Tree of Life for top position in year-end top 10 lists. Is a film that hits all its production marks and fulfills its creative intentions equally "artistic" as, let's say, a film like Tree of Life, which admittedly overreaches?

There are some who argue that The Artist is simply a pastiche, and that Hazavanicius is less an auteur than a proficient craftsman; but, I agree more with Michèle Maheux who argued in her TIFF program note that The Artist avoids "the trap of pastiche through a sincere appreciation of the cinematic possibilities offered by classic silent film." That's not saying it's trying to be a classic silent film, which some critics use to dismiss the film's artistic merit ("It's not as good as Murnau's Sunrise so, therefore, it's not any good"). Frankly, I find it silly to think The Artist is trying to be a classic silent film, even as it respectfully honors the conventions of the medium and resurrects them in a quite modern configuration. The Artist brilliantly reduces the running gag of Lina Lamont's grating speaking voice in Singing in the Rain, for example, to one transnational comic flourish at film's end when Jean Dujardin speaks in a thick French accent through a dashingly disarming grin. It's by the grace of the alphabet that The Artist is at the top of my list, but it would probably be there anyways. My interview with Michel Hazavanicius can be found here. 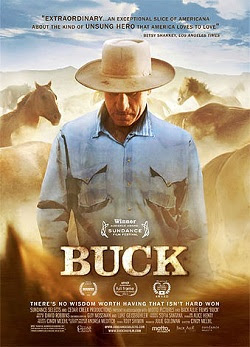 Buck (Cindy Meehl). This heartfelt documentary portrait of "horse whisperer" Buck Brannaman was the first film I caught after relocating to Boise, Idaho. It played at Boise's Flicks Theater as a benefit screening for the Idaho Buckaroo Project to an audience largely composed of buckaroos who had come into town with their families. This was a perfect way to view this film, which explores the ways in which childhood trauma is transformed into personal and professional triumph. My transcript of that benefit event and my interview with Andrea Scott from the Idaho Buckaroo Project can be found here. 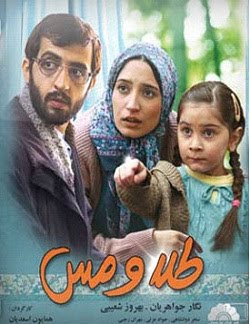 Gold & Copper / Tala Va Mes (Homayoun Asadian). This powerful Iranian domestic drama screened at the San Francisco International Asian American Film Festival. Seyed, a mullah-in-training, relies on his wife Zahra to run the household and earn income so that he can devote his time to studying the Koran. When Zahra becomes ill with multiple sclerosis, Seyed is forced to defeat his own expectations and to seek resources within himself to become a better husband and father. Through the lens of personal melodrama, Gold & Copper addresses the gender inequalities traditionally woven into Muslim society, ameliorating them with compassion. 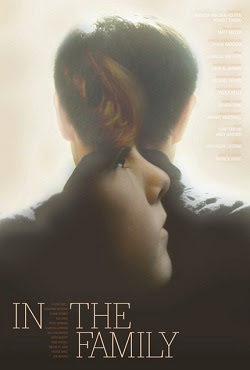 In the Family (Patrick Wang). In full disclosure, I have only seen this film on screener and am keen to watch it projected when its festival trajectory brings it to San Francisco next Spring. Wang centers his lead performance in a film he has both written and directed. What starts out as a deceptively gay narrative transforms into a deeply moving custody battle between a boy's blood family and his adoptive Asian American father. By taking the time to flesh out his narrative, Wang achieves masterful grace notes. My interview with Patrick Wang can be found here. 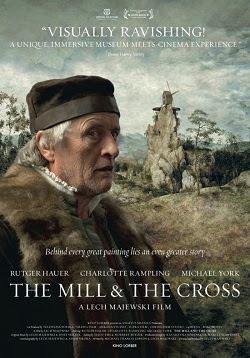 The Mill and the Cross (Lech Majewski). The SFFCC awarded The Mill and the Cross its special citation for "under-appreciated independent cinema" largely due to the championing efforts of Variety colleague Dennis Harvey. I backed him up 100% on this one. I've never quite seen a film like The Mill and the Cross. It takes you into the middle of Pieter Bruegel the Elder's 1564 painting "The Way to Calvary" and allows for a visceral experience of the painting's compositional infrastructure. This is a master work and my transcript of Majewski's introduction at the film's San Francisco International Film Festival screening can be found here. 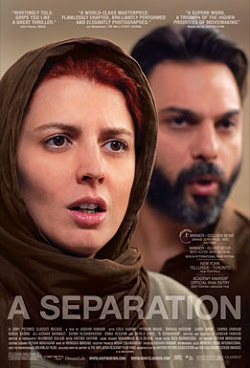 A Separation / Jodái-e Náder az Simin (Asghar Farhadi). That two Iranian family dramas have ended up on my top 10 list in the same year seems nearly remarkable in the face of government censure of Iranian filmmaking. Comparable to Gold & Copper in its deconstruction of gendered traditions, A Separation uses a dissipating marriage and the struggle for a daughter's custody to explore the exacting edge of justice in the face of shifting truth. Incredibly nuanced, I predict A Separation will be a leading contender in this year's Academy Awards® foreign language category. If it's not, then there is no justice. 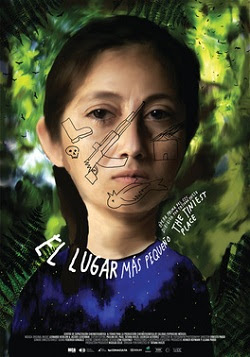 The Tiniest Place / El Lugar Más Pequeño (Tatiana Huezo). Another remarkable coup for the programming team of this year's San Francisco International Film Festival, Huezo's splendid documentary of the resuscitation of a Salvadorian village ravaged by war speaks to the strength of the human spirit to overcome horrific adversity. Perseverance heals. A transcript of my interview with Huezo is pending.

Tree of Life (Terrence Malick). As mentioned earlier, this film doesn't totally succeed; but, when it does—as in its nested narrative of a troubled family—it's as good as anything Malick has ever done, though arguably not his best. I'm a loud minority here (the SFFCC gave it three of its top awards) and add Tree of Life to my list with admitted reservations. Unfortunately, the grace of the alphabet doesn't help me in situating this film at the tail end of my 10. 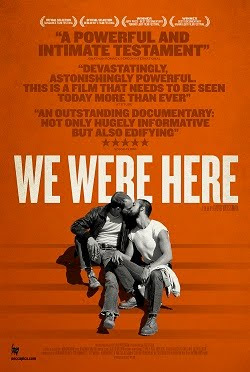 We Were Here (David Weismann & Bill Weber). As a long-time survivor of the HIV virus (I seroconverted in 1986), I can vouch for the fact that most people consider the AIDS crisis to be over. Nothing could be further from the truth. Weismann and Weber's look at the years when the Bay Area's heart burst into flames is given added poignancy for focusing on a handful of survivors from that tumultuous time. This film was extremely difficult for me to watch. It opened up wounds I thought had scarred over. The difference between now and then is that I have come to understand that the value of survivor's guilt is simply to remember and never forget. I'm grateful Weismann and Weber have never forgotten. I never will. My body's struggle to survive reveals memory as a perpetual activist.
Posted by Michael Guillen at 12/23/2011 05:04:00 PM

Great, and refreshingly different, list, Michael. I'm always on the lookout for personal Top 10s rather than polls, as it shows more personality and diversity, and more films I may not have heard of and need to track down. Unfortunately, even the high-profile critics are picking the same films. Oh well. I'm working on my own list myself. It was a good year for Filipino films and the task is a bit daunting,to say the least. :)

that was good to read - I loved Buck and A Separation and Melancholia. Many of the others I am still waiting to see. I enjoyed your writing on Melancholia which I just saw last night.

Hey Debbie, always so nice to hear from you. Thanks for stopping by to comment. I hope you and Charles are doing well. Happy Holidays!

Dodo: Thanks to you as well for stopping by to visit. I was just about to contact you regarding Loy Arcenas' Niño. Have you written it up by any chance? It's the only Philippine film showing at the Palm Springs International. Please let me know when you post your list.

A fabulous list Michael. Yours is one of the few lists that I look forward to every year. I am so happy to see Le Quattro Volte, A Separation, Drive and Nostalgia for the Light in your lists as these films will feature prominently in my end of the year tally. Uncle Boonmee... was in my last year's list. I am still waiting to see Mysteries of Lisbon but I think my DVD won't arrive next week which means I will finally get to see it only in 2012.

Wishing you a Happy New Year and more great film viewing in 2012 :)

Will do,Michael. As for Nino, yes, I've written a short piece on it: http://pelikula.blogspot.com/2011/11/nino.html

It's a genuine surprise, this. One of my favorites. :)

Michael: Finally catching up with your top ten after being away from home for the holidays. Interesting list, as always. I look forward to IN THE FAMILY sometime next year. WE WERE HERE was the most difficult time I had in a movie theater in 2011 - my shirt was soaking wet with tears as I stumbled out of the theater. Personally, I thought that WEEKEND was the most beautifully tender film about modern gay life ever made and the most touching romantic film (straight or gay) in years. I have obsessed over that film since seeing it for the first time in May (saw it four times this year!).