LISTS: FOR YOUR CONSIDERATION 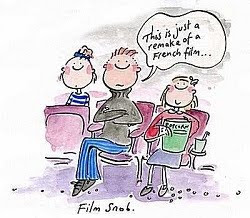 I have never been a film writer who holds much stock in ranking or rating movies, primarily because I suspect that any given experience of a movie is largely subjective, conditional and—if it is a movie worth its salt—ongoing. This is just one of the many similarities between movies and, let's say, dreams. When I say an "experience" of a movie, I'm emphasizing its organic capacity to impress upon the senses and to influence the psyche; i.e., to mean something, to bear emotional resonance and intellectual stimulation on an individual sensibility. In this sense an experience—and an experience of a film no less than any other—strikes me as being on the side of life, protean by nature, and resistant to being pinned down, categorized, or classified. There's also something illusory about an experience—especially a rich experience—that suggests to me that it's a mistake to perceive of an experience as a singular event. More to my mind's liking, an experience is simply a handful of water cupped from a flowing stream. It momentarily satisfies a thirst for understanding a larger momentum, much like writing thoughts and feelings into a diary or a journal provides the illusion that one's life is somehow being transcribed. I have already noted that my approach to experiencing and writing about films is guided by that diaristic—nearly epistolary, truly illusory—impulse.

But as individual an experience as watching a film can be, it is rarely done so in a vacuum. It is often, in fact, experienced with many others in a dark room watching flickering images projected onto a large screen. It is as much a communal experience as it is a personal one and often the shared experience colors the personal one. Even when one is watching a film alone on their home entertainment system, their personal experience is being colored by what they have perhaps read in magazines or been sold on television or heard from friends who have already seen the film. I have reached a stage where I question whether a movie can ever be a truly personal experience, even if insistently subjective. Not only may I dislike a movie that someone else likes very much, or be predisposed to appreciate a genre or a performance that someone else disfavors, or change my mind about a movie upon a second or third viewing so that I like it less or more; but, it now seems to me that so much of this subjective variability rests upon a disposition that favors film enthusiasm over film criticism and it strikes me that enthusiasm—by its very nature—will always have a sibling quarrel with the critically objective stance.

I have no issue with objectivity, per se, it's like any other sleight-of-hand, wholly reliant upon false hierarchies of ranking and rating (to a fault, I suspect) and enthused in its own way, distinguished by its obedience to the tension between the cinephilic and marketing impulses that chaperone most cinematic experiences today. It's almost certain to me that this tension is hardwired into the cinematic experience and that each cannot do without the other and that it's been this way since the beginning of cinema. The critics I most admire and who I enjoy reading, however, are those who struggle to communicate the shared experience, and less those predisposed towards consumer advocacy. The classic example would be Pauline Kael's defense of Bonnie and Clyde against Bosley Crowther. That is, for me, one of the most fascinating changing of the guards in the history of film criticism and a sterling reminder of how important it is to defend taste and choice as a cultural practice. Thus, I now identify the cultural practice of year-end listings not as any kind of objective guarantee, but simply one of the sports of civilization. I'm finally up for the game.

This year I was honored to be invited into the San Francisco Film Critics Circle (SFFCC). I accepted the invitation as a challenge, remembering with fond amusement when James Rocchi joined the Circle and admitted that he used to think he knew it all; but—after interacting with other members of the Circle—he now felt more like "a knuckle-dragging Neanderthal." I remember when he said that, I thought to myself: "How wonderful! I would love to feel that. To learn."

And so, this is all to say that I am learning how to make the list, and not only that but the shared list, which is—even as I write—being lobbied for through intense email volleys and an inundation of studio screeners as the members of SFFCC prepare for our upcoming annual vote. But how to structure such a shared list? I've been comfortable with lists structured from one-on-one interviews, with my favorite drawings of friends, with my favorite film festival experiences; but now I enter a domain where "For Your Consideration" is arched over the entrance no less menacingly than Dante's heed entering Hell.

My first true insight has been to demarcate the films eligible for such a list, which is (of course) all films which have achieved American theatrical distribution in 2010. All those wonderful films I've seen at film festivals that might have thrilled me to the marrow just don't count if they didn't achieve U.S. distribution. And isn't that a sobering insight after all? I offer below the list of all films (to the best of my knowledge) that achieved theatrical distribution in 2010, if not in the Bay Area, then definitely in New York. You will note an alarming absence of foreign films, which speaks volumes to American appetites and a failure of U.S. distribution models, and which leaves me scrambling to watch films I initially rejected at festivals in favor of narratives from the Global South. You will also note an alarming number of commercial dross, which—by default—makes my choices easier. My exercise will be threefold: first, this list of distributed titles; next, my choices for SFFCC; thirdly, the Circle's choices. May the games begin! All commentary welcome.

[Note: Bulleted titles are those which I have not seen.]

Daybreakers
Leap Year
• Youth in Revolt
• Bitch Slap
• Brutal Beauty: Tales of the Rose City Rollers
• Crazy on the Outside
• Sweetgrass
• Waiting for Armageddon
• Wonderful World
The Book of Eli
• The Spy Next Door
• 44 Inch Chest
• Chance Pe Dance
Fish Tank
The Last Station
• Extraordinary Measures
Legion
• Tooth Fairy
• Creation
• Drool
• The Girl on the Train
• Misconceptions
• Murder in Fashion
The Paranoids
• To Save a Life
• Veer
• Watercolors
• Edge of Darkness
• When in Rome
• Falling Awake
The Most Dangerous Man in America: Daniel Ellsberg and the Pentagon Papers
• North Face
• Off and Running
• Preacher's Kid
• Saint John of Las Vegas
• The Weathered Underground

Clash of the Titans
• The Last Song
• Tyler Perry’s Why Did I Get Married Too?
Breaking Upwards
• Breath Made Visible
• Don McKay
• The Greatest
The Sun Behind the Clouds: Tibet’s Struggle for Freedom
• The Thorn in the Heart
Warlords
• Date Night
• Letters to God
• 2012: Time for Change
• After.Life
• The Black Waters of Echo's Pond
• Everyone Else
• The Human Experience
La Missión
• Phyllis and Harold
The Square
• Valley of the Heart's Delight
• When You're Strange
• Death at a Funeral
Kick-Ass
• The Cartel
• The City of Your Final Destination
• Exit Through the Gift Shop
• Handsome Harry
• The Joneses
No One Knows About Persian Cats
• Nobody's Perfect
• The Perfect Game
The Secret in Their Eyes
• The Back-Up Plan
• The Losers
• Oceans
• Behind the Burly Q
• Best Worst Movie
• Boogie Woogie
• The Good, the Bad, the Weird
• In my Sleep
• Paper Man
• Furry Vengeance
A Nightmare on Elm Street
• The Good Heart
• Harry Brown
• Housefull
Human Centipede
• Mercy
• Please Give
• Touching Home
Anton Chekhov's The Duel

The Last Airbender
The Twilight Saga: Eclipse
• God of Vampires
• Great Directors
I Hate Luv Storys
• Luv Ranch
• Only When I Dance
• Despicable Me
Predators
All About Evil
• Around a Small Mountain
• The Girl Who Played with Fire
The Kids Are All Right
• Red Alert: The War Within
• Winnebago Man
[Rec] 2
Inception
• The Sorcerer's Apprentice
• Standing Ovation
Alamar
Henri-Georges Clouzot's Inferno
• Kisses
• Udaan
Valhalla Rising
• Ramona and Beezus
• Salt
• Countdown to Zero
• Jean-Michel Basquiat: The Radiant Child
• Khatta Meetha
Life During Wartime
• Mugabe and the White African
• Spoken Word
• Cats & Dogs: The Revenge of Kitty Galore
• Charlie St. Cloud
• Dinner for Schmucks
• 71 Into the Fire
• The Concert
• The Dry Land
• Enemies of the People
• The Extra Man
• Get Low
• Hugh Hefner: Playboy, Activist and Rebel
• Smash His Camera

The American
• Going the Distance
Machete
• Last Train Home
Mesrine: Public Enemy No. 1
My Dog Tulip
• We Are Family
• White Wedding
• The Winning Season
A Woman, A Gun and A Noodle Shop
Resident Evil: Afterlife
• Ahead of Time
• Bran Nue Dae
• Dabangg
• De Mai Tinh (Fool for Love)
• Genius Within: The Inner Life of Glenn Gould
Heartbreaker
• I'm Still Here
Le Refuge
• Legendary
• Logan
• Lovely, Still
• Midnight Reckoning
• The Romantics
• The Trial
• Who is Harry Nilsson?
• Alpha and Omega
• Devil
• Easy A
The Town
• Catfish
• El Superstar: The Unlikely Rise of Juan Frances
• The Freebie
• GasLand
• The Girl (Flickan)
• Jack Goes Boating
• Kings of Pastry
• Leaves of Grass
• Never Let Me Go
• On the Bowery
• The Other City
• Picture Me
• Sweethearts of the Prison Rodeo
• The Temptation of St. Tony
Legend of the Guardians: The Owls of Ga'Hoole
• The Virginity Hit
• Wall Street: Money Never Sleeps
• You Again
• Buried
Enter the Void
Howl
• Like Dandelion Dust
• A Mother’s Courage: Talking Back to Autism
• Waiting for “Superman”
• You Will Meet a Tall Dark Stranger

127 Hours
• Client 9: The Rise and Fall of Eliot Spitzer
• Due Date
• Fair Game
• For Colored Girls
• Four Lions
• Golmaal 3
• Guy and Madeline on a Park Bench
• Megamind
• Red Hill
• Violet Tendencies
• Morning Glory
• Cool It
• Every Man for Himself (2010 re-issue)
• Helena From the Wedding
• Skyline
• Tiny Furniture
• Unstoppable
• Guzaarish
Harry Potter and the Deathly Hallows Part 1
Heartless
• Made in Dagenham
The Next Three Days
White Material
• Break Ke Baad
• Burlesque
• Faster
• Love and Other Drugs
• The Nutcracker in 3D
• Tangled
The King's Speech

I wonder where that list comes from. If it's supposed to represent films that played for a week or more in a single theatre, there are certainly some missing titles. Four I thought of in the past few minutes alone which played in San Francisco for a week or more but do not appear on the list are It Came From Kuchar, Lourdes, Aftershock, and Lovers Of Hate.

I look forward to seeing how the rest of this processes unfolds for you!

Brian, as ever, I appreciate your kind support. Thanks! Am also grateful for your welcome additions to the list, which—though, perhaps, not definitive—I have to acknowledge as personally invaluable. It was put together by SFFCC member Peter Canavese who spent a gazillion hours of research, assisted by fellow member Omar Moore, to help the clueless like me gain their bearings on which films were theatrically distributed this year. I'm not exactly sure of their methodology; but, I think they used IMDb release dates to assemble the list.

Do you, by any chance, know the months your films played? Then I can add them to the list.

SFFCC member Kelly Vance has also just turned me on to The Numbers.

I believe It Came From Kuchar was released at the Roxie in April, Lovers of Hate at the same venue in June, and Lourdes, also at the Roxie, in August. Aftershock opened at the AMC 1000 in October.

Mike D'Angelo keeps a running list of all films that open for a minimum week-long engagement in New York City. link. Wonder how tough it would be for someone to maintain a similar list for Bay Area releases?

Brian, I'm sure it wouldn't be tough for you at all!! Heh. Thanks for D'Angelo's list. These resources will be invaluable come future tabulations.