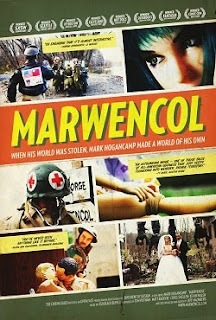 Marwencol is scheduled to open theatrically at Bay Area Landmark theaters on December 3, 2010 so I thought now would be a good time to revisit the review capsules by Frako Loden and Michael Hawley contributed to The Evening Class when Marwencol screened at the 53rd edition of the San Francisco International Film Festival. (A heads-up that Jeff Malmberg will appear in person to speak to his audiences at select shows; Friday December 3: both evening shows at Lumiere in San Francisco, Saturday, December 4: both evening shows at Shattuck in Berkeley, and Sunday, December 5: matinee showing at Lumiere in San Francisco.) 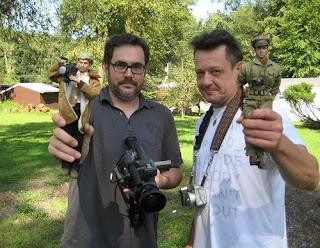 In the tradition of Jeff Feuerzeig's 2005 The Devil and Daniel Johnston and Jessica Yu's 2004 In the Realms of the Unreal, this documentary takes us into the very private fantasy world of an outsider artist whose work flourishes as a result of mental disturbance. The preceding 38 years of bad alcoholic Mark Hogancamp's memory was wiped out in a vicious 2000 barroom attack by five teenagers. Brain damage forced him to relearn how to eat, walk, read, write and remember his previous life. Miraculously, his desire for alcohol vanished. He was making progress when his therapy was cancelled due to inability to pay, and this is when he decided to "create my own therapies."

The solution was to construct outside his trailer a dollhouse-scale model of a World War II-era Belgian town he dubbed Marwencol, into which his action-figure soldier alter ego crash-lands. The brutal SS, who have already staged one massacre in the town, keep returning and demanding to know the whereabouts of a bar called The Ruined Stocking, where owner Mark now hangs out with his warrior buddies. A coterie of beautiful battle-hardened women survivors, played by Barbies, protect Mark and his friends from the SS. On Nazi-free evenings he pays the women to stage "cat fights" for entertainment. Life is one long party at The Ruined Stocking even if soldier Mark himself drinks nothing but coffee. 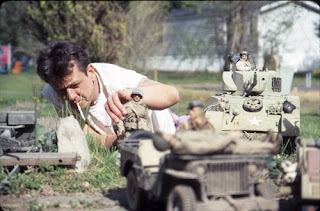 Mark the artist resembles Yu's subject Henry Darger, another very introverted artist who created details-rich universes full of combat, women's clothing and more than a whiff of fetish. Darger had his Vivian Girls and Mark has his 27 Barbies, individualized into glamorous avatars of real women in his life: his mother, his boss, his ex-neighbor. In his fantasy life, soldier Mark often gets kidnapped, tied up and tortured by the SS and is rescued in the nick of time by his fiercely protective women. Mark's photographs of his tableaux, peopled by dolls loving and battling in minutely detailed landscapes, are astonishingly realistic and more evocative than the movie stills they resemble. Think Todd Haynes' Superstar: The Karen Carpenter Story or the puppet animation of Kawamoto Kihachiro: Dolls come to life for us when they play out our fears and obsessions. And they tell us of our lives—they do what we're afraid to admit we want to do.

Over the course of the film we begin to learn, through the Marwencol enactments and then in the preparations for showing Mark's work at a Manhattan gallery, what was going on in Mark's life pre-assault—and what still haunts him. I feel guilty saying how funny I thought Mark's angst was over what to wear at his opening, since it was a hugely serious matter for him. But his term "fuckin' man-shoes" has entered my vocabulary for something you feel forced into wearing. I'm not sure I've seen another film that creates so much goodwill and admiration for a damaged man trying to put himself back together and then becoming an artist in the process. (Seen on DVD screener.) 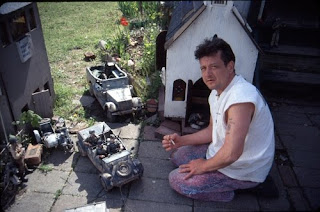 In 1993 [sic], Mark Hogencamp was viciously attacked outside a Kingston, NY bar and consequently spent nine days in a coma. His face had to be rebuilt and all his motor skills had to be relearned. Hogencamp's mental recovery from this trauma has been precipitated by Marwencol, a miniature, doll-populated WWII-era Belgian village he's built outside his trailer home. ...Hogencamp works through emotional issues by staging and photographing elaborate dramas with dolls, many of whom represent people he knows in "real" life. One day there might be staged catfights at "The Ruined Stocking" bar, and the next day might find Hogencamp's avatar doll being stripped and tortured by sadistic SS officers. Eventually the Art World comes calling—Hogencamp's photos are compiled into a nifty volume and a NYC gallery stages a one-man show. It's then we learn of a "twist" in his story; one that explains a lot about Marwencol and the "reason" for the 1993 attack. Director Malmberg lays all this out in a compelling way, using judicious stop-motion animation and period music to bring Hogencamp's extraordinary creation to life. 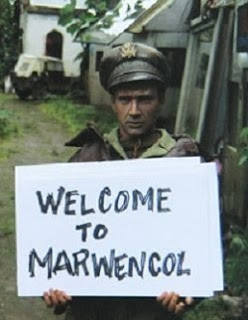 At All These Wonderful Things, A.J. Schnack has continued to monitor Marwencol, noting its recently-announced nomination for Outstanding Feature Film at the United Kingdom's Sheffield Doc / Fest; Malmberg's upcoming recipience of the International Documentary Association's Jacqueline Donnet Emerging Filmmaker Award; and Malmberg's intriguing decision to decline pursuit of an Oscar nomination due to "the cost of fulfilling the Academy's requirements." Marwencol has likewise won the Best Documentary Award at the 2010 Seattle International Film Festival, the 2010 Cleveland International Film Festival, and Comic-Con, as well as winning the Maverick Award for Best Documentary Feature at the 11th edition of the Woodstock Film Festival.

I finally watched Marwencol on screener the other night and join the chorus of those who find the intricacy of Mark Hogencamp's recovery a remarkable and unique viewing experience. Quite simply an amazing story of creative resiliency, Marwencol also offers a thoroughly unexpected twist that lifts its narrative events into a provocative—indeed, unsettling—stratosphere. To discuss this, I must forewarn: not for the spoiler-wary! 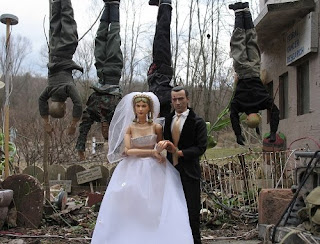 As inspiring as I found this document of Hogencamp's physical and psychospiritual recovery from a brutal bashing, I found myself necessarily concerned with the intrusive consequences of documentary filmmaking (for lack of a better term, the "death eye" of the camera lens). Marwencol's program note for IFC's "Stranger Than Fiction" documentary series touches upon my concern: "When Mark's stunningly realistic photos are discovered and published in an art magazine, his homemade therapy suddenly becomes 'art,' forcing Mark to make a choice between the safety of his fictional town and the real world he's avoided since his attack." His physical and psychological safety is what concerns me, even as I understand that this tension is part and parcel of the aesthetic that defines "outsider" art. At what point does self-consciousness introduce the irony whose absence initiated the art world's interest in Hogencamp's photographs in the first place? In other words, is a certain creative innocence—if not a certain therapeutic efficacy—lost when private practice enters the public arena? Consider it a compliment to Malmberg's film that he has generated sufficient identification with his subject, such that I have become concerned for Hogencamp's future well-being.

Marwencol insinuates that Hogencamp precipitated the attack on that fateful night in 2000 by drunkenly revealing in a bar that he was a cross-dresser fond of women's stockings and shoes. Anyone educated in transvestism will know that there is no immediate link to homosexuality—and, indeed, Hogencamp expresses his transvestism through a straight lens—but the attack on his person strikes me as an essentially homophobic act rooted in misogyny. For me this is the poignancy of Hogencamp's plight: the loneliness of a cross-dresser who desires women and the homophobic rage it raises in men (and perhaps even women) who will not tolerate any feminization of the masculine image. I would love to read a Jungian analyst's assessment of Hogencamp's podophilia—i.e., foot fetishism—as a study in grounding. Not only in how he must watch his feet while taking walks for fear of losing his balance, but in his efforts to come back to earth, back to a coordinated body, after his near brush with death. 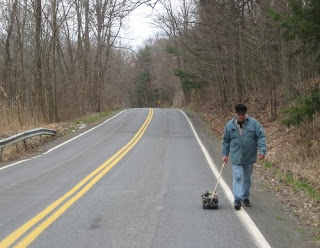 My psychological interests are also piqued by Hogencamp's embrace of scale. Not only has he created a world that is one sixth the size of "real" life populated by Barbies and action figures; but then—at film's end—he introduces a doll who serves as his alter-ego (dare I say altar-ego?) creating a world that is one-sixth the size of Marwencol! It's like a barbershop mirror of diminishing scale! By contrast, when he attends the art opening where his figural photographs are blown up larger-than-life, an eerie disquietude enters the equation. 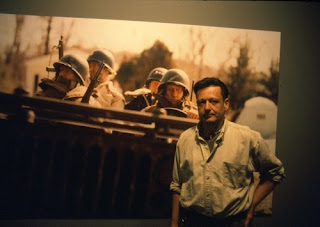 Finally, though Frako Loden honestly admitted her amusement with Hogencamp's angst over what to wear at the art opening, I instead felt a profound sadness at the limited facility of fantasy, especially when inflected as fetishism. As much as Hogencamp could pour his imagination into Marwencol to reconfigure himself as a human being with a individual identity questing to know itself; as much as he could entertain the gynandrous performance between masculinity and femininity by playing and acting out with his dolls; as much as dolls are—in essence—pupillas (the reflected self in the dark pupil of the other): these activities are intrapsychic compensations for what the interpersonal will not allow. When he arrives in Greenwich village for the art opening, eager to encounter other cross-dressers on the street, he finds instead the rather homogenized and commodified culture of contemporary queer life: everyday folks leading commonplace lives, having long ago adjusted their exaggerated self-images to compromised community. One wishes in a way that Hogencamp could have entered the queer flourescence of the '60s or '70s when genderfuck fashion would have welcomed him with open arms and proudly joined him for a stroll down Christopher or Castro Street in spike heels.

What a unique collection of dolls, I would love a chance to win one please. Dolls come to life for us when they play out our fears and obsessions.

Maya, I also wished that at his opening reception Mark would not feel restricted to wearing “fuckin’ man-shoes” and instead wore his spike heels or even more, greeted by a roomful of enthusiastic cross-dressers as his introduction to the Village art world. But at worst that’s a scene from a Hollywood movie and at best an anachronism, and I’m secretly relieved that that didn’t happen. After all, Hogencamp is an artist who’s worked far from that world since he began. The people who come to his openings, the people he meets in the streets, are not necessarily the people he’s been speaking to through his art. He’s been speaking to himself. I’m also concerned about what will happen with his art now that he has a following and a book. The changes of scale are one of those effects. I guess they’ll be the effects that exposure and fame will have on any artist.

Frako, thanks for swinging by to comment and--once again--for your festival capsule.

"Anachronism" is the perfect term to describe my good wishes for Hogencamp's introduction to the Village art world. It's with a certain chagrin that I concede that even I can never go back to the '60s and '70s. At best, I recall their spirit with much affection.

As for my concern about Hogencamp's future artistry, let alone well-being, perhaps I'm just being negative. I want to believe that this exposure has been as therapeutic for him as those he created for himself. It would be interesting to hear some follow-up. I certainly wish him the best.

Any word on if this is getting a decent size North American release?

Here's the Cinema Guild theatrical site, which lays out their intended rollout, CS. Hopefully Marwencol will be coming to a city near you. They'll also follow up on DVD.