As TCM synopsizes: "This new film presents Clint Eastwood both at his home and visiting film locations and sites where his movies were created, including the costume department and the Eastwood Scoring Stage on the Warner Bros. lot. Eastwood's candid, intelligent and often humorous interviews about his body of work and the choices he made, along with abundant clips from his movies, come together to form an up-close and personal portrait of one of the great movie icons. The end result is a clear reminder of why Eastwood's career as both a great filmmaker and actor has been so enduring." 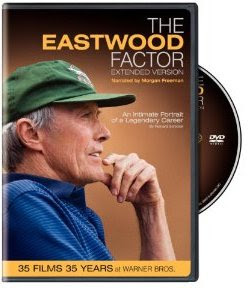 The Eastwood Factor was originally released by Warner Home Video (WHV) earlier this year as part of its Clint Eastwood: 35 Films, 35 Years at Warner Bros. giftset. TCM will present an extended version of the film, which will be released on home video June 1 in conjunction with the releases of Eastwood's latest film, Invictus (2009).

Also on June 1, WHV will release four new WHV Eastwood collections along with The Eastwood Factor Extended Version as a single DVD title for a suggested retail price of $14.97. The Eastwood collections include The Clint Eastwood Collection, a new Blu-ray box set featuring 10 films on Blu-ray; Essential Eastwood: Director's Collection, on both Blu-ray and DVD; Essential Eastwood: Action Collection; and an Eastwood Blu-ray Promotion, with Blu-ray double features. In addition, Clint Eastwood: 35 Films 35 Years at Warner Bros., the previously released 19-disc collection, will now include the feature-length The Eastwood Factor Extended Version.

I've had a chance to take a look at Schickel's new documentary and find it intriguing for diverging from his more usual practice of letting his subject interviewees speak for themselves without narrative voiceover (a practice we discussed in my interview with him some time back). Schickel has handed that honor over to Morgan Freeman, whose longstanding association with Eastwood recently culminated in Invictus, a project that Freeman brought to Eastwood's attention. Freeman's voiceover skillfully guides us towards an enhanced contextualization of Eastwood's body of work. 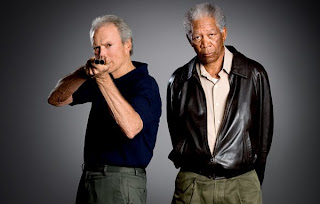 Of concern, however, is that The Eastwood Factor is clearly meant for existing Eastwood fans and not so much for those unfamiliar with his iconic work. In its thorough survey of the many films under Eastwood's belt—in which he has either starred and/or directed—the documentary is rife with spoilers and pretty much reveals the ending to each and every film it discusses. Though this provides some appropriate insights into films seen, it was not so much appreciated for films not yet seen. So a big fat spoiler alert needs to be given to anyone planning on catching the documentary's world premiere on Monday, May 31, first at 7:30PM and then at its encore screening at 1:15AM (PT). 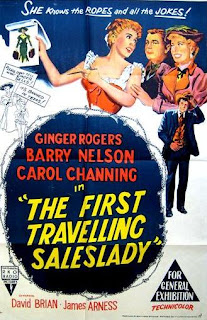 5:00AM—A Fistful of Dollars (1964). Co-starring Gian Maria Velonté and Marianne Koch. This atmospheric and exciting Sergio Leone spaghetti western is a remake of Akira Kurosawa's 1961 samurai film Yojimbo, with Eastwood taking the role played by Toshiro Mifune in the original. Eastwood's character comes into a town with two warring gangs, and he proceeds to play them against each other for his own gain. This film made Eastwood an international star and—thanks to Ennio Morricone's legendary score—changed the way westerns sounded for decades to come. 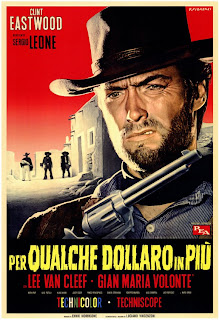 6:45AM—For a Few Dollars More (1965). Co-starring Lee Van Cleef and Gian Maria Velonté. Eastwood is back as the nameless gunslinger in this sequel, which finds the character forming an uneasy partnership in order to track down an outlaw. A scene in which Lee Van Cleef strikes a match on the neck of Klaus Kinski is particularly memorable.

9:00AM—The Good, The Bad and the Ugly (1966). Co-starring Lee Van Cleef and Eli Wallach. Sergio Leone's third film in the Dollars trilogy features Eastwood, Van Cleef and Eli Wallach as three gunmen hunting for a Confederate government treasure chest. After the film's tremendous success, composer Ennio Morricone's theme is now a pop culture icon. A reminder that I transcribed Robert Osborne's on stage conversation with Eli Wallach when The Good, The Bad and the Ugly screened at the first-ever TCM Classic Film Festival. 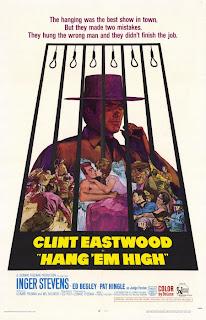 Noon—Hang 'Em High (1968). Co-starring Inger Stevens, Ed Begley, Ben Johnson, Bruce Dern and Pat Hingle. Continuing the success he enjoyed with spaghetti westerns, Eastwood starred in this American take on the sub-genre. He plays a hanged man who survives and goes on the hunt for the men who strung him up. 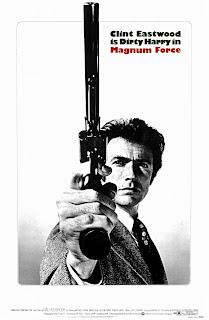 11:00PM—Magnum Force (1973). Co-starring Hal Holbrook, Mitchell Ryan and David Soul. In this, the first of several sequels to Dirty Harry, Eastwood is back as Callahan, this time involved in an investigation that may lead right back to the police department. This macho thriller was written by John Milius and Michael Cimino. TCM premiere.