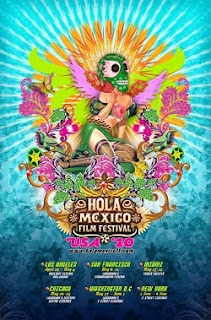 In recent years Mexican cinema has had a tough row to hoe in the Bay Area. First, Cine Accion went anemic and died a slow, ignoble death. Then the International Latino Film Festival (ILFF) stepped in (only to overextend itself into oblivion). As Michael Hawley reported at film-415, a dedicated and committed group of left over volunteers from ILFF organized last November's brief run of the San Francisco Latino Film Festival and hopes are that they will return again this year come September. But other than for the random DVD projection at Galeria de la Raza or the Mission Cultural Center, Mexican cinema has had to content itself with its token Bay Area festival appearances, most recently the San Francisco International Film Festival (SFIFF), which screened three films from Mexico in their 53rd edition: Presumed Guilty, Alamar and Northless. That's a respectable sampling given the fact that Mexican cinema competes for those SFIFF slots with the national cinemas of other Latin American countries (Argentina, Brazil, Chile, Colombia, and Cuba at this year's edition alone).

Picking up the slack where our local festivals have not is the Hola Mexico Film Festival (HMFF), which—in its second year touring the U.S.—has included San Francisco among its roster of cities. And just in time, as 2010 brings about a monumental occasion for Mexico: the centennial of the Mexican Revolution and the bicentennial of the Independence movement.

Founded in 2006 by Samuel Douek with the express goal of exposing the international community to the creativity, ingenuity and charm of Mexican culture through film, Douek has organized a diverse but well-edited selection of films which allow viewers to experience the unique walks of life that characterize Mexican identity and culture and which exposes Mexican directors, producers and actors to the mainstream US market. At this stage, HMFF is the largest tribute to Mexican film in the world. 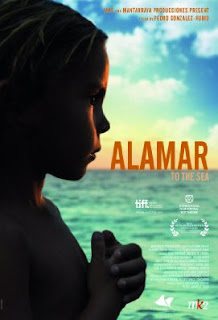 One of two entries in the current HMFF lineup that have just recently screened at SFIFF53, HMFF affords the opportunity to view González-Rubio's sophomore feature Alamar for those who missed it at the San Francisco International. I caught the film at its world premiere at the 2009 Toronto International Film Festival and wrote it up then. It's been picked up as Film Movement's July subscription film. 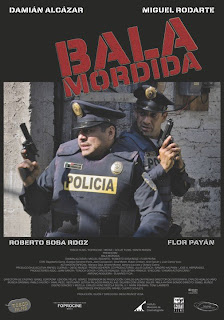 Mauro Hernandez is a young cop who believes he can make a difference. But when he gets caught in the middle of a drug deal that involves his commander, things start to fall apart. Now Mauro has to decide whether he'll become part of the system or if he has the courage to fight back. In one of the best performances by Damián Alcázar (La Ley de Herodes, El Crimen Del Padre Amaro), first time director Diego Muñoz Vega tells a chilling story that depicts how the police functions on a day by day basis.

As Dennis West writes for Cineaste: "Diego Muñoz Vega's ponderous and truculent police drama Bala mordida ... sketches such an unrelenting vision of ingrained corruption in the Mexico City police force that a foreigner may be left wondering just how that nation's levels of bureaucracy function and co-exist. Here we have one government agency, the Mexican National Film Institute (Instituto Mexicano de Cinematografia), a co-producer of this major feature film, using its funding to relentlessly criticize another government agency, a municipal police force. Both entities live in each other's shadow in the same city."

Gabino, a 24-year-old man, works as a moving-truck driver in Mexico City. He lives with his mother, Teresa, with whom he has a distant relationship. She wishes Gabino was more like Miguel, her other son, who she believes has a decent job and a good lifestyle. Miguel, however, doesn't care much about his family and never visits them. 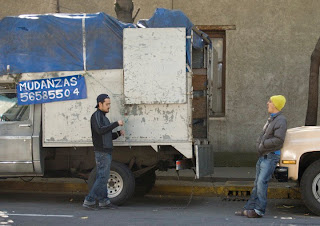 As Neil Young dispatched from the San Sebastian Film Festival, Perpetuum Mobile "proved unexpectedly hilarious to many, though some were left bemused, baffled or bored by the quotidian verisimilitude of Pereda's approach. Every film festival has no shortage of these 33 1/3 r.p.m. enterprises among its selections these days, but the lo-fi, video-shot Perpetuum Mobile is executed with an unfussy panache that proves weirdly compelling—and, after the credits have rolled—hauntingly resonant." Dispatching to Twitch from the Guadalajara International Film Festival—where Perpetuum Mobile won Best Mexican Feature—Todd Brown wrote: "Anyone with a bit of Latin can explain to you the joke built in to the title of Mexican slacker drama Perpetuum Mobile. Because, despite what the title may imply, this is a film in which nothing ever happens. And that's kind of the point." 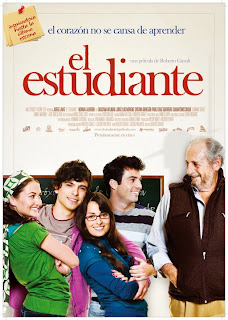 Set against the colorful atmosphere of Guanajuato, this comedy captures the adventure of Chano, a retired 70-year-old man who decides—after mixed recommendations from his family—to enroll in college. His presence impacts on his classmates and breaches the generational gap. Chano gives his college classmates advice, and in the process learns a few lessons along the way. 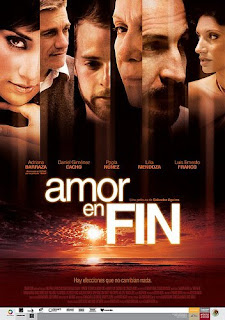 Becloud is the story of Andrés, José and Felipe, three young boys facing post-adolescent limbo. The memory of a man's lynching—indirectly caused by them during their childhood—brings them together and at the same time separates them. The story takes place in Iztapalapa, a humble and forgotten area, lavish in its fervent demonstrations of faith but, undoubtedly, the most arid place in Mexico City. 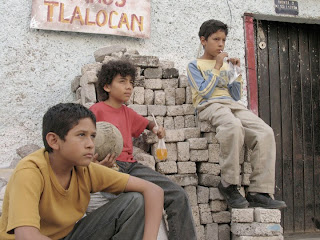 As reported earlier on The Evening Class, Becloud was selected for the Global Lens 2010 series and—based upon that association—is being featured as HMFF's opening night film and toasted at HMFF's Opening Night Fiesta at Mexico DF with live music and cocktails (tickets for the film and fiesta are $25). Director Alejandro Gerber Bicecci will be in attendance to introduce the film and for a post-screening Q&A. 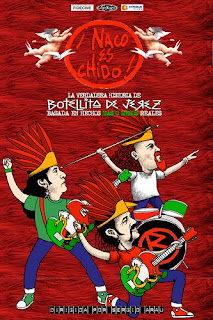 Directed by Sergio Arau (A Day Without A Mexican), Naco Es Chido is a rock comedy. In 1988, members of the famous Mexican rock band Botellita de Jerez disappeared along with the new record after a fist fight in a taxi cab. The story evolves 20 years later when the famous missing recordings are found in a junk yard. This incites the investigation to search for members of the band and the discovery of the plot that caused the disintegration of the group and that threatens them yet again.

Eight talented and experienced directors have 24 hrs to shoot and edit a short film in Playa Del Carmen, Mexico. Not your typical short film program, Sucedio En Un Dia, also known as Rally Malayerba PRO, show us a mix of short films that promise to make you laugh and cry. 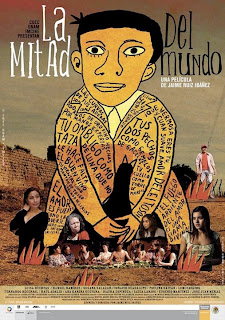 Mingo is a young, shy and innocent young man with a mild mental retardation. He is a romantic and a kind of poet. After an unusual sexual awakening, he gets involved with an older woman who introduces him to the highest pleasures and introduces him to some of her friends, she makes a lover out of him; although he surrenders to such temptations, Mingo is secretly in love with a girl that lives near him. Soon enough his adventures become common knowledge and that awakens his mother's worries. 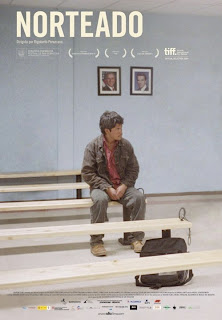 For those who missed Norteado at this year's San Francisco International, HMFF provides a second opportunity. Andrés travels from Oaxaca to Tijuana to cross the US border. Things don't result as planned and he has to stay in Tijuana where he starts working in a grocery store; there, he meets Elia, Cata and Asensio. What Andres finds in Tijuana makes him think about what he's about to do and become aware of what he's leaving behind. Norteado talks about the illusion that the United States represents for those who decide to cross the border searching for a better life.

As Jay Weissberg details at Variety: "Rigoberto Perezcano's understated, warm, non-exploitative take on a young man's failed crossings, and the temporary life he has in Tijuana, reps an impressive debut and heralds a much-needed new voice." At the Village Voice, Melissa Anderson concurs that Perezcano's "deceptively modest first feature is expansive enough to focus not only on the frustrations (and perils) of wanting to be elsewhere but also on the pleasures, however fleeting, to be found in transitional spaces." And as synopsized at the LA Weekly: "With a mostly unadorned, documentary-like (but beautifully photographed) style that allows for the dignity of broken souls to rise above a harsh environment, Perezcano nudges his talented actors toward moments of quietly powerful clarity, without histrionics or predictably fated ends. What's left is a sobering, charming and ultimately moving depiction of the geographical and emotional spaces that exist between places left behind and the ones we're in a hurry to get to."

Northless has garnered several awards at the Rotterdam, San Sebastián, Thessaloniki, and Marrakech film festivals, including the FIPRESCI prize at the Bratislava International Film Festival. 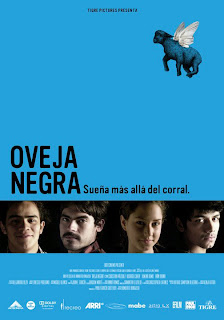 Two friends that work on a ranch herding sheep are fed up with their mistreatment by their boss. They come up with a plan to steal the sheep and sell them at the Mexican-American border. Jeronimo, the boss's son, will do anything in his power to catch them and not let them get away with anything that someday will rightfully be his.

Dispatching to Cineaste from the Guadalajara International Film Festival, Dennis West writes: "The best Mexican fiction feature I came upon was the young screenwriter-director Humberto Hinojosa Oscariz’s rural drama Black Sheep, set deep in the contemporary—and violence-prone—Mexican countryside. Many of the elements of this narrative hark back to musty Mexican melodramas and ranch comedies from the 1940s: the brutal and authoritarian hacendado (big landowner); his pampered son, a Mexican macho, who as a matter of course runs amuck; the thoroughly exploited peons who everlastingly toil on the ranch; and, of course, the inevitable class conflict in its many manifestations—from rustled sheep to affairs of the heart. Perhaps Hinojosa Oscariz's principal achievement is to creatively mix comedy and tragedy in order to make these characters well rounded yet unpredictable, and, even, human. The village priest, for instance, is not some sort of predictable stereotype. He routinely purloins funds destined for the poor to straightforwardly satisfy his selfish and all-too-human desire to buy himself the very latest model TV. In an unusual turn of events as far as the awarding of prizes at international film festivals goes, Black Sheep captured both the FIPRESCI Prize for the best Mexican opera prima and also the Prize of the Public. Seldom do the general admission ticket holders and the supposedly sophisticated international critics make identical artistic decisions." 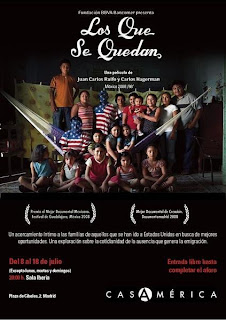 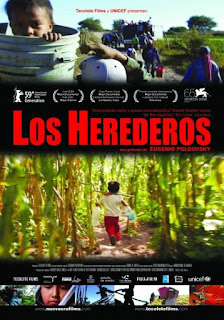 At an early age children begin to work in the Mexican countryside. The Inheritors is a portrait of their lives and their daily struggle for survival. These children work farming, sculpting, and laboring in a myriad of other activities. They have inherited tools and techniques from their ancestors, but they have also inherited their day-by-day hardship. Generations pass, and child workers remain captive in a cycle of inherited poverty.

Winner of the Silver Ariel for Best Editing and Best Feature Length Documentary at the 2009 Ariel Awards and winner of Best Documentary at the 2009 Lima Latin American Film Festival. At The Hollywood Reporter, Neil Young characterizes The Inheritors as an awareness-raising "indictment" of child labor practices in modern rural Mexico.

Winner of six major festival awards, this Mexican blockbuster is an outrageous comedy that explores the battle of the sexes-and the exes! Sex-deprived Ana is nearly out of her mind with longing, until her wild ex-boyfriend, Thomas, shows up to visit Ana and her husband. Filled with outrageous humor and penetrating drama, Sexo, Pudor & Lágrimas is tantalizing from start to finish! 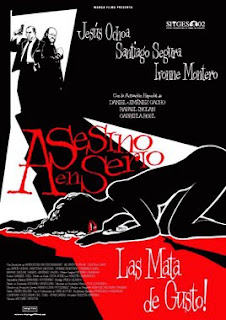 A Mexican entry into the "hip crime" genre popularized by Quentin Tarantino. Detective Martinez has been assigned to investigate a series of very unusual murders. It appears to the detective that a serial killer has been eliminating women by pleasuring them to death. Asesino En Serio is a sexy crime thriller with a heavily comic slant.

Hola Mexico Film Festival Schedule
HMFF will be venued at Landmark's Embarcadero Cinemas from May 6 through May 11, 2010. Be sure to check out HMFF on Facebook.