There's nothing like a birthday party to bring out the festive and when that party is to celebrate and honor noted Japanese filmmaker Akira Kurosawa on the 100th anniversary of his March 23 birthday, then it's very good reason indeed to shout out, "O-tanjôbi omedetô!"

For starters, Rizzoli has just published Akira Kurosawa: Master of Cinema authored by film historian Peter Cowie, with a preface by Kurosawa's daughter Kazuko Kurosawa, a foreword by Martin Scorsese, and an introduction by Donald Richie. The most lavishly produced and profusely illustrated volume on Akira Kurosawa ever published, Akira Kurosawa: Master of Cinema is the first illustrated book to pay tribute to Kurosawa's unmistakable style—with more than two hundred images, many never before published. The filmmaker is also famous for his attention to detail, and fans will delight in seeing annotated script pages, sketches, and storyboards that reveal the meticulous craft behind Kurosawa's genius. 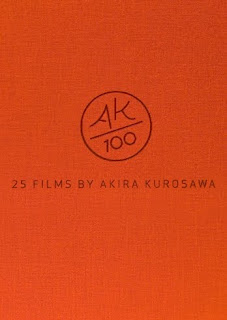 The Criterion Collection's AK 100: 25 Films by Akira Kurosawa likewise groups together 25 of Kurosawa's most beloved films in a linen-bound deluxe box set celebrating his astonishing career. AK 100 is the most complete set of Kurosawa's works ever released in this country, and includes four rare films that have never been available on DVD. As if that isn't enough, AK 100 comes with its own illustrated book featuring an introduction and notes on each of the films by Stephen Prince (The Warrior's Camera: The Cinema of Akira Kurosawa) and a remembrance by Donald Richie (The Films of Akira Kurosawa).

Naturally, The Auteurs Notebook has been all over this one. They've established a film-by-film discussion board and Glenn Kenney has done a particularly fine job of promoting the enhanced context the package supports. Kenney writes: "There's that old story about the anti-loyalty-oath Director's Guild meeting where an American master introduced himself by saying 'My name's John Ford. I make Westerns.' Some eager novices in Japanese film appreciation could well imagine Kurosawa introducing himself by saying 'I make chambara [sword-fighting] pictures.' But of course, just as Ford proved a master of several genres, Kurosawa too could not be pinned down. And, as with Ford, …all of Kurosawa's pictures say things about each other, whether watched in genre-specific groups, by period, or just chronologically across the course of his career as a whole, which mode this set definitely encouraged. To call the journey rewarding is rather an understatement. The individual pleasures never let up, and are invariably enhanced by context."

For those who can't quite afford the Criterion price tag, however, fear not. Turner Classic Movies launches their month-long celebration of Kurosawa's ouvre this coming week, crowned by a 24-hour marathon on Tuesday, March 23, the anniversary of Kurosawa's birth. "There are many reasons the name Akira Kurosawa means so much in the world of moviemaking, and we're going to be showing 26 of those reasons this month on Turner Classic Movies," says TCM host Robert Osborne. "It's the largest gathering of Kurosawa films we've ever shown in a retrospective of his work, and we couldn't be more excited." 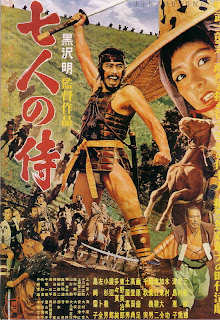 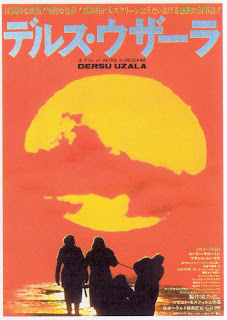 Among the films making their debut on TCM are two of Kurosawa's later films, Dersu Uzala (1975), which earned Kurosawa a Best Foreign Language Film Oscar®, and Ran (1985), which is based loosely on Shakespeare's King Lear. Also making their TCM premieres are The Idiot (1951), based on the book by Dostoyevksy, and The Most Beautiful (1944), a World War II drama that wasn't released in the United States until the late 1980s.

In addition to its slate of Kurosawa films, TCM will present two Westerns inspired by Kurosawa's work. On Sunday, March 21, a double-feature will include The Outrage (1964), an adaptation of Rashomon, and The Magnificent Seven (1960), adapted from Seven Samurai.

Below is a complete schedule of TCM's centennial celebration of Akira Kurosawa (all times shown are Pacific): 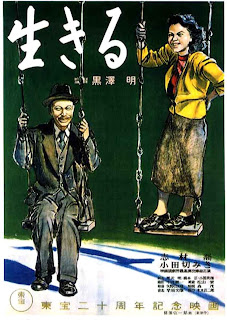 5:00PM Ikiru (1952)—Frequent Kurosawa actor Takashi Shimura turns in a heartbreaking performance as a man who finds out he only has a short time to live. Kurosawa explores the meaning of a man's life with this poignant drama. 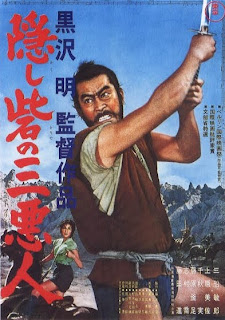 9:30PM The Hidden Fortress (1958)—One of Kurosawa's more whimsical samurai dramas, this film follows a pair of inept misfits as they try to help a princess pass through a rival territory. Mifune is the general who assists. George Lucas has acknowledged this rousing tale was the primary inspiration for his first Star Wars film.

12:00AM The Idiot (Hakuchi, 1951)—Dostoyevsky's tale of a love triangle served as the basis for this Kurosawa drama starring Mifune and Shimura. Kurosawa's original cut was edited down by the studio before release, but much of Kurosawa's brilliance remains.

3:00AM The Lower Depths (1957)—Kurosawa's adaptation of the Maxim Gorky play is a character study of a group of people living in poverty. Mifune leads a fine cast. Jean Renoir tackled the Gorky play in 1936, but Kurosawa remained more faithful to the original than the French master. 5:00PM The Bad Sleep Well (1960)—In this variation of Shakespeare's Hamlet, Kurosawa captures the feel of the great Warner Bros. crime dramas. Mifune stars as a man determined to exact revenge against the high-profile businessman he blames for his father's suicide.

7:45PM High and Low (1963)—Mifune plays a shoe company executive whose son is targeted for kidnapping. But the kidnappers end up taking his chauffeur's son instead. This cat-and-mouse thriller, based on an Ed McBain novel, provides a unique view of Japan in the 1960s. 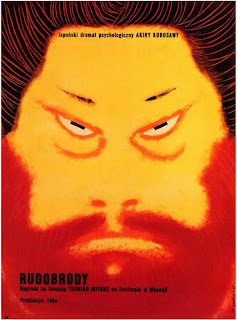 10:15PM Red Beard (1965)—Kurosawa and Mifune worked together for the last time with this gentle drama about a doctor and his intern, played by Yūzō Kayama.

1:30AM I Live in Fear (1955)—Mifune, nearly unrecognizable thanks to old-age makeup and a superb characterization, plays a successful businessman whose fear of nuclear war leads him to want to move his entire family from Japan to South America.

3:15AM Scandal (1950)—This Kurosawa drama stars Mifune as a painter who sues a magazine over a scandalous story. His lawsuit is threatened when his lawyer, whose daughter is deathly ill, takes a bribe to lose the case. 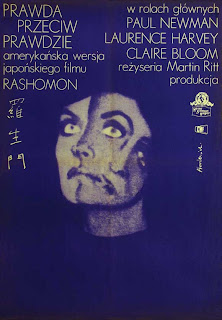 5:00PM The Outrage (1964)—In this remake of Kurosawa's Rashomon, Paul Newman plays the bandit who attacks a couple, played by Laurence Harvey and Clair Bloom. Each of the three has a different perspective on what exactly happened. Edward G. Robinson and William Shatner co-star.

7:00PM The Magnificent Seven (1960)—John Sturges' thrilling western is based on Kurosawa's Seven Samurai and stars Yul Brynner as the head of a gang of gunslingers who come to the aid of a village threatened by bandits. Steve McQueen, Eli Wallach, Horst Bucholz, James Coburn, Charles Bronson and Robert Vaughn co-star. Elmer Bernstein provided the memorable score. 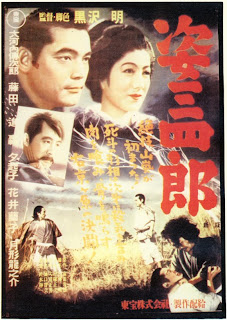 3:00AM Sanshiro Sugata (1943)—Kurosawa's first feature film as director is the simple tale of a young judo fighter who must battle another fighter over a woman. The outstanding use of photographic composition and sound make this one of the more striking martial arts films of the era.

4:30AM The Most Beautiful (1944)—Kurosawa's story of young women working in a factory during World War II stars Shimura as their difficult foreman. This interesting early work from Kurosawa includes several elements of pro-Japanese propaganda. 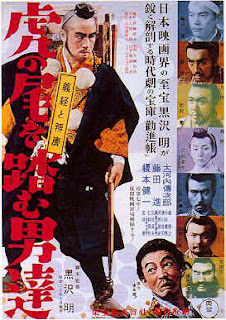 6:00AM The Men Who Tread on the Tiger's Tail (1945)—Based on a Kabuki play, this film tells the story of a lord who disguises himself and his generals as monks in order to avoid detection from the lord's murderous brother. This film was banned twice in Japan, first for not being faithful to is source material and then again by the occupation forces for its favorable depiction of feudal militarism.

7:00AM Sanshiro Sugata, Part 2 (1945)—Bordering on outright propaganda, this government-suggested film uses judo as the background for a story extolling the virtues of Japanese warriors. 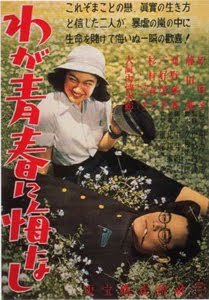 8:30AM No Regrets for Our Youth (1946)—In this revealing domestic drama, a young woman learns about life after leaving the politically charged atmosphere of Tokyo and going to the country house of her executed boyfriend's parents.

10:30AM One Wonderful Sunday (1947)—Dreams and despair collide in this gentle drama about a couple who try to spend a Sunday afternoon on just 35 yen.

12:30PM Drunken Angel (1948)—An uneasy friendship between an alcoholic doctor and a gangster is at the center of this gripping drama featuring Shimura and Mifune in two early Kurosawa performances.

2:30PM Stray Dog (1949)—A grueling heat wave becomes its own character in this outstanding drama about a pair of police officers determined to track down a gun that was stolen from one of them. Shimura and Mifune play the cops. Kurosawa uses the story as an opportunity to shed light on the difficulties Japanese soldiers faced when they came home from the war. 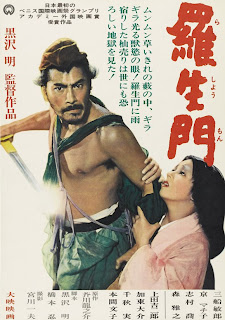 5:00PM Rashomon (1950)—This groundbreaking film established a new story-telling style using the different points of view of several characters to explore the meaning of truth. Mifune is a bandit who attacks a couple and kills the husband. But as each person's story reveals, truth may be in the eye of the beholder. This film won Kurosawa an Oscar® for Best Foreign Film. The title has now become synonymous with the multiple-storytelling style the film established.

6:30PM Seven Samurai (1954)—Considered by many critics to be among the greatest films ever made, this extraordinary tale follows a group of ronin (masterless samurai) who agree to protect a village against bandits. Kurosawa explores everything from class distinctions to the nature of violence in this deeply humanistic film starring Shimura, Mifune and a host of stock Kurosawa performers. Tatsuya Nakadai, who would later play the lead roles in such Kurosawa epics as Kagemusha and Ran, can be seen briefly as one of the samurai walking through the town in the first half of the film. Kurosawa's use of slow-motion death scenes greatly influenced the work of Sam Peckinpah. 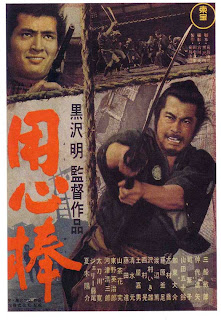 10:00PM Yojimbo (1961)—This Cold War allegory features Mifune as a samurai who plays two sides of a warring town against each other. Kurosawa uses satire and cynicism to tell a story that in many ways reveals the worst in human nature. This film was later remade by Sergio Leone as the 1964 spaghetti western Fistful of Dollars.

12:00AM Sanjuro (1962)—Mifune returns as the nameless samurai in this humor-laced action flick. This time around, he helps a group of young warriors expose corruption within the leadership of their clan.

1:45AM Dodes 'Ka-Den (1970)—Kurosawa's first color film is a character study of various people living in a Tokyo slum. The director uses his painter's eye to craft a unique color scheme. The title refers to the sound Tokyo streetcars make as they travel down a track. Noted symphonic composer Tōru Takemitsu created the enchanting score. 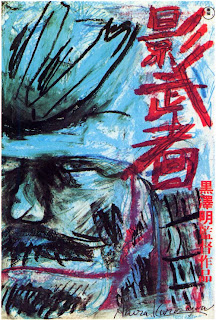 5:00PM Dersu Uzala (1975)—Kurosawa won his second Oscar with this story of a Goldi tribe hunter who teaches a Russian explorer how to survive in the harsh Siberian terrain. The pair gradually come to understand one another, despite the remarkably different worlds from which they come.

7:30PM Kagemusha (1980)—George Lucas and Francis Coppola served as producers on this extraordinary epic about a thief who is used as a double for a noble lord. But when the lord dies, the thief has to become him. Tatsuya Nakadai plays the thief, a role that was eventually supposed to go to box-office star Shintaro Katsu, but Kurosawa objected to Katsu's demand that he have his own personal video crew on the set and fired him. At the time this film was made, Kurosawa was having difficult securing financial backing. So he appeared in a series of Suntory Whiskey commercials shot on the set. Kagemusha marked Kurosawa's final film with actor Takashi Shimura. 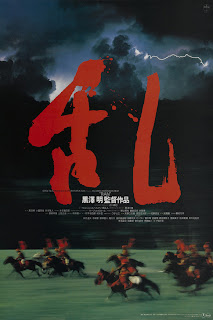 10:45PM Ran (1985)—Kurosawa adapted Shakespeare's King Lear with this lavishly produced film about a lord who divides his kingdom among three sons, inviting disaster in the process. Nakadai once again takes the lead as the lord, who eventually goes insane as he sees his entire land descend into chaos. Mieko Harada, as the lord's daughter-in-law, creates one of cinema's most memorable and conniving villains. Gender-bending star Peter plays the lord's jester. Costume designer Emi Wada took home an Oscar® for her work.