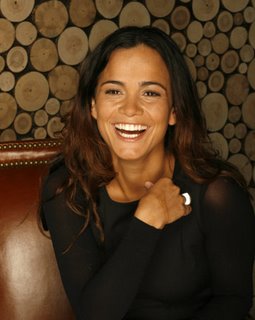 As I mentioned in my earlier entry on this year's Latino Line-up for SFIFF, Alice (pronounced Alicia) Braga has the sweet distinction of having two films screening at this year's festival: Sólo Dios Sabe and Lower City.

I caught up with Alice after yesterday's screening of Lower City. She was excitedly on her way to her first American baseball game but graciously granted me time for a brief interview.

AB: Nice! Where you from?

EC: Well, you have the fortuitous opportunity of having two of your films screening at this year's festival so I thought it would be great to talk about your two characters: Dolores in Sólo Dios Sabe and Karina in Lower City. Both roles are beautiful women dealing with issues of relationship and pregnancy. I just watched you in Lower City and the pregnancy there was left somewhat open-ended whereas it played a crucial role in Sólo Dios Sabe. Not to pit one film against the other, but I loved Sólo Dios Sabe! It's been great to see your work in both films; I cannot believe you're a brand-new actress!

AB: Yeah, I just decided. Actually I started last year, the year that I shot Lower City. I did Lower City, a week after I [finished] Lower City I came to San Francisco to meet the director Carlos Bolado from Sólo Dios Sabe, and I did it. So it was a year that I was just throwing myself into acting.

EC: So you're working with all the fresh young directors? Carlos Bolado, Sérgio Machado, Heitor Dhalia!

AB: Yeah, yeah, it's really nice. It was really great because, after City of God, a door opened for me, I started to study more and to try to grab more stuff so as soon as I started to work in different films I had to quit my university, just [stop] a bit and leave it there to working. But now I'm studying, coming and going, I did some theater when I was in school, I'm just living, step by step, but I was really lucky that I got two beautiful characters to play.

EC: Well, there's luck, but you're following through with the work. You're doing very good work.

EC: Alice, you're such a troublemaker in Lower City! I was wondering if you could speak a little bit about Karina's inability to choose between the two men?

AB: She's really a challenging character for me because she is 20 years old and she has had such a strong life and so many things that she's been through for a girl alone in the world; but she's a woman. So there was this—how they say?—being a woman and a girl at the same time with the same intensity was quite challenging for me. And you asked about choosing between them, right?

AB: It's hard because she loves both. Sérgio always said to us—like, for me—that they love each other with the same intensity. It's like an equilateral triangle. Like Deco [Lázaro Ramos] loves Naldinho [Wagner Moura], Naldinho loves Karina, Karina loves Deco and Naldinho with the same intensity. So I think she loves their relationship and their friendship. That's why at the end of it I think she tries to leave and [not] be with them because she knows they're going to kill each other. They can't support sharing her. It's hard to explain. But she loves them both with the same intensity. She loves things in Deco, she loves things in Naldinho, that she can't choose. It was hard! It was hard for me because sometimes [on] the set everyone started to think, nah, but she needs to go for this way or that way, but she can't! And I loved both actors. It was funny because they were always like, "Don't love him more. Don't love him more. Don't love him more than me!" And I was like, "Oh my god!" And it was challenging for that. What do you think? Do you think she loves one more than the other one?

EC: No, I didn't. I thought the ending was perfectly balanced, that you felt all their pain.

AB: That's great! Because it was challenging for us. Sometimes in the script when we read, lots of the people from the crew thought that she liked Deco more. So Wagner, Naldinho, he was like freaking out!

EC: There's a quality that you bring to the Lower City character Karina but also to the character Dolores in Sólo Dios Sabe that I admire—it's in both of them—a quality of worldliness beyond years. Both characters are girls really but you have an ability to communicate with your eyes a mature woman's worldly experience.

AB: Thank you very much. That's so beautiful to hear that, listen, it's good to hear this response.

EC: Can you talk a little bit about Dolores? What drew you to that role? I loved her character!

AB: That's great! She's a really tough role. They have such a thing that shows life, Karina and Dolores, they're both lonely people. Dolores has a mom, her father died when she was a kid, and she doesn't have a good relationship with her mom. She's been far away from her house so she lives in another country, a foreign country, by herself. Karina never had a family, she lives by herself, she's alone in the world. They're two different roles but with similar life, similar feelings, like loneliness.

EC: What I loved about Dolores is that she starts out in Sólo Dios Sabe cynical because she's been taken advantage of, and skeptical of anything spiritual, and yet in the final scenes of that movie I realized that she's the one who believes in this invisible world more than anybody else!

AB: Exactly! She just needed someone to sit down with her and show her a little bit about love and life, and to be in a relationship.

EC: Do you know Andrucha Waddington?

AB: No. I met him in Brazil really briefly, like really fast. But I haven't met him.

EC: I was talking with him yesterday and he told me his new film is going to be Conquistador; it's about Hernan Cortez. You should play Malinche!

AB: But she talks Spanish. I do talk Spanish but I don't know … I don't know, I'm not sure if he has me in his mind….

EC: The next film that you're doing?

AB: A Journey to the End of the Night. It's an American production. They shot in Brazil but it's an American film. We shot in October, last October. My character's a really nice girl. She lives in Brazil. She's one of the survivors, those girls that just survive in the big city and a big environment and she gets a ride with Mos Def's character. He's in the film; it's Mos Def, Brendan Fraser, Scott Glenn, and Catalina Sandino Moreno. 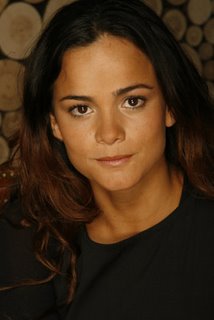 EC: You're getting to work with everybody!!

AB: Yeah, it's really nice! The director [Eric Eason]'s a really independent guy and filmmaker. His first film was Manito. It was really good experience. And now I'm going to start back to release that. I think it's fine. It's a really nice film, this one.

EC: You'll be here also for the screening of Sólo Dios Sabe?

AB: No, I won't be able because I'm going to be there doing press for that one. [A Journey to the End of Night is having its world premiere at the Tribeca Film Festival on Friday, the 28th.]

AB: Talking about Dolores, she is the kind of people that seems tough but is really sweet inside. She just needed someone to grab her hand to get her together. I think she was a really nice character to do because it's about protecting yourself and trying to let it go. And it's something that we need to do nowadays because sometimes we're so, like, trying to protect ourselves from everything because the world is so hard with us. Sometimes we need to let it go and open the door for the destiny, or for a love.

EC: What was it like working with Diego Luna?

AB: Amazing! He's a really nice person. A really amazing actor and really giving and really sweet. I had a great time. I learned a lot from him. He's been an actor since he was a baby!

EC: What do you want to do next?

AB: I want to do theater! I haven't got a chance to do theater professionally. Just having classes and everything. So I want to do a bit of theater. I want to study, maybe coming to New York, or San Francisco. Just opening doors. And now I want to keep doing cinema, that is my passion, that is what I love. But theater! To grow up and keep going.

EC: Well, I have to tell you, I think you're heading for a brilliant career. I'm a gay guy myself but I could almost go straight for you!

AB: [Laughing] Thank you very much! That's BEAUTIFUL! I LOVE IT! [She gives me a big kiss.] I'm going to say like, "Now, you're going to be straight. I'm going to meet you in San Francisco and say, okay! Let's go for a beer!!"