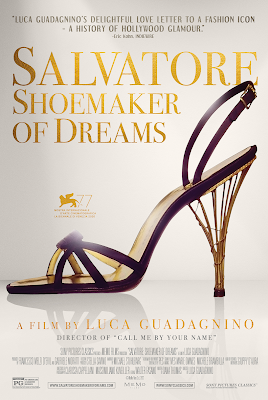 Not since Prince Charming fitted the glass slipper onto Cinderella’s foot has a rags-to-riches story been so compelling as Luca Guadagnino’s affectionate portrait of Salvatore Ferragamo, the “shoemaker to the stars.” Finessing the fairytale of Cinderella casts Ferragamo in the role of the prince whose adoration and persistence transforms the young girl’s life forever. And isn’t that the dream of every young girl, let alone every prince? In reality, Ferragamo enhanced the lives of a multitude of women.

As dreams and fairytales and heroes journeys go, Ferragamo has been true to the template. As a young man he proceeded—as psychologist C.G. Jung advised—from the dream outward, careful to dream in detail, answering the call of his own true nature and, thereby, seeking and gaining his fortune and—as mythologist Joseph Campbell coined it—finding his bliss. As a filmic project, Guadagnino’s Salvatore: Shoemaker of Dreams (2020) likewise remains true to its desire of profiling the remarkable talent and ingenuity of Salvatore Ferragamo who lifted himself and his family out of poverty, was a witnessing participant and active architect of cinema as we now know it, and revolutionized the creative art and patented industry of fashion.

Guadagnino achieves his portrait of Ferragamo through strong, stylistic elements. First, his talking heads invite reminisces from family members (Ferragamo’s wife Wanda and their children and grandchildren), and informed commentary from fashion and film critics, and art historians, including an ever self-bemused Martin Scorsese whose shoulders jiggle up and down every time he cracks a joke. But the documentary also allows Ferragamo to speak for himself through his 1955 memoir (from which the film lifts its title), narrated by actor Michael Stuhlbarg. This composite narrative of memoir, recollection and erudition takes the viewer on a journey from Bonito, Italy, to southern California and the auspicious beginnings of Hollywood, then back to a storied studio in Florence, Italy.

It’s when Ferragamo secures the Palazzo Spini Feroni in Florence to serve as his shoemaking studio that Guadagnino cleverly and deftly scores an instrumental version of “It’s So Nice To Have A Man Around the House” and he romanticizes Ferragamo’s home movie footage of his young bride Wanda by playing “I Get Misty”. These musical touches add romance and humor to the dream.

I was intrigued, if not a bit put off, however, by Guadagnino’s stylistic choice of having his camera shoot his subjects literally over his shoulder, an odd visual convention that insinuated the director into his film. Perhaps the intent was to parlay a conversational feel to his interaction with his interview subjects? Notwithstanding, I found myself wishing he had cropped himself out of the image. Whereas in his memoir Ferragamo looked back over his shoulder to account for his life, Guadagnino’s convention seemed an effort to look forward towards his recitation of Ferragamo’s tale.

Aspects of that tale are undeniably fascinating for being an insider’s history. Ferragamo’s clients numbered film stars and celebrities from his earliest days in Hollywood, including Gloria Swanson, Pola Negri, Dorothy and Lillian Gish, and Cecil B. DeMille. Later, he designed shoes for Eva Peron, Marilyn Monroe, Audrey Hepburn, Sophia Loren, Greta Garbo, Andy Warhol, Princess Diana, and a handbag or two for Margaret Thatcher, among many many others. Not only was Ferragamo present when moviemaking elevated itself into the seventh art, but in commensurate alignment he raised the fashion of shoemaking into an art form. His most famous invention is arguably the "Cage heel" (featured on the film’s theatrical poster), but in 1938 he also created “The Rainbow”, the first instance of the platform shoe designed for American singer and actress Judy Garland. The shoe was a tribute to Garland's signature song "Over the Rainbow" performed in The Wizard of Oz (1939) feature film.

Nuggets of experiential wisdom reveal themselves in the recitation of Ferragamo’s biography. He is notable for underscoring that—through perseverance and ingenuity—one can be personally successful during a cultural moment of difficulty (i.e., the Depression). Keen on filing patents for his designs and inventions, Ferragamo understood that innovation works against decadence. And, again on a Jungian note, the synchronic encounter between Ferragamo and Christian Dior and their subsequent collaborations give credence to being in the right place at the right time; though one could argue that Ferragamo was a master at insuring that whatever place or time he was at would be nothing but right.

The film’s final sequence is a thrilling Busby Berkley-ish animation of Ferragamo’s creations; an extraordinary “shoe ballet” created by stop-motion artist PES. When the red slippers click three times in that sequence it’s as if to say that home is not only where the heart is, but more importantly, where the dream lives.

Salvatore: Shoemaker of Dreams is a Sony Pictures Classics release, runs 121 minutes, is in English & Italian with English Subtitles, and is rated PG by the MPA. It has opened in select cities, including Landmark's Opera Plaza Cinema, San Francisco. It opens December 2, 2022 at The Flicks in Boise, Idaho.