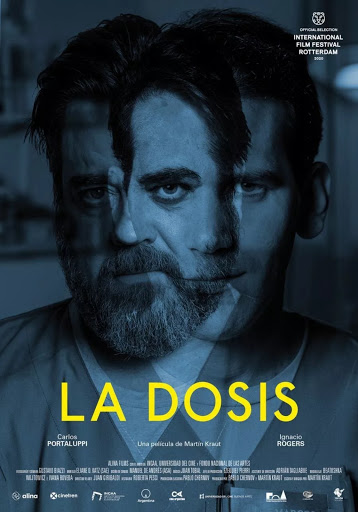 How do you envision an angel of death? Is the angel gendered male or female, robed in religiosity? If male, is he young, handsome and kind, like Robert Redford in his role as wounded police officer Harold Beldin in the 1962 Twilight Zone episode “Nothing In the Dark”? Or is he burly and rotund, a seasoned male nurse in a palliative care ward named Marcos (Carlos Portaluppi), an Argentine Raymond Burr hiding in plain sight?

Like apples and oranges, I’m referencing two wholly different angels of death. Redford as Beldin is an angel of death whose responsibility as a psychopomp is to escort newly deceased souls from Earth to the afterlife. His role is not to judge the elderly Gladys Cooper—so afraid of dying—but simply to guide her out of the apartment that she has refused to leave, to allow “the old to make room for the new.”

Marcos, on the other hand, is a secular angel of death comporting with the euphemism used by criminologists to describe hospital employees who—for one reason or another—take it upon themselves to euthanize the elderly and chronically ill. Likewise branded as “angels of mercy”, Marcos administers “mercy” out of empathic pity; he feels for the suffering of the terminally ill. As arguably delusional as his empathy might be, it motivates him to behave as a casebook “malignant hero” when in an opening sequence he breaks protocol and takes it upon himself to revive a patient that the doctors have pronounced dead. He wants to be seen as selflessly making an effort even if he is criticized for overreaching bounds and his “heroism” allows him to judge and criticize his superiors who he believes care nothing about the suffering of their patients. His logic is circular. If the doctors will do nothing to relieve the suffering of the terminally ill—in effect, allowing them to die as animals—then he has the right to use their trust in him to schedule himself for late night shifts where he can put these poor souls out of their misery by giving them a special “dose” to edge matters along.

Enter Gabriel, a new nurse on rounds, who—discovering Marcos’ secret—feels emboldened to mimic Marcos; motivated more, however, by pleasure than pity. Gabriel (Ignacio Rogers)—a dead ringer for Anthony Perkins in Hitchcock’s Psycho—shares Marcos’ eye about what should be done with the terminally ill, but begins to loosen the definition of terminal and escalates the practice to include the treatable, thereby personifying a true angel of death and less an angel of mercy. He’s not really practicing euthanasia—which requires a certain level of compassion—but murder, plain and simple, front and center, perhaps because he can and unquestionably because he enjoys it.  The film’s theatrical poster visually synopsizes how the two nurses share a perspective (a shared eye), albeit at risk of a conflict of interest. More accurately, however, theirs is not a conflict of interest at all, but a conflation of interest, articulated by the film’s theatrical poster. 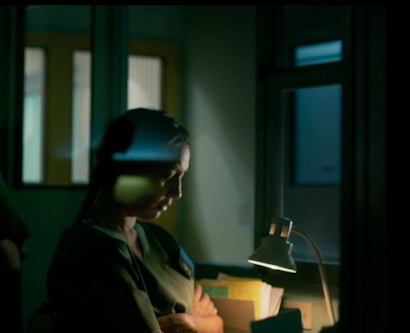 Argentine helmer Martín Kraut’s debut feature La Dosis [official website], in its North American premiere at Fantasia, is an effective psychological thriller that ramps up tension between the two angels of mercy and provocatively stages their tension as a merciless cat-and-mouse romance. Not since Baran Bo Odar’s The Silence (2010) have two men, compelled by a shared desire outside the realm of normalcy, been so passionately drawn to each other (though equally repelled). Kraut’s complicated script (he’s also the film’s producer) is strengthened by its exploration of how an empath falls under the thrall and manipulation of a narcissistic sociopath; an all too common dyad in today’s world. Suspensefully directed, palpably acted, and sensually portrayed on screen, this unpleasant subject is a slow burn narrative as chilling as a morphine drip, but rendered evocative through a blue and green color palette engineered by Juan Giribaldi’s art direction and Gustavo Biazzi’s beautiful cinematography. The screen capture at left is a compelling sample of their combined efforts.
Posted by Michael Guillen at 9/01/2020 08:05:00 PM