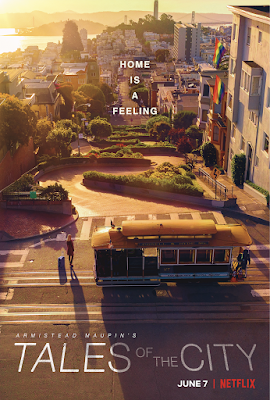 I worked as a dishwasher / busboy / waiter at Fanny's Cabaret in 1978 when I was a young man growing up gay in San Francisco's Castro district. As we set up tables and sprinkled cinnamon and vanilla extract into the coffee brewing for our Sunday brunch patrons, our conversations were lively with disco lyrics, things Herb Caen had noticed that day (or what others had noticed for him), and the goings-on of the residents at 28 Barbary Lane who, delightedly, seemed to be growing up right alongside San Francisco's burgeoning gay subculture. In many ways Anna Madrigal and Mary Ann Singleton stood in for our experience of participating in the creation of a progressive San Francisco, so many of us having come from elsewhere. The first four volumes of Armistaud Maupin's Tales of the City nine-novel cycle were serialized in the San Francisco Chronicle in columnar installments, followed by the fifth at the San Francisco Examiner, while the rest of the series arrived fully novelized, eventually televised, and suitably iconized. Serializing his story allowed Maupin to publish quickly after writing, incorporating current events and trends, which added an everyday realism to the Barbary Lane narratives. To paraphrase Black Elk, 28 Barbary Lane might have actually been Macondray Lane in San Francisco, but 28 Barbary Lane was everywhere.

Nine novelizations and three televised adaptations later, Armistaud Maupin's Tales of the City returns to San Francisco in a limited Netflix original series premiering as the opening night entry for the 2019 edition of the SFFilm Festival, in anticipation of its June 7 broadcast date.

As synopsized in the program notes: "Mary Ann (Laura Linney) returns to present-day San Francisco and is reunited with her daughter Shawna (Ellen Page) and ex-husband Brian (Paul Gross), 20 years after leaving them behind to pursue her career. Fleeing the midlife crisis that her picture-perfect Connecticut life created, Mary Ann is quickly drawn back into the orbit of Anna Madrigal (Olympia Dukakis) and her chosen family, the residents of 28 Barbary Lane."