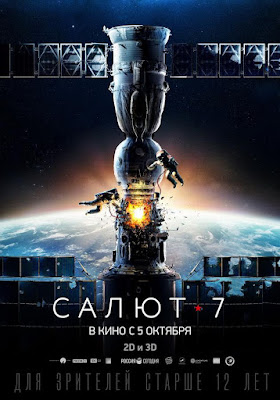 Every year the festival gathers a few films with a common theme and places them under a "Spotlight" umbrella. This year's designated leitmotif is "Into the Great Beyond" and I was able to preview two of the three films. Klim Shipenko's Salyut-7 is a thoroughly satisfying outer space thriller that won Best Picture at last year's Golden Eagle Awards (Russia's Oscar® equivalent). Based on actual events, the Salyut-7 episode is sometimes referred to as Russia's Apollo 13. In 1985, two U.S.S.R. cosmonauts were sent to rescue a damaged, unmanned space station before it was captured by Americans. Shipenko's retelling of their close call with oblivion is nerve-wracking, humanist, frequently comic and of course, just a little nationalistic. It also boasts special effects that rival Alfonso Cuaron's Gravity. My only complaint is the ending seems a bit unsettled for those not familiar with the actual events. Salyut-7 is already available to stream on Amazon Prime, but you'll want to see it on the biggest screen possible. Which I'm sure is why SFFILM chose the Castro Theatre for its single festival screening on April 8. Sometimes it's great fun to experience another country's big-budget blockbuster. This is such an occasion. 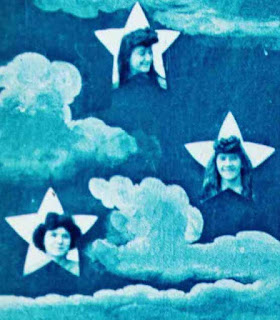 Austrian director Johann Lurf's ★ (Star) screens in the festival's experimental Vanguard section. It is essentially a 99-minute representational compilation film in which movie scenes of star-spangled nighttime skies are viewed in succession, with their original music scores, aspect ratio and unsubtitled dialogue left intact. Clips from 550 films are experienced in chronological order, beginning with 1905's Rêve de la lune running all the way up to 2017's Girls Trip. A few are easily recognizable—Night of the Hunter, 2001, various stars of Bethlehem, Star Wars and Star Trek. But the hundreds of others? I had no clue I'd just watched the likes of Wayne's World, Antichrist, Stromboli, The Big Lebowski, Plan 9 from Outer Space, Howard the Duck and I Walked With a Zombie. Numerous Japanese clips (Takeshi Kitano's Hana-bi) get screen time, as well as experimental works from Man Ray and Maya Deren. The credits end with a year-by-year listing of all 550 films, which would be more beneficial to viewers if presented at the beginning. All the more reason to watch the film again, I suppose. One caveat—given the subject matter, you might be imagining ★ (Star) as a relaxing and dreamy viewing experience. It isn't. Many clips run just a second or two, and the constantly shifting aspect ratios and audio render it more akin to watching a schizoid astronomer channel-surf. 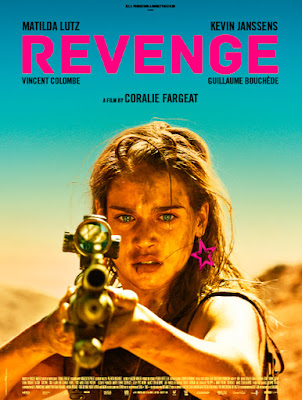 I'm not much of a genre film fan, but that hasn't stopped me from being very excited about the films in this year's Dark Wave section. All four, incidentally, hail from outside the U.S. Robin Aubert's French-Canadian zombie flick Ravenous is already streaming on Netflix, but I've resisted having a look in favor of screaming bloody murder with a live festival audience. The movie scores big bonus points for starring Monia Chokri, the actress who played Xavier Dolan's droll competitor for the attentions of a blond Adonis in 2010's highly underrated Heartbeats. France's Dark Wave entry is Revenge, a female-directed (Coralie Fargeat) rape revenge thriller that's promising to crank the gruesome sub-genres' tropes up to 11, while remaining distinctive and smart. Fargeat's film garnered near-unanimous raves on the festival circuit, with The Hollywood Reporter's David Rooney proclaiming it a "pop art carnage opera" that is "nothing if not relentless." SFFILM Fest's own description boasts that "one could paint a mansion with the amount of blood that gushes" from Revenge. Color me eager to be nauseated. 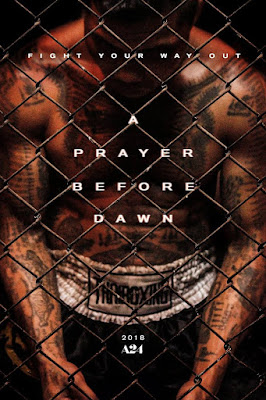 The other two Dark Wave entries are from the UK and both have secured considerable critical praise. Michael Pearce's Beast is a piece of intense arthouse horror that premiered at Toronto. Set on the remote isle of Jersey, Beast concerns a young woman whose struggle against her controlling family intensifies after meeting a sexy stranger—one who may or may not be a serial killer. The film's trailer is downright unnerving. Jean-Stepháne Sauvaire's A Prayer Before Dawn is a UK/France co-production that premiered as a Cannes midnight screening. Based on true events, the film stars Joe Cole as Billy Moore, a fighter and heroin addict who's arrested and thrown in Thai prison. While there he trains in the art of Muay Thai boxing, eventually becoming a champion who's permitted to earn his release. (The film was shot in an actual Thai prison). Boxing movies are decidedly not my thing, but I'm giving this one a shot.

Bay Area exhibition of French-language films suffered a real blow when SFFILM discontinued its French Cinema Now series two years ago. Couple that with fewer French films than ever achieving local theatrical release (even ones with U.S. distribution), and we're left with general interest festivals like SFFILM and Mill Valley to pick up the slack. The good news is that this year's SFFILM Festival has programmed three films that were a significant part of the conversation surrounding French cinema in 2017. The not so good news is that a dozen or two other noteworthy works will remain elusive to us, at least for the time being. 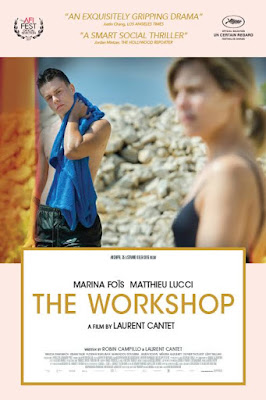 I strongly recommend catching Laurent Cantet's The Workshop at the festival. It was one of the best things I saw at this year's Palm Springs International Film Fest and it appears distributor Strand Releasing might no longer be planning a local release. The Workshop premiered in Cannes' Un Certain Regard sidebar and was immediately hailed as the director's best work since 2008's Palme d'or winner The Class. Writer/director Robin Campillo (last year's French Oscar® submission BPM) is back on board as co-screenwriter, a position he's assumed on all Cantet's best films. Actress Marina Foïs (never better) plays a renowned author conducting a student summer writing workshop in a depressed coastal town near Marseilles. The goal is to collectively write a locally-set murder mystery. Things take a dark turn when a taciturn student (a brilliant debut by Matthieu Lucci) who's swayed by right-wing Nationalist politics becomes a threat to both his multi-culti classmates and especially the author herself. Not to be missed. 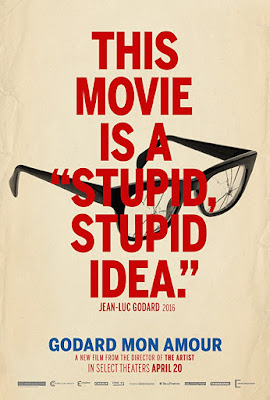 The other two films I referenced were Cannes premieres, as well as the first movies I made sure to work into my festival schedule. Following the disappointment of 2014's turgid The Search, Oscar®-winning filmmaker Michel Hazanavicius (The Artist) came back last year with Godard, Mon Amour, a combination spoof and homage to the revolutionary French New Wave director circa 1968. In this crucial year for politics around the globe, Godard was newly married and in love (with actress Anne Wiazemsky, the girl in Bresson's Au hazard Balthazar, who co-wrote the screenplay and is played by Stacy Martin). He was also breaking new ground as a political filmmaker. The impossibly handsome Louis Garrel has been appropriately uglied-up and nerdified to play the lead, and judging from the trailer, he's hilariously spot-on in his inhabitation of M. Jean-Luc. Godard, Mon Amour opens at local Landmark Theatres on April 27. But you'll certainly want to catch the film at its two festival screenings with director Michel Hazanavicius in person. The filmmaker last appeared at a SFFILM event when he attended 2009's French Cinema Now with OSS 117: Lost in Rio. 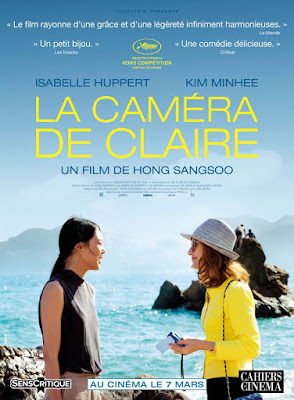 The third film isn't even really French. It's included here because its star is France's most acclaimed screen performer and Cannes is the film's setting. Hong Sang-soo's Claire's Camera was just one of three new features released by Asia's most prolific arthouse filmmaker last year. Isabelle Huppert returns for a second Hong collaboration, building on the artistic success of 2012's In Another Country. This time Huppert plays a teacher attending Cannes because a friend has a film screening there. While wandering the streets she strikes up a friendship with a South Korean film sales assistant who's just been fired from her job (frequent Hong star and real-life main squeeze, Kim Min-hee.) Claire believes her Polaroid camera has a mystical power to change lives, a dabble in magic realism that may be a first for the director. Running a brisk 68 minutes, Claire's Camera was appreciated by critics for its melancholic slightness. The title is a hat's tip to Eric Rohmer (Claire's Knee), the revered French director whose conversation-laden explorations of male/female dynamics Hong's films are frequently compared.

Following the glorious one-two punch of Hong's sublime Hill of Freedom (2014) and Right Now, Wrong Then (2015), I was left completely cold by his next two films, Yourself and Yours (2016) and On the Beach at Night Alone (2017). I fully expect Claire's Camera will bring me back into the fold. As for Huppert, Claire's Camera is only one of nine works released since her Oscar®-nominated performance in Elle. In the Bay Area we've only been privy to two of them, Michael Haneke's Happy End and the made-for-TV movie False Confessions. At the very least I'm hoping we eventually see Serge Bozon's Madame Hyde, for which Huppert won Best Actress at last summer's Locarno Film Festival. SFFILM Festival has been a past champion of Bozon's work (La France, Tip Top), making Madame Hyde one of the more eye-raising omissions from this year's festival. 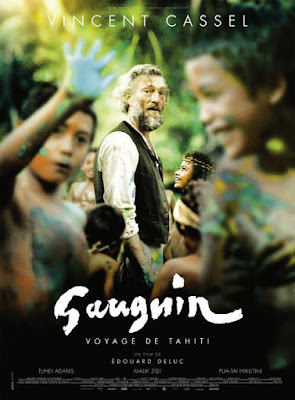 As someone who obsessively follows contemporary French cinema, I was surprised to draw a near-complete blank when it came to the rest of this year's SFFILM Fest French line-up. I knew that Janus Films had done a new 4K restoration of Olivier Assayas's fifth feature, Cold Water (1994), so that was nice to see. If you can't make the fest's one-time screening (like me) I'm sure Janus partner Criterion Collection will be releasing it soon enough. I was also clueless that actor Vincent Cassel had made a Gauguin biopic (Gauguin: Voyage to Tahiti). I'll basically see anything this actor appears in, especially when it has a South Seas setting and is screening in our fabulous Dolby Theatre. It turns out the film was put into French cinemas last fall without the benefit of any festival exposure. The few reviews out there praise Cassel's performance, but come down hard on its toying with biographical facts. Gauguin: Voyage to Tahiti is slated for a local Landmark Theatres release on July 27. 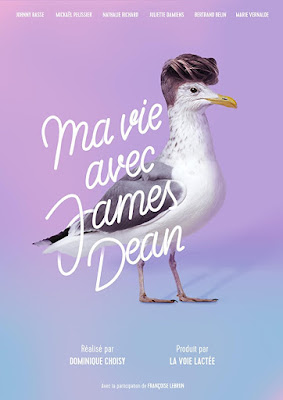 Animation fans will no doubt be excited to see The Big Bad Fox & Other Tales, a new cartoon feature from Oscar®-nominated director Benjamin Renner (Ernest & Celestine). Based on the trailer alone, Marine Francen's The Sower comes off as a pastoral bodice-ripper, but her New Director's Prize from the San Sebastian Film Festival is a hopeful indicator of it being better than that. Out of all these unknown French entities, I'm most looking forward to My Life with James Dean, Dominque Choisy's slapstick valentine to the passion of cinema. Johnny Rasse stars as a gay experimental filmmaker who has a number of amusing encounters as he exhibits his latest film along France's Northern coast. SFFILM Festival will host the movie's North American premiere, with director Choisy expected to attend.