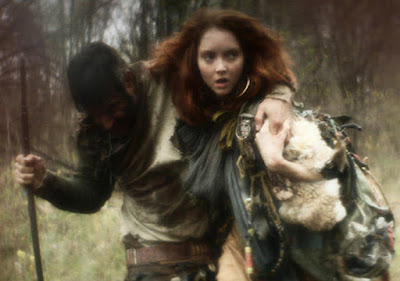 Orion (2015, USA, dir. Asiel Norton)—As a follow-up to his 2009 art-house western Redland, Asiel Norton has spent the last few years conjuring up a dystopian fairy tale set in a devastated post-apocalyptic world that resembles the medieval dark ages with its ruthless, unrelenting survival of the fittest. In other words, civilization has taken a giant step backward, the reign of misapplied science is over, and arcane magic prevails. Using divinatory cards to chapter his narrative structure towards traction, Norton guides us into an intricately-structured universe where an evil mage, a hunter, a pregnant virgin, a fool, and a wretched scapegoat are the quintet that set prophecy into motion. The archetypal strokes are broad but uniquely personalized in Norton's interpretive myth of the eternal return, which hailed its World Premiere on August 1, 2015 at the 19th edition of the Fantasia International Film Festival. 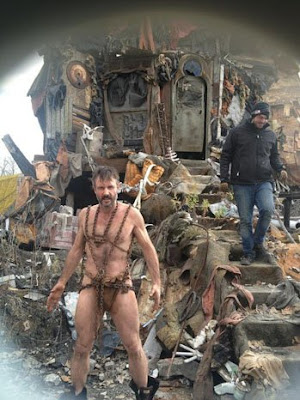 As the taciturn and troubled Hunter, or Wanderer, David Arquette is drawn by whispering inner voices to find and confront his "other side"—some synopses say his brother—who arrives in the guise of cannibalistic sorcerer (Goran Kostic) whose occult powers are bloodthirsty and formidable. Kostic not only plays a sadistic shapeshifter holding a virgin (Lily Cole) captive, but serves as associate producer on the film. The predestined conflict between the Hunter and the Mage plants the seed for the potential rebirth of civilization, which—during a solar eclipse—invokes the reanimating spirit of Orion to descend upon mankind. Christian imagery rears its head with predictable passion. Sure, there's a bloody crucifixion, but more importantly there's a pregnant virgin being led on a donkey into what can be conceived as the New Bethlehem where the world's last remaining survivors reside. The divine child is conceived as endendros, the life at work in the tree, Hellenistic Christianity in pure force, whose green sapling growing among the demolished remains of the old world approximates the spiritually redemptive imagery of Tarkovsky's wastelands. 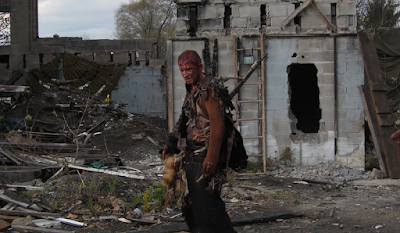 In full disclosure, unable to attend the World Premiere, I watched a streaming link of Orion absent vital post-production, so am unable to comment on such technical credits as the film's cinematography, etc., although T.K. Broderick's percussive score is significant and strong, securing tension when action requires, while evoking long ago eras, not only medieval but Amerindian. Norton's skillful melding of the near-future with the ancient past judiciously converts the delapidated factories of Detroit into civilization's last stand. At Film Independent, Jennifer Kushner talks to Norton about his vision for the film. World Premiere. IMDb.
Posted by Michael Guillen at 8/04/2015 04:52:00 PM