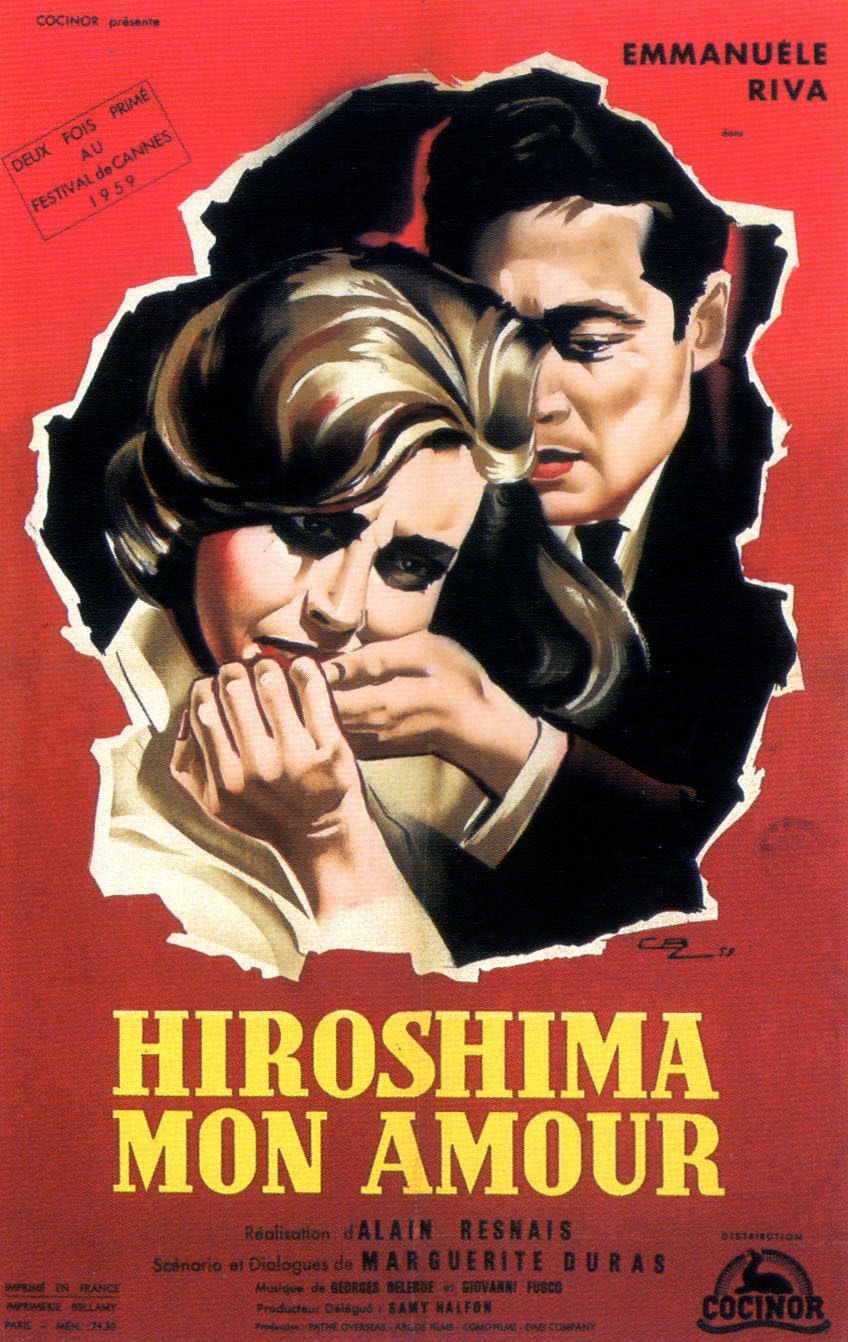 It rises back up, like a ghost. Appropriate that the movie is being re-released to theatres on Halloween, a perfect date for a movie as haunted as Hiroshima Mon Amour (1959). Alain Resnais' landmark film (from a script by novelist Marguerite Duras) was considered by some the first truly modern movie of the sound era. Originally commissioned to create a documentary on the atomic bomb, Resnais opted to instead confront the subject's weighty history through fiction. (He had earlier captured some of the anguish of the Holocaust in his poetic, terrifying short documentary Night and Fog, and some of that movie's strategies are deployed in Hiroshima).

The movie's unsettling first reel takes in sights, footage, and artifacts from a museum erected in Hiroshima to commemorate the bombing. Over this harrowing travelogue we hear a conversation between two people, whom we figure out are a French woman (Emmanuelle Riva), who is confronting the horrors of what happened at Hiroshima, and a Japanese man (Eiji Okada) who gently but implacably insists that she has seen nothing. The movie then seems to switch its focus on the affair between these two figures, a French actress in town to shoot a historical war drama and a Japanese architect who has his own memories of the war. 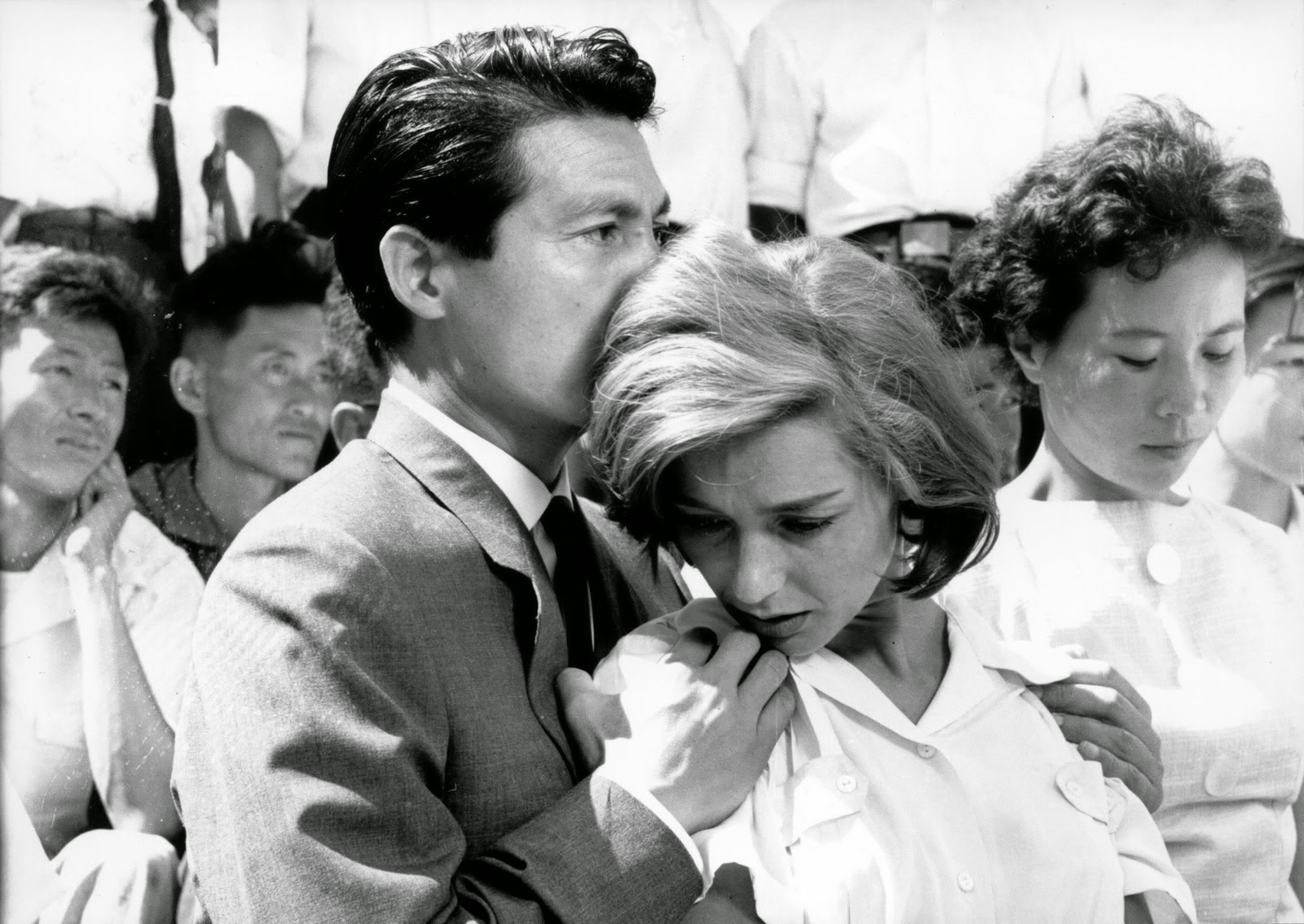 Both are married with children. Both are scarred by their experiences during the real war. Both are defined by that pain, and to a degree isolated by it. And so the story never really loses its initial focus on the horrors of Hiroshima; Duras and Resnais artfully speak to the unknowability of such horrors by juxtaposing it with the unknowability of a foreign lover. Duras cannily uses the enormity of the pain embedded deep within Hiroshima to outweigh the immorality of her characters' affair, allowing us perhaps to engage their affair at a remove. This remove lets us empathize more deeply with their longing for one another, joining us to them at the heart. Too many movies about similar subjects attempt to make us see them through their characters' eyes; Resnais, Duras, Riva, and Okada instead let us truly feel the pain, the weight of history. 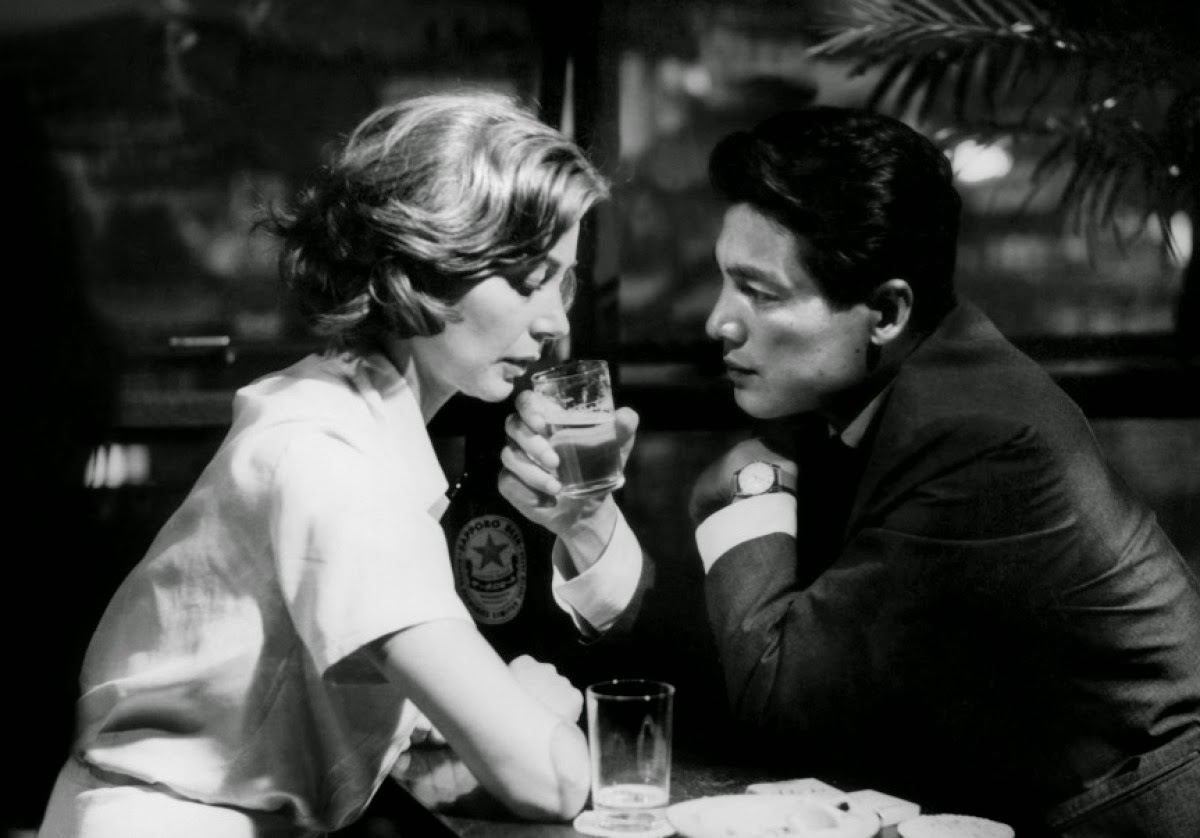 And so this intriguing, compelling, often confounding, and ultimately timeless motion picture has been caught in another moment it couldn't have anticipated. It feels necessary to mention that this iconic film has been resurrected in a new digital print. At least one critic I know who has seen it lamented yet another classic movie released in a new, bad DCP. And yet he quickly pointed out that few seemed to understand what a bad DCP was, confessing that the distinction often eluded him as well. From my own perspective I recall seeing many worse digital prints of more recent movies. I recall that Hiroshima's still images were crisply rendered, with some of the movement within those images a bit blurred, pixilated (as is sometimes the case with new digital transfers). And yet I recall nothing about the visual presentation keeping me from being absorbed in the movie. Indeed, I noticed immediately that the movie sounds absolutely stellar, with the digital wash bringing a gorgeous clarity to the accumulated music of Duras' dialogue, Riva and Okada's voices, Giovanni Fusco's score (a piano piece in the film's aching final third struck me as one of the loveliest pieces of music I've ever heard in a movie). In a movie that puts so much weight on its music and sound design, the clarity this DCP brings to those aspects should not be overlooked in a perhaps knee-jerk movement to condemn its medium. 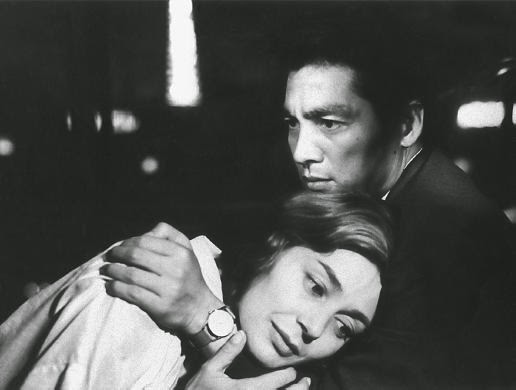 It is entirely possible that the new format, and the potential ubiquity it offers Hiroshima Mon Amour, will put it before the eyes of a larger, younger audience not as invested in issues surrounding the ongoing film-vs.-digital debate. I don't doubt someone will suggest that the movie's new format will add a layer of obfuscation to the issues already permeating the movie of capturing that which is unfilmable, be it the terrifying reality of nuclear war or the deep, singular pain carried by all of us. I'm hoping that the re-release will allow a new audience to discover the movie; to be carried into its mysteries, and see its own pain, longing, and identity reflecting back, as always, from this still-singular movie.

Hiroshima Mon Amour opens Friday, October 31, 2014, at the Vogue Theatre, 3290 Sacramento St., S.F. (415) 346-2288. David Robson holds a degree in theatre from the University of Virginia. He is the editorial director at Jaman, a website that offers a smarter search for new movies to watch on line. David blogs irregularly at the House of Sparrows, but is often too busy seeing movies to write about them.