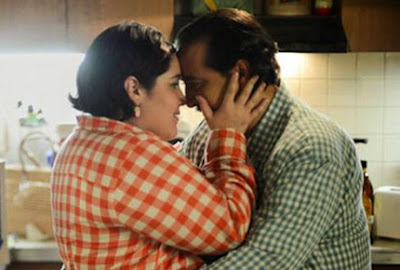 Situated in FICM’s Mexican Feature competition, Mariana Chenillo’s Paraíso (Paradise, 2013) cooks up a delectably sentimental offering, albeit from a slim premise. Carmen (Daniela Rincón) and Alfredo (Andrés Almeida) have been childhood sweethearts since secondary school, living sequestered and happy lives in a small town, oblivious to their mutual obesity. But once Alfredo achieves a work promotion that relocates them to Mexico City—and after attending their first office party where Carmen inadvertently hears Alfredo’s workmates refer to them as “Boteros” (which, distraught, she looks up on the internet)—Carmen succumbs to the pressures of fitting into a body-conscious society. She insists they both go on a diet and join a weight loss group and—though at first Alfredo is resistant—he acquiesces, commits himself to the program, and begins to lose weight (whereas Carmen does not). As their body image shifts, so does the image of their relationship, which suffers as a result.

Paraíso is a romantic comedy, plain and simple, and its adherence to formulaic fantasy all but assures that audiences will leave the film feeling satisfied. Though it touches upon serious issues regarding the tension between self-image and social conformity, it skirts these issues effortlessly by offering the panacea we all want to hear: love conquers everything. In this formulaic fantasy, being overweight simply means there’s more to love, as cliche as that might be. One certainly can’t begrudge Chenillo for that, and audiences won’t, judging from the chuckling response from FICM’s audience.

Chenillo’s pairing of newcomer Daniela Rincón with veteran Andrés Almeida is an astute casting choice. Rincón’s naifish and sweet vulnerability makes it easy for Almeida (and audiences) to love her and Almeida’s big puppy dog eyes express his love devotedly. Almedia’s transition from a “pumpkin” to a slimmed-down bank executive is both believable and inspiring. Amusing comic support—most notably by Luis Gerardo Méndez as a slightly effeminate fitness coach, and a clutch of middle-aged women with whom Carmen takes a Mediterranean cooking class (rather than attend yoga)—allows Chenillo her light handling of the subject of Mexico’s rising obesity. An aquarium blowfish that Carmen finds beautiful for reminding her of a bird provides an interstitial metaphor throughout, balancing weight with levity. There’s all kinds of fish in the sea, after all. Chenillo raises awareness by poking fun at the issue of obesity, without actually asking for much resolution, though the film commendably—if backhandedly—celebrates culinary creativity. Carmen joins the ranks of loveable characters like Tracy Turnblad of the Hairspray vehicles, though she lacks the meaningful self-agency achieved by Ana Garcia (America Ferrara) in Real Women Have Curves. Paraíso achieves light entertainment for the guiltily overweight.
Posted by Michael Guillen at 10/19/2013 10:40:00 PM