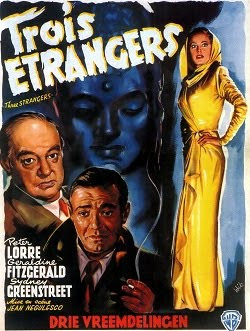 It seems like only yesterday that Noir City's shadow lengthened across the continental United States to include an edition in Chicago, Illinois, alongside its already successful traveling road shows in Hollywood, Seattle and Washington, D.C. When Eddie Muller and I first discussed the trial run in Chicago, he framed it in exactly those terms. "Quite honestly, Michael," Muller admitted to me at the time, "repertory cinema these days is not only a year-by-year thing; it's a month-by-month thing it seems. The economy of the festival circuit is such that you can't really count on anything at this point." Launching into its fourth year this coming weekend, it appears that Noir City can count on the Windy City to happily clutch its shadows close to its vest. Venued once again at the Music Box Theatre, Noir City: Chicago runs Friday, August 17 through Tuesday, August 23, 2012.

Noir City: Chicago kicks off with Jean Negulesco's Three Strangers (1946), summarized as a "fantastic tale" wherein "the verities of fate are explored", namely how the fates of three strangers entwine with a mysterious Chinese idol and a winning lottery ticket. "Deeply cynical, gloriously atmospheric, never on DVD, and almost lost in 35mm", Noir City proudly presents this forgotten classic in a brand new preservation print funded by the Film Noir Foundation (FNF). Now seemed as good a time as any to revisit Eddie Muller's introductory comments to the screening of Three Strangers in San Francisco earlier this year. 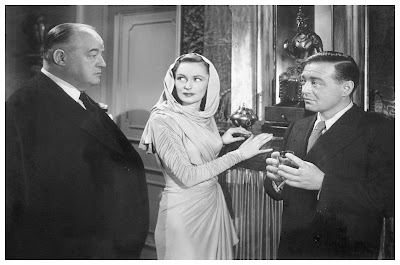 Three Strangers is a classic mid-'40s Warner Brothers production, dripping with atmosphere and mystery and one of those noirs, Muller distinguished, that's really about how you can't escape fate. "We love the noirs about people who self-destruct," he admitted, "but we also love the noirs about how fate screws you no matter what you do."

Increasingly over the years and no less at Noir City X, people have repeatedly asked Muller how the restoration of a film actually works and how much it actually costs. "There is no set answer," Muller explained, "and Three Strangers is a perfect example of that." Noting that another entry in the line-up, The Great Gatsby (1949) was at the festival "through the good graces of our friends at Universal Pictures", Muller stressed how much he cherished FNF's relationship with Universal Pictures because of the way in which they took it upon themselves to make a new print of The Great Gatsby at their costs. Things were really different at Warner Brothers with Three Strangers. Although Three Strangers was scheduled to be eventually released on DVD, there was no 35mm print of the film that was screenable. So FNF told Warner Brothers that they would actually pay for a new print because of the success of Noir City, and the big audiences they've drawn in San Francisco and four other cities, where the ticket revenue from these screenings will actually underwrite the cost of the Foundation making a new print, so that—as Muller wryly chided—"we don't feel totally embarrassed by the fact that we are paying for a print that's owned by one of the world's biggest entertainment conglomerates, okay?" 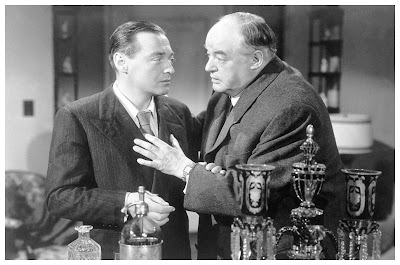 The newly-struck print of Three Strangers will reside at the UCLA Film and Television Archives as part of the Film Noir Foundation collection. The rights to the film are still owned by Warner Brothers, of course, but Muller thanked Ned Price who runs the archives at Warner Brothers for graciously allowing the deposit of original materials at UCLA so that a new print could be struck. "What you are seeing today is the second answer print of Three Strangers shipped to San Francisco for the Noir City X screening," Muller said, adding: "If Eddie does not approve of this print, there will be changes made."

The exquisite program guide to Noir City X—a collector's item, if ever I've seen one—offered the following trivia with regard to Three Strangers: "John Huston wrote the original story for Three Strangers in the mid-1930s, predating his film of The Maltese Falcon, but not Dashiell Hammett's 1929 novel. Huston wrote in his autobiography, An Open Book, that the inspirations for the story were a wooden Chinese figure he had purchased in an antique shop and a discussion he'd had about Irish Sweepstakes tickets.

"Sydney Greenstreet and Peter Lorre costarred in nine films. Greenstreet was known as the 'Fat Man', Lorre as the 'Little Man,' and they typically portrayed characters different in the extreme, much as they were: Greenstreet was larger than life, cynical, and dignified, occasionally jovial; Lorre was nervous, serious, and occasionally devious. 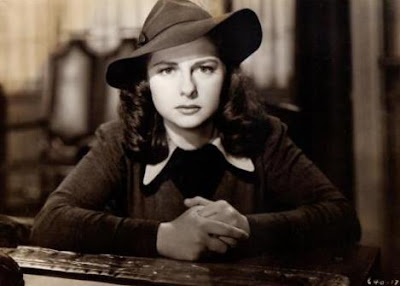 "Joan Lorring (Icy Crane) was born Mary Magdalena Ellis in Hong Kong but was forced to flee with her family to San Francisco during the '39 Japanese invasion. She found work on the radio in Los Angeles, which quickly led to movie roles including a Best Supporting Actress nomination in 1945 (at age 18) for The Corn Is Green, opposite Bette Davis. She reappeared with costars Greenstreet and Lorre in 1946's The Verdict."

Of related interest: In his essay for Turner Classic Movies, Jeff Stafford describes Three Strangers as "an atmospheric melodrama with film noir shadings." At her site Self-Styled Siren, Farran Smith Nehme gives good thought to applying an auteurist lens to the career of Jean Negulesco. PopMatters says of Three Strangers: "Life as a gamble and a shell game, a world of fate and superstition misread as destiny by those who project their obsessions and character across its face. As for the overall darkness of its vision, well, what can be said about a movie in which Lorre plays the most sympathetic character?" Movie Legends has a great photo gallery, from which the bulk of images for this entry have been taken.

Muller introducing the film at the Seattle edition of Noir City, notable for his ever-eloquent defense of 35mm restoration and preservation: