ARGENTINE CINEMA: AT THE EDGE OF THE WORLD—A Few Evening Class Questions For Lisandro Alonso

Adam Sekuler, Program Director for Seattle's Northwest Film Forum (NWFF), organized the retrospective "At the Edge of the World: the Cinema of Lisandro Alonso", which ran this past week November 11-19, 2009. All four of Alonso's films—La Libertad (2001), Los Muertos (2004), Fantasma (2006) and Liverpool (2008)—received their Seattle premieres and Alonso was present to introduce the films and conduct Q&As afterwards. He likewise led an intimate afternoon "master class." 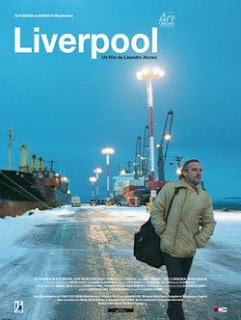 In his write-up for The Stranger, Sean Axmaker emphasized: "In addition to putting together this Seattle series, Northwest Film Forum has taken up the mantle of distributor for Liverpool in the United States." At Parallax View, Axmaker elaborated: "Liverpool was heralded at both Cannes and Toronto from 2008, proclaimed 'one of the best undistributed films' by both indieWIRE and Film Comment, and 'Best Film of 2008' by Cinema Scope, yet no distribution was forthcoming. So Adam Sekuler and NWFF stepped in to arrange a fifteen-city tour of the film, essentially taking the distribution of the film as a not-for-profit undertaking and expanding the concept of nonprofit film organization." Along with Axmaker, I say, "Kudos to the Northwest Film Forum!"

Lisandro Alonso and I first met at the 2008 Toronto International Film Festival where I interviewed him in connection with TIFF's screening of his fourth feature Liverpool. He reminded me of a wily but friendly fox and his long, dark hair recalled me to my own as a young man. Our exchange was pleasant but Alonso chided me gently at the end of our conversation for not speaking to him in Spanish. I took this criticism to heart and have worked on my Spanish since then. Alonso and I reconnected this past week in the lobby of the Northwest Film Forum where he recognized me from Toronto and came up to shake my hand. I had the chance to practice my Spanish with him, and he was visibly pleased.

Alonso was equally pleased when I told him that—since catching Liverpool at Toronto—I've been wanting to see his first three films but could only find Los Muertos on DVD. Further, though I rented Los Muertos from Netflix, I kept it sitting on my coffee table for nearly six months, conflicted over wanting to watch it but not wanting to watch it on DVD, but not wanting to return it without watching it. Netflix loves conflicted cinephiles like me all the way to the bank! But the moment I confirmed my flight to Seattle, I returned Los Muertos to Netflix; conflict resolved.

I am most appreciative to Glenn Fox for alerting me to the retrospective and to Adam Sekuler, Dave Hanagan and Ryan Davis of NWFF for encouraging me to attend and for being so accommodating once I arrived. Adam was particularly affable; I never once saw a smile leave his face nor mirth desert his eyes. A cursory review of recent and upcoming events at the Northwest Film Forum confirms that he has done fantastic and important work for the organization.

One particularly exciting aspect of Alonso's NWFF residency is that—per their one-shot film commission series—Alonso agreed to participate and make a short film for the Forum. He was, in fact, scouting for locations just outside of Seattle the day I arrived. He had wanted to make a film about a Northwest hunter but couldn't find a hunter willing to cooperate so, instead, Alonso noticed some horses and decided he wanted to make a film about horses. The morning they were scheduled to shoot, it began to rain; but, for Alonso the rain was a perfect combination with the horses. He and his camera man got the horses positioned just as they wanted them and then the film jammed in the camera. In the process of going back to the car to reload the camera, the cinematographer accidentally left the gate open, which brought the rancher yelling out of her house, kicking them off her land; but, not before Alonso negotiated his one-shot. I wonder where and when this film will show up? It's something to anticipate, given Alonso's frequent statements throughout the retrospective that he is planning to take a break from making films. I'm grateful he and I had numerous opportunities to talk throughout his stay in Seattle, albeit in bursts and spurts. This "conversation" is cobbled together from an ongoing one over the course of several days.

When I asked Alonso what he thought about his movies being more popular internationally than at home, he smiled: "I've often felt that I dance with more beautiful women outside of Argentina than within."

When I asked him why that is, he offered that Argentines are, perhaps, accustomed to the images of labor he depicts on screen. They tend to focus more on his films' structures and his cinema language. In Europe and the U.S., however, the labor has become somewhat exoticized and, thereby, perfect for the film festival circuit where vanishing modes of labor are a popular thematic concern.

The achievement of Los Muertos, what constitutes its stern beauty, is the aesthetic tension between Alonso's calm, observational camera, its sinuous and fluid movement, and a perceived sense of menace throughout the film, a withheld violence. I asked him if he intended this tension or if I was reading too much into the film? Certainly, Alonso responded, he and his camera man sought a rhythm to the film. Perhaps they achieved it? Yet, most of the time Alonso needs his audience's help to make the movie better. "It's better for all of us," he asserted. "If you use my film and work with your own ideas and your own imagination, that's what cinema is about." I complimented him for creating that space for us as an audience.

I asked how he kept his camera so steady moving through the foliage and down the waterways? He said they built a platform over two boats and floated down the river after Vargas who had an assured mastery over his boat.

I asked him to speak about his films' sound designs and music scores. Alonso replied that the sound designer for all his films has been Catriel Vildosola. Flormaleva is Vildosola's band. Vildosola has been entirely involved in each of Alonso's projects from their onset through post-production. From the moment Alonso begins talking about an idea, and then seeks the financing, and then goes to shoot the film, Vildosola is involved. He listens to Alonso's ideas (or sometimes not). For a while, before he began making films, Alonso was a member of Flormaleva, playing maracas (which he admitted added little to the act).

After he finished filming Fantasma, Alonso asked Flormaleva if they could create music for the film? They asked him what kind of music he wanted but he answered, "I don't know." But because they were thoroughly familiar with Alonso's ideas, having entertained them from the very beginning, they were able to create the music.

Sometimes Alonso had ideas about what kind of music should or should not be used. For example, he had seen a documentary on Stanley Kubrick about the making of 2001: A Space Odyssey and been impressed with the 10-minute musical introduction to the film. Though he could hardly compare Fantasma to 2001, why not? He tried to do something similar. He tried to replicate in the audience the same "What's happening? Why is this happening?" through the music. Though I had wanted to take Alonso out for manhattans at the Grey Gallery & Lounge—and he expressed his willingness to do so—the opportunity never arose because he was so embraced by his audiences. To complicate timing, I had to race off after each evening's screening to catch the bus to my host's home.

One social gathering that I much enjoyed, however, was dinner with Adam Sekuler, Dave Hanagan, Jonathan Marlow, Glenn Fox and Jay Kuehner (whose Parallax View entry cross-published at Hot Splice is quite commendable). Adam had already expressed to me that—contrary to my opinion—he didn't consider James Quandt's "Ride Lonesome" essay on Alonso the best out there. [Decide for yourself: Quandt's essay is now available in a condensed edit at the Cinematheque Ontario website as introduction to the cinematheque's own upcoming retrospective "Ride Lonesome: The Films of Lisandro Alonso", running November 27 through December 1.] Jay Kuehner began pursuing the notion that Alonso's protagonists were comparable to the anti-heroes of Hollywood westerns but Adam stopped him short, stating firmly that the only comparison between western anti-heroes in the Old West and Alonso's characters was their placement in wilderness, nothing more, and hardly enough to warrant such an equation. I found the difference of opinion fruitful. How wonderful that such lean cinema should produce such diverse commentary!

In preparation for the retrospective, Adam compiled an expert primer on Alonso for the Northwest Film Forum's blogsite Hot Splice, expanding upon Harry Tuttle's invaluable efforts at Unspoken Cinema.

Sounds like such a fruitful trip, Michael. Los Muertos has been one of those films that I didn't know quite what I thought of when I first saw it at the SFIFF, but it's been reverberating in my mind for the five years since. It's high time for a rewatch. I was so thankful to catch Liverpool when its distribution tour brought it to Yerba Buena a few months ago, and I hope Bay Area cinephiles get opportunities to see his other films that have never played here sometime in 2010.

Hey, Brian, Happy Turkey Day!! Thanks for stopping by to gobble with me. Heh.

Los Muertos is my next write-up. What an interesting film, made all the more so by the interpretations foisted upon it by those who see Vargas as a serial killer.

Have a great day!