TIFF09—IN THE FORESTS OF THE NIGHT

Tyger! Tyger! burning bright
In the forests of the night,
What immortal hand or eye
Could frame thy fearful symmetry?—William Blake, "The Tyger"

Imagine for a moment, if you will, that the filmmaker's lens is William Blake's visionary eye, aiming consciousness (i.e., a bright and burning light) into the dark recesses of the cinephilic psyche. Five films at this year's Toronto International Film Festival seemed to inflect this conceit in manners both divergent and amazingly parallel. Whether surreal, irreal, pantheist or intimist, the forests of the night enable and reflect an alterity that counters the deceits and defeats common to the day and offers compensatory remedy. 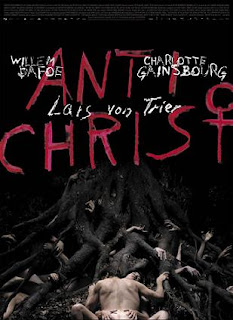 In Lars von Trier's controversial Antichrist, Willem Defoe and Charlotte Gainsbourg attempt to process their grief over losing a child by backpacking to Eden—a cabin in the woods—where the limbs of overarching branches are underlit menacingly, demarcating a fearful and uncanny realm in which recapitulations approximate ritual and all that lies repressed rises in purging rage. The ancient oaks attack and pummel the roof of their cabin with falling acorns. Gravity becomes the will of reigning chaos. Eden can be seen as fecund source, the ur-garden, the ur-forest, the original space, the illo tempore, from which exile flows. We return to this dark forest in nightmares and dreams impelled by the restless desire to recover a home from which we've been banished only to discover that by its very nature—in fact, through its extension of human nature—nihilisim permeates the phantasmagoric texture of creation. 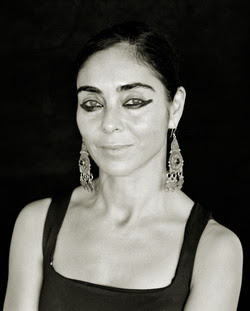 From the perspective of self-imposed exile, Iranian filmmaker Shirin Neshat has readily admitted that the orchard in her debut feature Women Without Men—adapted from the eponymous novel by Shahrnush Parsipur—serves as a refuge, albeit a place of exile, for the women in her film; a liminal space wherein they can recognize and accept themselves. In one scene specifically, Faezah is awakened from an insistent nightmare. She looks out her window and sees a woman draped in a black chador moving among the moonlit trees. Faezah pursues her and discovers the woman is her traumatized self, raped by men who followed her home from a café-bar. In a sense, facing this double wandering the dark forest of the night is the manner by which Faezah comes to terms with what has happened to her, bearing witness to her own survival, and her capacity to confront a memory forcibly repressed. The night orchard provides safety for her to heal where she has been ruptured. Neshat writes: "The concept of the garden has been central to the mystical literature in Persian and Islamic traditions, such as the classic poetry of Hafez, Khayyam and Rumi where the garden is referred to as the space for 'spiritual transcendence'. In Iranian culture, the garden has also been regarded in political terms, suggesting ideas of 'exile', 'independence' and 'freedom.' " 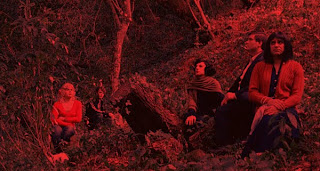 As a comparable place of exile and refuge, the night orchard of Women Without Men resembles the night forest in João Pedro Rodrigues' To Die Like A Man where transgendered men and women pause to listen to Baby Dee's "Cavalry" under the carmine stain of an eclipsed moon. Rodrigues admitted when we discussed his film that he was unaware that in mythic literature the lunar eclipse is a frequent symbol of the gynandrous marriage of male and female (where sun/masculine and moon/feminine occupy the same space); an apt inflection for transgendered experience. 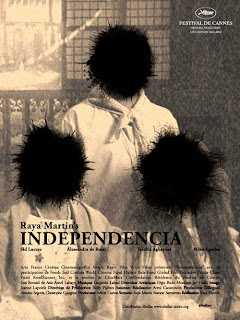 Also listening expectantly in the dark is Miguel (Sid Lucero), the son in Raya Martin's lustrous Independencia who—crouched still with vigilant eyes—hears the sounds of war approaching within a raging storm that ravishes the Philippine rain forest. The wet foliage—as Joni Mitchell phrases it—"looks like slick black cellophane" and as if to emphasize the film's irreality, Martin purposely employs theatrical devices and fabulist artificiality to emphasize not only the history of his country, but the history of his country's cinema. Martin describes Independencia as "an intimist film in the woods." 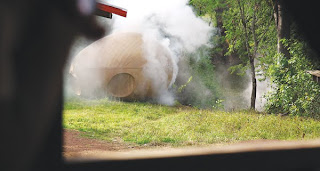 And, of course, no mention of the forest at night can exclude the dilated visions of Apichatpong Weerasethakul whose breathtakingly beautiful short film A Letter to Uncle Boonme was featured in TIFF's Wavelengths: Une Catastrophe program. In one especially mesmerizing sequence, the camera cranes upwards through moon-laced jungle foliage towards a starlit sky interrupted by an unexpected migration of night birds. Insights take flight from Joe's wind-disturbed canopies.

Though I intend to write about all of these films more fully, for now I am contemplating cinema's suggestion that the fearful symmetry of the psychic night can be framed at 24 frames a second, either staged as artifice or documented as the "real", whether in the Mideast, in Southeast Asia, or the Portuguese woods. The animals that wander these dark cinematic forests might be none other than ourselves; their cries of sad and painful recognition, our very own.

Did you see Nymph, which also takes place in a forest? Nobody I know who covered TIFF wrote about Pen-Ek's newest film. I'm also concerned because it may suffer the same fate as Ploy by not being available on an English subtitled DVD. I'm of course also disappointed that Nymph will not be Thailand's Oscar entry, thereby denying the world of the ads in "Variety" stating: "For your consideration - Gyzby".

Hi, Peter, thanks for stopping by to comment. I purposely avoided Nymph as Pen-Ek has bored me to tears with his last two films. Until I hear some kind of critical fanfare over a recent project, he's off my list. Everyone I know who watched Nymph complained that they didn't like it. He's going to have to do better if he wants to remain in the running.