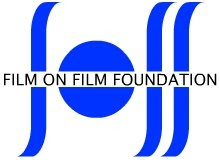 The redoubtable folks at Film on Film Foundation, dedicated to screening films strictly on celluloid, move to the Roxie Cinema this Sunday to show the very first features of Stanley Kubrick and Robert Altman. When Carl Martin announced this program at the Ida Lupino screening at PFA, a pleased gasp went up in the crowd. Although both features have been disavowed, even suppressed in Kubrick's case, by their makers, they're still fascinating looks at nascent preoccupations and budding technique in these recently deceased American masters. I'm struck more than anything else by their early and already skillful renderings of violent action. But first, the short Kubrick films. 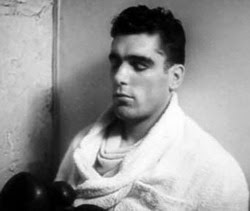 Kubrick's first short, the 1951 Day of the Fight, is 16 taut minutes in the pre-fight day of American middleweight boxer Walter Cartier, the subject of a previous Kubrick pictorial in Look magazine. Like the photos in that profile, this film foreshadows the anticipatory pre-fight tension and magnificent boxing sequence in Killer's Kiss (1955). You could even say that Kubrick's emphasis on Cartier's inseparable twin brother, with whom he sleeps and who gives him a Vaseline rub, foreshadows the doppelganger preoccupations of The Shining. I don't think it's stretching things to suggest that these films dramatize "becoming another man . . . a fierce new person"—violent creatures like Humbert Humbert in Lolita, Jack Torrance in The Shining or the soldiers in Full Metal Jacket.

Kubrick's second short Flying Padre, also 1951, is a shorter and more perfunctory profile, this time of Catholic priest Fred Stadtmueller as he flies in a Piper Cub ministering to his far-flung flock over a 4000-square-mile parish in rural New Mexico. The father, shot in heroic low angles whether attending a funeral or shooting his gun, recalls the sun-bleached iconography of films of the common people like Salt of the Earth. Otherwise it's not very interesting. 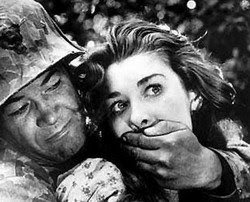 All of these films are compromised by a 1950s voiceover narration that strikes 21st-century audiences as preachy and paternalistic. The 1953 Fear and Desire, Kubrick's first feature, opens on a vista of forested mountains with a voiceover introduction that evokes Rod Serling's Twilight Zone, especially in telling us that the war happening in this landscape is "outside history. Only the unchanging shapes of fear and doubt and death are from our world. These soldiers that you see keep our language and our time but have no other country but the mind." Thus we're given plenty of warning that this war film is allegorical, maybe even metaphysical-Malick territory. 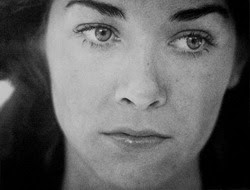 Still, violence and personal transformation take their "unchanging shapes" in this landscape. Three grunts and a lieutenant find themselves shot down six miles into enemy territory. While trying to build a raft to sail back to their brothers, the men encounter a beautiful fisherwoman and an enemy general whose death would be a glorious redemption for one frustrated sergeant. The grotesque violence in these encounters—the woman tied to a tree by the men's belts, a dying hand squeezing the spilled contents of a stew, another character clawing the floor as he drools his last—is far more memorable than the muttered allusions to The Tempest or whatever higher meaning Kubrick may have wanted to invoke in this story. A standout is the earliest, if not exactly successful, example of Kubrick's many portrayals of psychopaths (Paul Mazursky in a toe-curling cringefest of a performance). Curiously, Kenneth Harp plays double roles as the lieutenant and the enemy general. 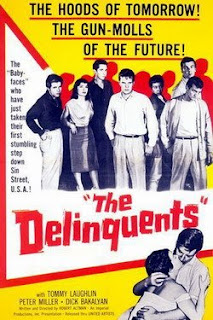 There's more than one baby psycho in Robert Altman's first feature film, the low-budget The Delinquents (1957), set in Altman's hometown of Kansas City. After a sequence in which Cholly's underage gang wreak havoc in a bar, the voiceover narration helpfully tells us, "The story you are about to see is about violence . . . teenage violence"—an immensely popular exploitation obsession during the 1950s. Released two years after Rebel Without a Cause (with which it has many common plot turns), The Delinquents gave Tom Laughlin his first starring role in a film long before he achieved fame as the star and director of the "Billy Jack" films (and lesser fame as a 2008 presidential candidate). 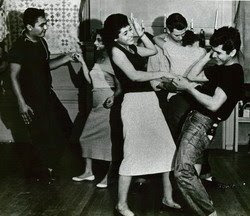 One interesting Altmanesque feature of the film is the semi-vérité views of a drive-in theatre and a party in an abandoned house. But it's Laughlin who is most worth watching here, as the decent young high school senior rejected by the father of his straitlaced girlfriend just for going steady. In his vulnerable state he's tricked into joining Cholly's gang and then must rescue his kidnapped girlfriend after a bout of forced drinking. Laughlin and Altman didn't get along; apparently the star was difficult and did the last half of the film under protest. But his performance is explosive and reminds me of his later persona as a half-Indian hapkido artist. Over the course of the film he moves from pained stoicism to unsettling violence, attaining awesome JD mayhem in a kitchen brawl displaying his transformation into another "fierce new person" thanks to the brutality that surrounds him.

Oh, fun. Nine years ago, right after Kubrick died, I attended a small, sold-out screening of all of his early films (these three and The Seafarers) at the Library of Congress. The film librarian told us the story of how they'd discovered the print of Fear and Desire among a large and dusty collection of films they'd received from Puerto Rico, if I'm remembering correctly. The only reason the print still existed was because Kubrick didn't know about it. No one did. I think my cinephilia was officially born that afternoon -- the excitement of a rare discovery.

I'm impressed that Fear and Desire is getting a public screening. Maybe Kubrick's death has made a difference. The film was to be shown at the Museum of Modern Art in NYC as part of a Kubrick retrospective coinciding with the release of Barry Lyndon, but Kubrick pulled the film from the schedule.

Great anecdote, Darren, and supplemental info, Peter; thanks to both of you for stopping by to comment.