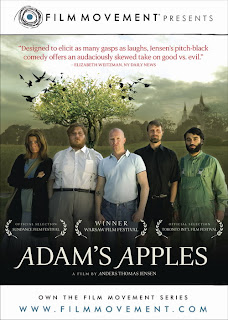 I watched Danish director Anders Thomas Jensen's third feature Adam's Æbler (Adam's Apples)—Denmark's candidate for the Oscar nominations for best foreign film—on the recommendation of my assigned publicist intern Peter Galvin, to whom I'm most grateful as I enjoyed the film very much. Its genre-mashing and "decidedly twisted parody of spiritual redemption melodramas" seemed a heady blend of "sly religious parable", supernatural thriller and morbidly funny black comedy. It's the Biblical story of Job where the Whirlwind cracks jokes.

Adam's Apples has been well-synopsized by various festival program capsules, including the write-up for San Francisco by Steve Mockus, who describes Adam's Apples as "the pitchest of black comedies," and a wickedly funny film that "reverberates with profane dialogue, appalling behavior and strategic use of the Bee Gees." Steve Gravestock, previewing the film for last Fall's Toronto International Film Festival, writes: "Setting the virtuous preacher against the unsalvageable reprobate, Jensen pushes the framework of this sub-genre and constantly tests our sensitivities. Adam may be pure evil, but he's the only tenant of the church who has a passing relationship with reality—and we're often as appalled by Ivan's demented take on things as Adam is. Ivan's deranged optimism isn't just ludicrous, it's dangerous." The Internet Movie Database review likewise queries if Ivan's denial of evil is more dangerous and irresponsible than Adam's evil—but realistic—attitude? 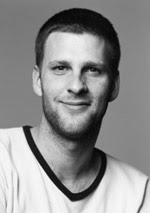 Catching Adam's Apples at Toronto, Todd Brown favorably reviewed the film for Twitch (relieving me of the immediate responsibility). "As you might expect from the title," Todd writes, "Adam's Apples has some rather metaphysical leanings tied in to the normal Jensen blend of existentialism, absurdism, and jet black comedy. While he has flirted with religious ideas in the past with Adam's Apples Jensen moves well beyond batting eyelids at the spiritual and goes ahead and invites God home for a drink or two while he slips into something more comfortable."

"But what do you make of a film," Todd continues, "that clearly takes the existence of God seriously but which casts the only true believer of the lot as a man with some serious mental health problems? . . . Adam and Ivan stand as polar opposites at the beginning of the film, a true Yin and Yang. Ivan has deliberately blinded himself to the presence of evil in any form. Adam has utterly rejected goodness. Both are living half a life and need the knowledge the other has to truly become whole. Ivan needs to be broken down and accept the reality of his life and history while Adam needs to realize that there is truly good in the world and that [] goodness does not equate to weakness." 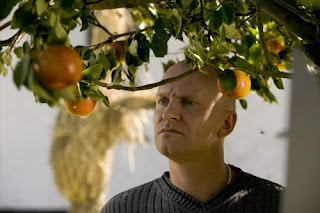 When Adam's Apples screened at Sundance, Kim Voynar reported to Cinematical: "Is there a constant battle between good and evil? Does the Devil test our faith? And is it possible for one man's faith to change another man's heart?" Voynar notes that these questions are at the heart of Adam's Apples but that the "underlying question is whether it is actually evil for Ivan to be living in this state of total denial of reality, and if he should be forced to see the truth, even it it means sacrificing his life in the process."

"Blind rage meets blind faith," states the program capsule for the 2006 Bangkok International Film Festival, "so whenever Adam throws a punch, Ivan turns the other cheek." 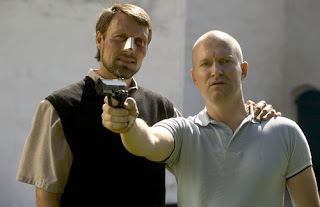 Film Threat's Pete Vonder Haar notes that Jensen "somehow manages to maintain a sense of humanity and impart an almost touching quality" to the film despite "savage beat-downs, haphazard gunplay, and extreme cruelty to animals," let alone jokes about rape, incest, and Down's Syndrome. "This isn't easy," he reminds us.

Arriving in San Francisco with a glowing trail of festival accolades, Adam's Apples is already a big box office hit in Denmark. The film has been sold to 15 countries and Meg Hamel reports that it has picked up a handful of Robert Awards (Denmark's national film awards), including Best Film and Best Screenplay. 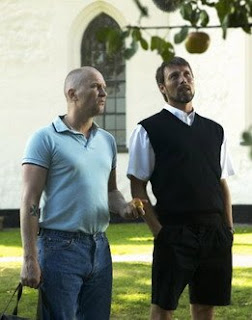 Writing for Variety from the Brussels International Fantastic Film Fest, Leo Barraclough reported Adam's Apples scored a triple triumph, earning the Golden Raven for Best International Feature Film, the Pegasus audience award, and the Silver Méliès d'Argent award for Best European Feature Film, which places Adam's Apples in the running for the Méliès d'Or Award, to be handed out by the European Fantastic Film Festivals Federation at the upcoming 10th Méliès d'Or Ceremony held at the Espoo Cine International Film Festival in August 2006. 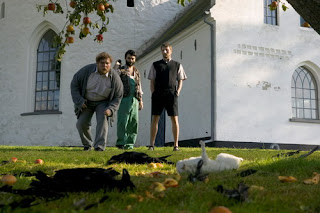 Having watched Adam's Apples on screener tape at home, I was glad to read Michael Fox's report to SF360 of the festival audience reaction: "Adam's Apples prompted a steady cascade of chuckles from its absurdist opening sequences. But, incredibly, the nearly full house exploded in laughter at crows being shot out of an apple tree. (The rim shot—a cat meeting the identical fate two beats later—got just a slightly smaller laugh.) Was I really in politically correct San Francisco, where the onscreen depiction of littering can evoke boos and muttered demands for the director's head? Yes, indeed, which should be giving the Danish provocateur a big chuckle himself, wherever he may be."

Adam's Apples was presented at 2006 SFIFF in association with Nordic 5 Arts which since 1993 has periodically been presenting films from Denmark, Finland, Iceland, Norway, and Sweden.
Posted by Michael Guillen at 5/07/2006 10:19:00 PM

I love "Adam's apples" as well.

Hey guy, thanks for stopping by. Like you I'm a little burnt out by the festival but have bookmarked your site to review your own comments in the near future. You're on your way to China?