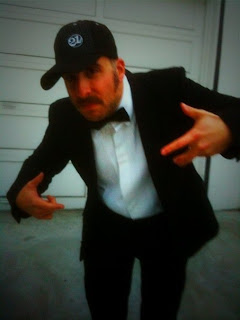 Anyone who lives in San Francisco knows that—if you are in their favor—the 7x7 guardian spirits bless you with chance encounters, broadside accidents and other romances. They love to mix it up. They'll stir serendipity into your Blue Bottle cappuccino. You'll be waiting to conduct an interview at the Larsen Associates offices on Ritch Alley, basking in one of the first warm days of Spring with—humility aside—the best-tasting coffee in town, and you'll find yourself shamelessly eavesdropping on a stranger's telecon, and all because he mentioned fried chicken and the best places in town to find it. Did you hear the sound of screeching brakes? Me and fried chicken go way back. I can do without a comfort animal but don't deny me my comfort food.

So Andrew ("Please call me Andy") Samwick and I struck up a conversation and he found out I was a film journalist and I found out he was a food blogger—inspired by the film Julie & Julia, no less—and, well, that's when the 7x7 guardians started grinning ear to ear because in no time flat Andy had become a plus one at my press screenings and he began turning me on to eateries and breweries around town. His blog You Want a Knuckle Samwick! is not only a fount of hand-to-mouth recommendations; but, a sensual diary of a young man embracing his discovery of himself in San Francisco. And that's really one of my favorite stories: the youthful faces change but the old story never ends.

For those who sport with phone apps, Andy has mastered Foursquare and currently reigns as Mayor in several fine establishments around the Bay Area. So who else to turn to when curious about where to eat by which particular movie theater? In a first of guest columns, Andy takes us to Berkeley to point out where to eat and drink near the Pacific Film Archive while catching their current film program Joseph Losey: Pictures of Provocation. 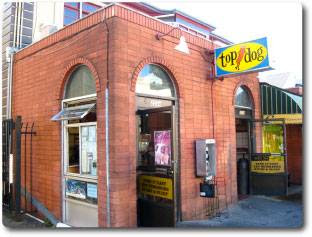 There is definitely plenty of provocative food to eat while visiting Berkeley for PFA's Joseph Losey: Pictures of Provocation. I am partial to a good sausage. And if you don't have a lot of time or money, Top Dog is quite satisfying. With three locations in Berkeley and one in Oakland, there are plenty of options. I have had every dog on the menu since I moved to California in 1996. 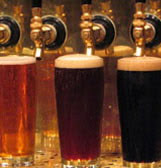 Another place I love, probably more so for the beer, is Jupiter located at 2181 Shattuck Avenue (at Center Street). I was there in February to celebrate Strong Beer Month on a rainy evening. I got some snacks while I drank through the beer menu. Their BBQ Rib Tips are smoked pork rib tips wood-fired with the choice of mild or spice BBQ sauce and are served with their house slaw. And you can't go wrong with their pizza selections. 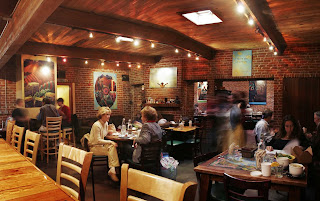 If you are looking for some healthy food options, there is a Café Gratitude at 1730 Shattuck. I love the "I Am Luscious" Smoothie. It's a raw chocolate smoothie that has hazelnut milk, figs, dates, raw cacao and vanilla. It is mighty good. The "I Am Cool Milkshake" certainly makes anyone feel confident. Otherwise known as the "Minty Chocolate Chip Shake", it has hazelnut milk, vanilla bean, raw cacao nibs and mint. When it comes to food, I always get their macrobiotic bowl called "I Am Whole." Basically, it is shredded kale, sea vegetables, quinoa, house-made kim chee and sprouts with garlic-tahini sauce and teriyaki almonds. 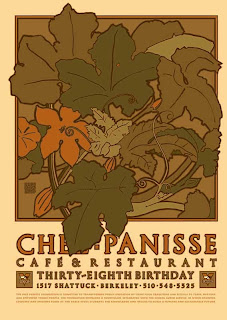 Now, if price is not an option, and you are looking for a legendary California cuisine experience, then run—don't walk—to Chez Panisse, 1517 Shattuck Avenue. Alice Waters opened her doors in 1971 and it is still one of the strongest restaurants we have going in the Bay Area. I have eaten in both the Café and the Restaurant. Most recently, last year, I had the experience of eating in the Restaurant with two of my girlfriends. The staff were so kind and inviting. They allowed us to tour the kitchen and see what goes on behind-the-scenes. The Café is also a great option and doesn't require reservations weeks in advance. I would suggest anything that highlights their access to local produce. Bob's beets, grapefruit and oranges and their current pizzetta are stunning. I should know, I spoil myself every time I go there.

The Pictures of Provocation series runs through April 16th. So, there is plenty of time to take advantage of some rare film gems and make it a great night with some suggested fare in the neighborhood.
Posted by Michael Guillen at 4/07/2010 07:48:00 PM

Over at The WELL, filmbud Frako Loden responded to Andy's entry with her own recommendations, many of which are a bit more practical for being closer to the PFA venue, often within walking distance (important for those of us taking BART to Berkeley from SF), and definitely more affordable than Chez Panisse, which—I tend to agree—is more an experience in itself than one combined with a movie. The challenge Frako relayed in finding food near PFA is that it's hard to find warm food that's quickly served. Here's what she suggests:

For food near Berkeley's south campus, here are venues that bring the food tout de suite:

Top Dog is at the top of her list as well, especially the old standby at 2534 Durant near Bowditch, when you're in a huge rush and don't mind getting mustard and sauerkraut all over you. See above.

D'Yar—Middle Eastern, at 2511 Durant Avenue near the corner of Telegraph. They have good falafel, hummus plate, kabobs, shwarma, gyros. It comes quick and it's cheap.

San Francisco Soup Company—Soup/salad, on Bancroft near the corner of Telegraph. It's quick and the portions are plentiful. There are only a few seats at the counter facing the window, but on warm days you can watch a lot of flesh cruise past.

Gypsy—Passable pasta at 2519 Durant. I like their gnocci marinara.

Blondie's—Once in a while I get a hankering for a pepperoni slice with a salad. Sometimes the salad has strawberries in it, which I love.

I've eaten at a number of the holes in the wall in the "Asian Ghetto" on Durant between Telegraph and Bowditch, but they're hit and miss. I haven't tried the new Buffet Town downstairs 2518 Durant where LaVal's used to be—reviews aren't good though. If I could find a really good Asian noodle place nearby, I'd be in heaven.

When you're not in a big hurry:

Adagia—Most of their customers are going to a concert at Zellerbach, so they keep good track of time. This is more upscale than any of the other places I've listed.

Food near the California/Shattuck Cinemas (downtown Berkeley) in a pre-movie hurry:

Cancun Taqueria—At 2134 Allston near Oxford, the first and very best choice! I love their regular chorizo burritos. You get plenty of that plus chips and spoon your own salsa from a large variety.

Top Dog—2160 Center, a last resort for me unless I have a craving.

When you're not in a big hurry:

Angeline's Louisiana Kitchen—2261 Shattuck, I love their oyster po'boys, shrimp po'boys, Joe likes their gumbo and fried catfish. Sometimes you have to wait a long time for the food to come.

Great China—2115 Kittredge near Oxford. If you can get a table here, you're in luck. Very popular place with great food. [Along with Frako, this is actually one of my favorite eateries on the way to PFA as well. I usually arrive at first seating and don't dawdle with ordering. My favorites here are their fried calamari, which is more like tempura, and their garlic-sauteed pea shoots.]

Venus—2327 Shattuck. Decent food, but give yourself plenty of time before a movie.

I haven't tried Burgermeister (2237 Shattuck, in the old Baja Fresh spot on the corner) yet—I've heard good stuff about it.

I love that you've started this new series, Michael. To me, part of the experience of watching film is the journey to and fro the film, which includes eating. For me, when I head to the PFA, my secondary pleasure is stopping in at the University of California Press bookstore to feed my mind (and empty my wallet). Since this takes up a lot of my pre-film time, I also tend to preference the quick and savory over the sit down meal. For me it's Top Dog on Center or Arinelli's on Shattuck. But Seiko and I loved that Falafel joint you took us to when we ran into you after a screening during the Oshima retrospective.

If you ever get to go to Pusan or Seoul for any of their festivals, the Kim Bap joints are a total savior for the between flick grab. It's basically cold, vegetarian sushi that you can eat in your hand like a burrito while you're running from one screening to another.

The falafel place I took you and Seiko to was a vegan eatery (imagine!) called Chick O' Peas. I need to get back there; it's been a while. I like it for their falafel burger with various spiced yogurts and sometimes just for a field greens salad.