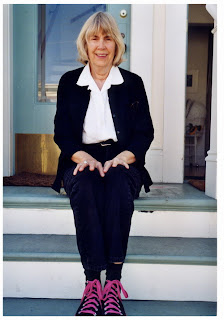 Recently when I was speaking with Don Bachardy for my Evening Class interview in conjunction with Chris & Don: A Love Story, Don described Karen Larsen as "a class act." I guess it takes one to know one. Some of you might recall that Karen Larsen, the head honcho at the publicity firm of Larsen Associates, was the individual responsible for granting me my first-ever press pass so—in effect—she was the first professional to grant credence to my efforts at The Evening Class. She has done everything in her power to further my passion for writing on film by granting me access to screenings and setting up interviews with many of her clients. Over the years I've come to think of her as not only a consummate professional but a dear friend; but—as is often the case with friends—I've admittedly taken her for granted. We talk so frequently—in person, over the phone, by email—that the notion of interviewing her seemed superfluous. However, when I read Simone Nelson's interview for Bay Area Women In Film and Television (BAWIFT), I kicked myself for not taking care of this earlier. For now, I'm grateful to Simone Nelson at BAWIFT and Karen Larsen for granting permission to reprint their conversation for The Evening Class.

* * *
BAWIFT: What exactly is it that you do as the Principal/Founder of Karen Larsen Associates for independent filmmakers, media organizations and film festivals in the Bay Area?

Karen Larsen: I do everything from consulting with an organization (a press list to CinemaTech) and sharing of press lists with organizations or filmmakers to doing publicity for festivals and opening films theatrically in order to get as much publicity—TV, radio, print—as we can for each job and strategy for PR and marketing (if it is opening theatrical vs. the festival circuit and theatrically). I do it all.

BAWIFT: How long have you been in the Bay Area and where else have you lived and worked? Have you always been in PR and Publicity and how did you get into the field of publicity and PR for media and film? 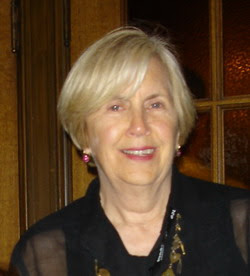 Larsen: I moved back here in 1970 from Santa Cruz and went to work at KQED on a lot of shows as an Assistant Director and PA and I also was a single mom so I worked part-time hours, did research and exhibits for places like The Oakland Museum, worked on helping cast films, and had a million freelance jobs. Eventually I worked on Over Easy on KQED as the talent coordinator and got to know Judy Stone and Mel Nobokov, which is how I got to know so many filmmakers, work for film festivals and major film distributors and studios who hired me to open films theatrically in the Bay Area. I then became the publicist at the San Francisco International Film Festival, which was then a four-month job (January through April), then Mill Valley asked me to be their publicist, Frameline hired me in their 10th year and The Jewish Film Festival and Asian American Film Festival all hired me as well.

BAWIFT: How have you seen the field of indie film and film festivals change over the years?

Larsen: The internet was a huge change. Before The Blair Witch Project, Sony used to ask me why I was letting someone be interviewed by an internet-based publication—they didn't care about that—and then they saw the success of Blair Witch Project and saw the power of the internet as a marketing tool. This week filmmaker's Wayne Wang's new film Princess of Nebraska is opening on YouTube's Screening Room. Wayne was conservative about the on-line environment but even he has changed. Theatrical festival screenings have changed (taking a cue from film festivals). They've learned that it works to have filmmakers and artists there to do Q&A. Opening a film with Q&A's by directors/actors and producers are packed screenings. Festivals are still important. The Asian American Film Festival has an unusually supportive community and audiences. I've noticed now that people go to Festivals because it's an experience, especially the Asian American, Jewish and Frameline Film Festivals locally. I've noticed a strong cultural connection with Asian/Jewish/Frameline and have literally heard people at the Jewish Film Festival say it is "their synagogue." I've also spoken to folks who come to every event at every festival and come out to these Festivals, buy full passes and treat it like a vacation. That's especially evident at Frameline, which takes place during Gay Pride Week and people come from all over the Country for the events around the Week and to attend Frameline.

BAWIFT: What would you recommend local filmmakers do in terms of marketing and promotion to help position themselves and their work in the festival circuit and beyond? And do you have any tips, dos and/or don'ts, etc.

Larsen: Do find out who a festival's publicist is and call them (not too often though) and in a very nice way offer to help, like the Going on 13 filmmakers. They email me once or twice a week and update me on what they are doing themselves for marketing and PR and what screenings are happening. They told me that they were doing the Panel Event this month for BAWIFT. Do ask if the publicist has enough of your DVDs, photos, and make sure they have your materials. Offer to send more DVDs, press kits, photos. Tell them when you are available while at the Festival; give a schedule and give helpful details. Offer to do more and give more packets, postcards, posters, clips, info, DVDs, etc. so the publicist doesn't have to keep getting or copying more. Know how to make a press kit (and make sure your information is all email-able and downloadable). What publicists generally don't like is when a filmmaker calls over and over; especially if they are one film in a big Festival and the publicist is representing that Festival which has over 200 films. There just isn't enough time to focus so much on only one film so know the appropriateness of your calls and questions!

BAWIFT: What do you like most about the work that you do?

Larsen: When connections get made. For example, a young filmmaker named Arturo Perez made a film called Where Have the Flowers Gone? about a 20-year-old coming out to San Francisco in search of the 60's culture and sensibility. He got my name from another local filmmaker Luke Wolbach (Row Hard, No Excuses). Arturo created his own press kit and already had some internet presence but for a small fee, I offered to send an "e-blast" on his behalf. From that one e-blast, he not only got a story in the Chronicle but West Coast Live wanted him on the Show. He had done his part and made a nice press kit. I love that and he is so appreciative.

BAWIFT: What are the general fees or costs to work with you?

Larsen: I offer organizations, companies and people individual hours-long consultations with complete press lists and a walk through and complete analysis of the lists and what needs to be done for approximately $500. I also offer $100 an hour consultations to individuals and charge a small fee for just the use of my press lists.

BAWIFT: Any favorite moments or people from your years in the industry and what's your favorite type of films?

Larsen: My favorite filmmaker is Wong Kar-Wai as his films are so romantic. Unfortunately I haven't met him but I did have Tony Leung here on interviews. I was really fond of the actress Amy Adams (June Bug) as she was so lovely on interviews and recently I had Charlie Kaufman on interviews. He's shy and I was worried but he was really nice. I'm also really fond of the director Errol Morris and have had him on interviews about four times over the years. I admire his work greatly. One of the highlights of my professional career was getting to go to the Academy Awards for the 1990 film Berkeley in the Sixties as I did the PR nationally and internationally for that film. The filmmaker, Mark Kitchell, was nominated for an Academy Award for that documentary and invited me to join him. Unfortunately, the film didn't win that year but it was exciting to be at the Oscars with him.

Thanks for this interview, Michale. See what I have been missing for going Asia for a month? :) I am catching up now....

Welcome home, Tony! Your smiling face has been missed.