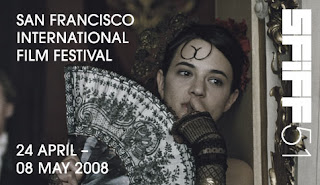 Oh sure, on the outside Michael Hawley is pretending to be calm, cool and collected about the upcoming 2008 San Francisco International Film Festival ("SFIFF"), methodically massaging the press releases to date while—allegedly—patiently awaiting the press conference announcement of the full line-up; but, he doesn't fool me. He's a candidate for meds. Trimming this year's wish list down to 20, April 1 will tell all. In the interim:

* * *
SFIFF turns 51 this year, and Bay Area cinephiles are chomping at the bit to learn how the festival will follow up last year's golden anniversary bash. Patience, patience … all shall be revealed at the official press conference next Tuesday, April 1.

But if you're a SF Film Society member, you won't have to wait nearly that long. For the second year in a row, the festival is making its full line-up available to Film Society members four days before the press conference. Beginning Friday, March 28, members will have the opportunity to view the program and purchase tickets on-line. Membership does indeed have its privileges, not the least of which is the chance to buy 10-ticket CineVouchers for $80 (representing mega-savings over this year's $12.50 general admission price).

Over the past month the festival has been revealing bit and pieces of this year's line-up. So to begin The Evening Class coverage of SFIFF51, here's a recap of what we know so far, plus a bit of wishful thinking/speculation over what the rest of the program might have in store for us:

* Catherine Breillat's The Last Mistress starring Asia Argento will open the festival on Thursday, April 24. This is a ballsy, welcome choice.

* The festival will close on Thursday, May 8 with the West coast premiere of Alex Gibney's (fresh off an Oscar win for Taxi to the Dark Side) Gonzo: The Life and Work of Hunter S. Thompson. It seems this is only the second time in the festival's history that a documentary has served as opening or closing night film (the other being Amazonia: Voices from the Rain Forest, one of three opening night films in 1991). 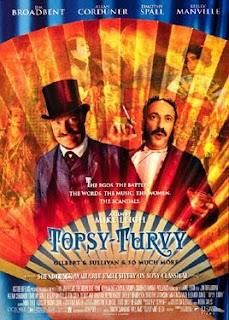 * The festival's annual directing award gets another name change (now called the Founders Directing Award) and will be presented to Mike Leigh in a program to include clips, an on-stage interview and a screening of Topsy-Turvy.

* This year's Centerpiece event will be a screening of Jonathan Levine's Sundance hit, The Wackness, starring Ben Kingsley.

* Black Francis, aka Frank Black of the rock band The Pixies, will perform his newly composed score for the 1920 German expressionist silent classic, The Golem. 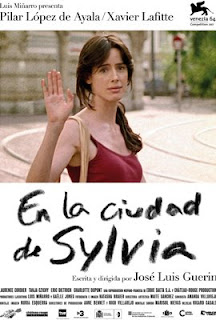 * Venerable film critic J. Hoberman will receive this year's Novikoff Award and present a screening of Jose Luis Guerín's acclaimed In the City of Sylvia. This film, which topped SF Bay Guardian critic Johnny Ray Huston's 2007 Top 10 list, actually screened last week at the local Tiburon Film Festival. On behalf of those unable to attend that single North Bay, mid-week, late-night screening (myself included), a thousand thank-yous to the SFIFF.

* There are four films in this year's Cinema by the Bay section, highlighting the works of local filmmakers. The one getting the most attention is Dikayl Rimmasch's Cachao: Uno Más, a new documentary about the Cuban music legend. Director Rimmasch, Cachao himself and producer Andy Garcia are all expected to attend the screening. The other films are Barry Jenkins' Medicine for Melancholy (a favorite at the recent SXSW, for which Michael Guillén interviewed Jenkins), Logan and Noah Miller's Touching Home (starring Ed Harris and Brad Dourif), and Mock Up on Mu, the latest from experimental filmmaker Craig Baldwin.

* Each year the Castro Theater calendar provides an early peak at some festival titles. The latest calendar just hit the streets (and was posted on-line), so I'm hardly revealing state secrets by reporting these five festival programs:

- A newly restored print of the 1945 Technicolor-noir classic Leave Her to Heaven, starring Gene Tierney and Cornel Wilde.

So that's everything we know so far, and it's quite an impressive start, I think. We'll know the rest in a few days, but meanwhile here's a list of 20 films I'm really jonesing to have appear in the final program. They've been culled from a much longer list of 2007/2008 films that have caught my attention since last year’s festival. (Had they not already been announced, The Last Mistress and In the City of Sylvia would certainly have been among them.) My dream festival, in alphabetical order:

Finally, here are several terrific films I saw in Palm Springs, all of which I hope come to the SFIFF for the benefit of local film-friends who have yet to see them. Most I'd happily watch again, given the opportunity:

Marina, so good to hear from you. I hope all is well with you? I'm embarrassed to admit that I know nothing about Maria Bello. Can you recommend any other titles I should preview to prepare me for The Yellow Handkerchief?

As for Maria Bello....recently she's been quite good in "A History of Violence", "Thank You for Smoking" and even "Butterfly on a Wheel" (aka "Shattered" for American audiences) - not a great film but a good performance from her. I also really enjoyed her role in "The Jane Austen Book Club" which was a bit of fun and I'm anxiously awaiting "Downloading Nancy" which is due out later this year. It's not been getting a lot of positive attention but I think it looks quite good.

Before "A History of Violence", the only other film I recall seeing her was "The Cooler". There's a load of good titles for you! :)

And I just noticed your hat tip to "I Just Didn't Do It". I really loved that film.

Nice wish list, Michael. A few (possibly disappointing) disqualifications. INSIDE will be released on DVD next week, and JAR CITY is currently available from IFC Festival Direct PPV, so both titles are unlikely to show.

But you never know.

THE MAN FROM LONDON, on the other hand, is a virtual lock.

Yellow Handkerchief is pretty great. Bill Hurt is excellent in it, as are the two young actors: Eddie Redmayne (who's also in Savage Grace) and Kristen Stewart. Maria is superb in it. She appears almost exclusively in flashbacks and really adds the emotional energy that the more languid present-day scenes need.

As for your SFIFF51 wish list, Michael, some of it will certainly come true.

Downloading Nancy is a doozy. I blogged about it from Sundance. Maria Bello is good as usual, though. SFIFF will be my chance to catch The Yellow Handkerchief (perhaps).

Thanks for your comments, everyone!

Unfortunately, I have to work the night of Maria Bello's tribute, but I'm sure this won't be the only chance I'll ever have to see YELLOW HANDKERCHIEF. Rob, DOWNLOADING NANCY does sound like a doozy. Variety called it "a forbidding and morbid piece of psycho-sadomasochism." I can't wait?

msic, you're probably right about INSIDE and JAR CITY. INSIDE just seemed like it would fit perfectly into the festival's midnight movie series (or whatever they're calling it this year). Slasher flix are rarely my thing, but the idea of watching Beatrice Dalle (who's plenty scary to begin with) terrorizing a pregnant woman on Xmas Eve is somehow irresistible to me. I realize JAR CITY is part of IFC's Festival Direct PPV series, which is a shame because none of those films will be getting a theatrical release. The Ken Loach film is also a part of that series.

Lastly and sadly, Israel "Cachao" Lopez, who was supposed to attend the festival in support of the doc CACHAO: UNO MAS, passed away last weekend at the age of 89.

Oh for crying out loud, I know who Maria Bello is--I've seen her in several of those films you've mentioned, Marina--I just didn't know who she is; hadn't given a name to a familiar face in other words. It's hard enough keeping the faces straight.

Sad news about Cachao. No doubt he's been called on to perform at a bigger and better gig.