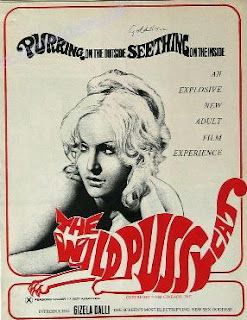 It's a testament to the trust San Franciscan audiences have in YBCA curator Joel Shepard's creative programming that they put money down to buy a ticket to a grindhouse double feature whose titles have been a closely-guarded secret. Of further note is that several key members of Bay Area press elected to catch Joel's program rather than the other hot ticket across town: SFIFF50's closing night feature at the Castro Theatre. To hell with Edith Piaf; give us grindhouse!!

Acknowledging that his is a belated riff on the Rodriguez/Tarantino vehicle, Joel seized the opportunity to augment his grindhouse doublebill with choice trailers from his personal collection of exploitation trailers. Joel negotiated with Austin's Alamo Drafthouse—whose Weird Wednesday screenings are the stuff of legend—and secured prints of The Wild Pussycat (1968) and Drum (1976).

The Wild Pussycat is a feral delight that had Joel's YBCA audience caterwauling with laughter. When this Greek sexploitation film screened at the Alamo Drafthouse last Summer, one audience member rushed to IMdb to pronounce: "[T]his black and white film is one of those great emotional European films that shows Americans how to passionately smoke cigarettes, and scream like an animal when the situation warrants it." Another Alamo Drafthouse attendee categorized it as a "surprise gem of melodramatic sleaze." I have to add that it's prrrrrrversely prrrrrrfect.

Poor Vera (Kathy Impro) is pathetically in love with her goodlooking boyfriend Nick (Dean Byron) who pimps her out to ugly old men to pay the rent and who—when he discovers she's pregnant—punishes her by gagging her and tying her to a chair so she can watch while he humps a new girl. Vera faithfully records Nick's sardonic treatment of her in her diary. Disgusted with her, Nick throws Vera and her belongings out into the street where Vera, in turn, throws herself in front of a car.

Too late to save her sister from Nick's callous treatment, Nadia (Gizela Dalli) arrives on the scene to claim Vera's effects; namely the aforementioned diary. Reading how Nick humiliated his sister (he sodomized her in front of a lecherous voyeur!), Nadia plots her revenge. It's all cat and mouse for the rest of the film. Gizela Dalli exudes a cool radiance as Nadia—part Candy Darling, part I Dream Of Jeannie, part Madonna—with prrrrfect eyeliner and prrrrrfect accessories to her mod wardrobe. But her most totemic accessory is a white fluffy pussycat who poses through the opening credits and whose startled reactions to some of Nadia's sexcapades brought the house down.

So how does Nadia get her revenge? Well, I'm not sure I should spell that all out. Suffice it to say that whereas in some countries "slut" means stop, that's not the case with Nadia who uses sex, sex and more sex to lure, capture and torment cocky Nick who doesn't remain cocky for long.

The Wild Pussycat is one of the funniest films I've seen in ages. Apparently, with only some minor changes, Joe D'Amato remade the film as one of the Emmanuelle movies. Entertainment value aside, what further intrigues me about this film is that it nailed the "girls kick ass" meme long before Tarantino's Death Proof. It's wonderful that some of these grindhouse features are being re-evaluated and that curators like Joel guide the way. He gets a big gold star for this one.

I was glad to see the Yacoubian Building last night, but somehow I think I'd have enjoyed this more. Oh well.

SF is frequently a cinematic embarrassment of riches, isn't it? It was great fun running into you at the closing night party. I didn't realize until I got outside and away from the band noise that I was reelingly drunk. I can't put a hot bird in a cold bottle like I used to.

I am surprised that I didn't see you there last night. It was loud and hot like always, so I left early.

I can't believe you just said "To hell with Edith Piaf" Hehe. I thought you like her. :)

Tony, I'm sorry we missed at the party. I was adding more syllables to every word than I thought humanly possible. I actually arrived late, almost 11:30.

I arrived starving. When I realized there were only cubes of swiss cheese and the random shrimp to be found, I quickly switched to the highly nutritive martini olive.

I love Edith Piaf. We're like THIS. (Image of Michael's fingers wrapped around each other.) But the poor dear is dead and it really doesn't matter if I say fickle things about her. I'm no different really than any other American.

I certainly did see Drum, Peter, and it warrants its own post whenever time allows. It wasn't quite as fun as The Wild Pussycat--sexploitation of a more racist kind--but, I'm glad I saw it.