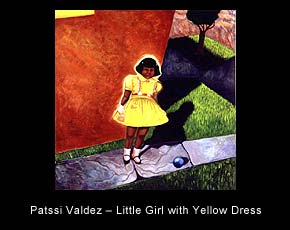 From July 22, 2006 to October 22, 2006, San Francisco's Mexican Museum in collaboration with the Fine Arts Museums presents Chicano—two distinct but related exhibitions of Chicano/a culture and painting as they have emerged in the wake of the Chicano movement for political and social change during the 1960s and 1970s. The exhibitions come to the M.H. deYoung Museum as part of a national, 15-city tour. San Francisco's Rene Yañez was the Curator of the Chicano Visions exhibition and consultant for Chicano Now.

Chicano Visions: American Painters on the Verge as Collected by Cheech Marin is largely based on the comedian and actor's private collection, reflecting those aspects of Chicano culture and the artists that most interest him. The exhibition brings together 26 Chicano/a artists from across the Southwest, including Californians Carlos Almaraz, Chaz Bojorquez, Diane Gamboa, Margaret Garcia, Rupert Garcia, Gronk, Carmen Lomas Garza, Ester Hernandez, Frank Romero, and Patssi Valdez.

Chicano Now: American Expressions was conceived as a way to immerse viewers in the creative ambience of Chicano urban experience. It is a multifaceted series of interactive installations by comedians, writers, video documentarians, filmmakers, painters, graphic designers, performance artists, musicians, and scholars of Mexican descent.

The de Young will also be exhibiting Chicano Encounters: Local Places and Global Communities, organized in cooperation with the Mission Cultural Center for Latino Arts in San Francisco. This exhibition supplements Chicano Visions and Chicano Now by giving special attention to the contributions of Bay Area artists. The exhibition features 55 prints and posters that place Chicano/a history in a global and local context through an engagement with other Latino cultures, hybrid identities, and international struggles that unite to form the culture and history of San Francisco's Mission District.

Starting Saturday, July 22, docent-led tours of Chicano Visions, Chicano Now and Chicano Encounters will begin at 1:30pm, Tuesday-Sunday. These tours are free for deYoung and Mexican Museum members and no reservation is required.

Of special note is that the deYoung will be open free of charge from 9:30 am to 5:00 pm. on opening day with a party beginning at noon, featuring the live music of Dr. Loco's Rockin' Jalapeño Band, La Familia Peña-Govea, the John Santos Quintet, and the high-energy dancers and percussionists of Loco Bloco. A formal program featuring Cheech Marin and local dignitaries, and an interactive mural project are just some of the other exciting activities at this special opening event. All are welcome!

There's no reason why any of you should know this, but I have a notable collection of Chicano and Latino art, including works by Patssi Valdez, Tony DeCarlo, Mario Romero, Viva Paredes, Evelyn Orantes, Joaquin Newman, Yolanda Lopez, Artemio Rodriguez, Calixto Robles and several others. My collection—which I nickname Rojo—was essentially kickstarted by Cheech Marin's example and so I am especially delighted to have the opportunity to savor his impressive collection more fully.

Long-time friend and collaborator, Tere Romo, curator with The Mexican Museum, has pulled together a film/video series to complement the exhibitions. Structured as three thematic Friday evenings over the course of the exhibitions, each program begins at 6:30 in the deYoung auditorium and is free after museum admission.

Yo Soy Chicano—Jesús Treviño, 1972, 60 min.
This is the first nationally broadcast documentary about Chicanos. Music, art, interviews and sepia-toned historical re-creations are interwoven to chart the Chicano experience from the pre-Columbian era to the civil rights activities of the 1960s and 1970s.

Remember Los Siete—Veronica Majano, work in progress, 10 min.
A preview of Majano's short experimental documentary about the seven Central American young men from the Mission District in San Francisco falsely accused of killing a white undercover police officer in 1969, which galvanized the Chicano movement in the Bay Area.

When You Think of Mexico: Images of Mexican in the Mass Media—Yolanda Lopez, with Carl Heyward, 1986, 28 min.
This video offers an artist's view of how the entertainment industry, food manufacturers, and other corporate interests create mythic Mexicans. It presents an analysis of the "good" (picturesque) Mexican and the "bad" (illegal) Mexican; and shows how symbols deliver their meaning both overtly and in a more subtle manner through an unspoken cultural context.

Cronica de un ser (Chronicle of a Being)—S.M. Peña, 1990, 7 min.
This video "samples" Licking the Greasers (1915) with contemporary video footage in its exploration of colonialism, media stereotypes and gender issues and their impact on Latino identity.

Pretty Vacant—Jim Mendiola, 1996, 33 min.
The film tells the story of a Sex-Pistols-obsessed Chicana punk rocker who publishes a zine and struggles to investigate the Pistols' infamous gig at San Antonio redneck bar Randy's Rodeo. It's a sly take on adulation and identity.

Columbus on Trial—Lourdes Portillo, 1992, 18 min.
In this political satire featuring the comedy trio Culture Clash, sharp dialogue, physical comedy, and state of the art video techniques are used to dramatize a mock trial of Columbus in a present-day courtroom. With a "Spanish-by-way-of-Mexico" judge presiding, Columbus on Trial hits on the complexities of Latino identity in America while slicing into the kitschy consumer icons and buzzwords that stand for racial and ethnic identity in contemporary society.

Corn In The Front Yard—Al Lujan, 2001, 11 min.
A male nurse attends to a woman who had major plastic surgery paid for by her gay son. It also stars a hysterical Latino real estate queen who laments the loss of the neighborhood, as she herself becomes a mover and a shaker.

Why Cybraceros?—Alex Rivera, 1998, 5 min.
Why Cybraceros? is based on a promotional film produced in the late 1940's by the California Grower's Council, titled Why Braceros? Rivera uses footage from this old industrial to briefly lay out the history of the Bracero Program in the United States. At the half way point the piece takes a sharp turn as the narrator advocates a futuristic Bracero Program in which only the labor is imported to the United States.

Ozzy Goes to the Alamo—Jim Mendiola and Ruben Ortiz Torres, 2001, 5 min.
This duo claims this film to be "the world's first Chicano 3-D movie."

Lupe & JuanDi from the Block—Fulana Collective, 2003. 5:06 min.
Inspired by La Virgen de Guadalupe, San Juan Diego, and Nuestra Señora de J-Lo, this music video was created to answer burning questions, such as: What's up with these designer Virgen de Guadalupe jeans?, How come El Indio Juan Diego became a white man for his saintly Vatican image?, Is the Pope concerned about losing the Latino market?, and Are we fooled by the props G-Loop's got? Is she, is she, Lupe from the Block?

Larry Landia—Karim Scarlata, 2005, 17 min.
A wry and visually compelling story of a young Mission resident Chicano, Larry who fancies himself an eagle warrior as he grapples with love, the legacy of colonialism, the metaphysics of basketball, and the sacrifices one must make in life in order to make relationships work.

Fascinating, and in my neck o' the woods too. I've been inside the new DeYoung screening room and was mightily impressed with the layout. Haven't caught a film projected there yet. Hopefully I'll be able to check at least one of thses out.

I haven't seen the new screening room either so this series will be my initiation. Looking forward to it.

WE LOST A GREAT CHICANO LEADER..ONE WHO WAS AND STILL IS PASSIONATE ABOUT CIVIL RIGHTS...AND IT ALL BEGAN IN SAN FRAN 1969. MY FATHER VICENTE G. GONZALES WAS MURDERED ON JUNE 29TH ,2005..WE WILL MISS YOU DEEPLY